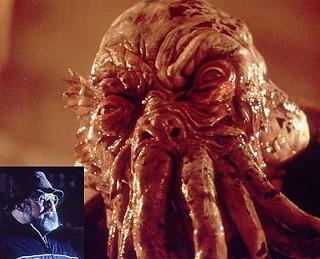 Once you've seen it, you never forget it. "It" is the scene in the film adaptation of H.P. Lovecraft's Re-Animator in which the walking dead university professor (played by David Gale) takes his severed yet gooily libidinous head and places it -- talking, nonetheless -- between the twitching loins of his nubile and nude young victim (the ever-game Barbara Crampton), bringing a horrifically hilarious new spin to the term "giving head."

Really, now -- what kind of sick mind comes up with this stuff?

That would be director Stuart Gordon, who'll be in attendance at the Alamo Drafthouse Downtown this Saturday to present his new film Dagon, the third (or fourth, if you count Bride of Re-Animator) in his ongoing series of Lovecraft adaptations which gleefully combine outrageous gore effects with sublimely silly comedy -- call it splatstick.

Long before the filmic grue took off, however, Gordon made a name for himself by founding Chicago's famed Organic Theater Company, home to Pulitzer Prize-winning playwright David Mamet and a host of celebrated actors such as Joe Mantegna and Dennis Franz.

We spoke to Gordon about his early days, his affection for Lovecraft, and why Peter Pan is really a metaphor for the Freaks vs. the Man. Trippy, indeed.

Austin Chronicle: You're from Chicago's northwest side. Was that a horror-movie mecca when you were a kid, in terms of hanging out at the Saturday matinee?

Stuart Gordon: One of the first horror films I ever saw was The Tingler by William Castle, and in its initial run, when there'd be a scary moment in the film, the theatre seats were wired to give you a mild shock and your seat would start moving around. That had a big impact on me -- I was out of that theatre in five minutes and running down the street. The big joke was that I left my younger brother in the theatre and he's given me a hard time about it ever since.

AC: Let's talk about your work with the Organic Theater Company, which you founded.

SG: Well, we did a number of plays at the Organic Theater that were horror-inspired; in fact, we did one called Poe that was based on his life and writings. We did science fiction -- a trilogy called Warp -- and Kurt Vonnegut's The Sirens of Titan.

AC: I noticed that on the Internet Movie Database's biographical listing for you they mention something about a "nude, psychedelic version of Peter Pan" while at the University of Wisconsin. Do tell.

SG: It's kind of hard to imagine it now, but that was back in 1968 during the Democratic Convention in Chicago, and there was a lot of protesting against the war in Vietnam -- the police came in and broke heads -- and I was there for that. I realized that you could take Peter Pan and turn it into a political cartoon about that without changing a line of dialogue in the play. So when he talks about sprinkling pixie dust and thinking lovely thoughts that was supposed to be an acid trip, and so for the trip to Neverland we had a psychedelic light show projected on the naked bodies of seven female dancers while we played "In-a-Gadda-Da-Vida" in the background.

AC: I shudder to think of what the dean made of all this ...

SG: The dean was actually okay with it, but, when the word got out about the production, the district attorney showed up and declared it obscene. He wanted us to shut it down, but of course we felt that that was a violation of our free speech and so we went ahead and continued to perform the piece, the end result being that my wife and I ended up going to jail. It never came to trial, thankfully, because our defense attorney discovered that the guy who had brought charges against us was a convicted child molester!

AC: Tell me about your relationship with David Mamet. That started at the Organic Theater, right?

SG: Right. We started the Organic Theater right after Peter Pan, and we moved it to Chicago because we were getting hassled by the police so much in Madison -- half our audience at every show was police officers. So we moved to Chicago, and that's where I met Mamet. He was this young writer who every week would come in with a new script for me to read. He'd hand me a script and say, "Stuart, this is going to win the Pulitzer Prize," and I'd go, "Yeah, right." We took two of his plays and put them together and that ended up being Sexual Perversity in Chicago, which was his first professional production, in 1973.

AC: Were you influenced by the Parisian Theatre du Grand Guignol?

SG: Oh yeah, and we did a lot of blood effects on stage.

AC: Why this affection for the wet stuff?

SG: I think it's because I'm really a coward. My wife is always kidding me about the time our dog stepped on a piece of glass and cut his paw and I got woozy. If it's real I have a hard time with it. That's why I'm so generous with it onscreen.

AC: Have you found that to be the case with other directors of horror films?

SG: It is true with a lot of them, including Wes Craven. I was at a screening of Reservoir Dogs, and I ran into Wes in the restroom, and he said, "I'm not going back in there." I couldn't resist -- I had to say, "But Wes, it's only a movie." It was too real for him, though.

AC: In 1985 you made the leap into film with Re-Animator. How did that come about?

SG: Well, when I was a teenager I made little movies but I never went to film school and I never had any formal training. I was very lucky in that I had people around me that knew what they were doing. The original idea was to do it onstage at the Organic Theater, but the board of the theatre felt that was not the proper script to be doing.

AC: Why H.P. Lovecraft? I would think that his somewhat purple prose would be difficult to translate to the screen, but you've done quite well with it, especially in Dagon, which really captures that brooding, claustrophobic sense of atmosphere.

SG: Right, but his ideas are so great. He suggests the idea that there are all these sorts of worlds around us that we're unaware of, and I find that idea very provocative and very cinematic.

AC: Tell me how Dagon came about. It's been a while since your last Lovecraft adaptation [1986's From Beyond].

SG: Dagon was actually supposed to be the next film after Re-Animator -- it was written in 1985 and ended up taking us 15 years to get it made. The studios had a real hard time with the concept of the film -- one studio actually told me, "If you make it into a werewolf movie we'll do it!" So you can imagine what we were up against. Brian Yuzna, who produced Re-Animator, called me up one day and told me he thought we could finally get Dagon made through this Spanish company he's affiliated with, Filmex, where he has a division called the Fantastic Factory, and that's how we finally got the film made.

AC: Have you ever thought of having David Mamet write a horror film for you to direct?

SG: That's a good idea. He did come close with that movie The Edge, with that big bear. That was pretty horrific. That's a great idea, though.

AC: Well, get on it already!