A Slice from The Seattle International Film Festival 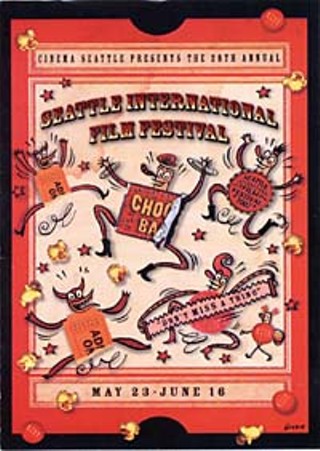 I just flew in from the 28th annual Seattle International Film Festival and, boy, are my eyes tired. The three-week-long festival (actually, 25 days) showed more than 250 films from more than 50 countries, which makes SIFF one of the largest -- and undoubtedly longest -- film festivals in the world. Although a festival visitor like myself who hasn't an entire month to spend in Seattle might feel initially daunted by the size and scope of the offerings, that sensation quickly dissipates upon taking the plunge. This is a film festival for film lovers, programmed by the film lovers of Cinema Seattle, the local film society. Furthermore, the films are organized into a wide-ranging schemata of sidebars, topics, and special interests, making the vast selection process more user-friendly.

Still, with only one week to sample the goodies, it was hard to leave town without feeling that I had only experienced a fraction of what SIFF had to offer. In a way, that's like complaining about having only one slice of delicious pie instead of the whole dish. SIFF can be sampled at gluttony level only by Seattle residents. Out-of-towners have to content themselves with a wonderful repast.

The film that best summarized this predicament is Cinemania by Angela Christlieb and Stephen Kijak. A delightful documentary, Cinemania focuses on several New York City film junkies whose lives are completely organized by the principle of seeing as many movies in each day as possible. What at first seems like a harmless addiction soon reveals its pathological underpinnings as they scour subway schedules and plan their lives in an almost obsessive-compulsive thrall of figuring out how to constantly cram in three or four movies every day.

One of the most outstanding films I saw was Fast Runner: Atanarjuat, a movie that has been touring the festival circuit and is scheduled to open in Austin at the Dobie Theatre later this summer. Based on Inuit oral legend, this nearly three-hour-long epic by Zacharias Kunuk is filmed entirely in the Inuit language and uses a completely indigenous cast. Unlike Nanook of the North, the early Robert Flaherty documentary that is practically the only well-known movie in film history shot among the Inuit population, Fast Runner is both site-specific and universal. The charismatic lead actor and fellow cast members transmit a universal story about love, family rivalry, heroism, and myth that also provides a wealth of ethnographic detail and epic panoramic images that rival David Lean's deserts in Lawrence of Arabia.

SIFF's selection of new Asian films has to be one of the best and most comprehensive on this continent. In fact, this year the festival even introduced a new "Asian Tradewinds" sidebar and competition into the mix. By placing oneself in the hands of the knowledgeable SIFF programmers, this aspect of the festival can provide a whole education in itself. With my abbreviated schedule, I didn't get to sample much, but one of the films I saw here made a most lasting impression: Takashi Miike's The Happiness of the Katakuris. Miike was honored by SIFF with an Emerging Masters tribute, and I was somewhat familiar with this astonishingly prolific Japanese filmmaker (he makes something on the order of four to six movies a year) because of the two films of his brought in by the Alamo Drafthouse in recent months, Audition and Visitor Q. A filmmaker known for his penchants for stylistically impressive treatments of erotica and violence, The Happiness of the Katakuris is unexpectedly a musical, a comedy, and a soap opera -- albeit shaded with Miike's perverse touches. It was a tasty slice of SIFF pie that came a la mode.