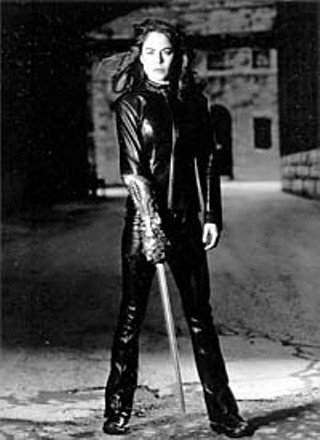 There are two undeniable truths about me: I'm a sucker for action-adventure series, and I'm no fan of cop dramas. Buffy the Vampire Slayer, Alias, and 24 top my must-watch list. But I've never been able to get into Law & Order (I can't stand that metallic gavel sound between scenes), and NYPD Blue bores me. Two new cable series have changed my take on these genres.

First on the list is Witchblade, the TNT drama that enters its second season this Sunday with a two-hour season premiere. Yancy Butler stars as Sara Pezzini, a New York City homicide detective whose destiny is to be the next wearer of the Witchblade, a mysterious gauntlet that morphs from a bracelet to an arm-length weapon. Not only does the weapon give her strength, it allows her clairvoyant skills and, as it turns out, the ability to manipulate time. When she learns about this last gift, she chooses to return to the time just before her partner Danny (Will Yun Lee) was killed (which occurred in the series' premiere episode). She steers him away from the events that led to his death, allowing him to remain her flesh-and-blood partner, as opposed to her spiritual guide as he was last season.

Give me a break. The important thing about action-adventures, particularly those with heightened realities (The X-Files, Buffy the Vampire Slayer), is that there are rules that must prevail, or else the foundation of the fictive world is weakened. For as much time and energy that is put into reminding viewers that the Witchblade is a profoundly powerful and holy relic, wouldn't it make sense that when Pezzini turned back time, there would be some repercussions? Instead, she gets her partner back, still has her powers, and is still hunted down by those who wish to steal the Witchblade -- yet she doesn't remember them from last season.

"As a result," claims Executive Producer Ralph Hemecker, "the second season is going to be a cleanly tracking story for new viewers to the series, while for the core audience, it will be a bit like Groundhog Day -- some things will be similar, but many elements are going to be new." If you say so. But in my mind, this manipulation smacks of desperate backpedaling. It was a bad move when Danny was killed in the first episode. Lee and Butler have a good chemistry, so it's good to see them working as flesh-and-blood partners, but the device to reunite them is cheap and disappointing.

I was enamored of the show's netherworld qualities when it premiered last year, but this second season premiere is overwrought with its own sense of mystery. And it lasts two whole hours. Let's hope the show will regain its footing as the new season kicks in.

The second season premiere of Witchblade airs Sunday, 7pm, on TNT. It moves to its regular Monday time slot on June 24 at 8pm, with encores on Tuesdays at 10pm.

As for cop dramas, I've never been much of a fan since Hill Street Blues, but HBO's The Wire may bring me back to the fold. This meticulously (some might say tediously) drawn drama set in Baltimore follows a team of detectives reluctantly charged to break up a drug ring in the Baltimore public housing projects. Because the ensemble cast is so huge, it's initially difficult to keep track of who is who, but the show is slowly, deftly defining characters and in the process showing that what separates the good guys from the bad guys is not so distinct.

Created and produced by David Simon, who won an Emmy for the HBO miniseries The Corner, The Wire promises to offer a complex and provocative view of life in the drug war trenches, where "just say no" is little more than a punchline.

The Academy of Television Arts and Sciences will announce Emmy nominees for the 2002 season on Tuesday. The Primetime Emmy Awards ceremony will take place Sept. 22.

Oops, I Did It Again

Rosemary -- a "TV Eye" reader, but more importantly, a fan of The Chris Isaak Show -- recently wrote to set me straight on my recent review of the show. First and foremost, Mona (Bobbie Jo Moore) is not an "imaginary confidante" as I indicated, but, as Rosemary says, "a real woman who pretends to swim on a large blue-green (not red) turntable in the basement of Bimbo's while her image is projected into the fish tank upstairs."

Hmmmm ... Something about Chris Isaak talking to the backside of a naked women creeps me out. Plus, how much is she getting paid? Is it an eight-hour workday? Does she have to worry about repetitive motion syndrome? Does she get dental? And how does she sometimes know what Isaac is thinking before he speaks, especially in the episode when he had laryngitis? With Mona as a figment of Isaak's imagination, I don't worry about these things. Well, Rosemary has been watching the show from the beginning, so I'll take her word for it. One more thing: The Chris Isaak Show airs on Tuesdays at 9:45pm on Showtime.