The Ultimate 'Goonies' Experience -- Like the Very First Time 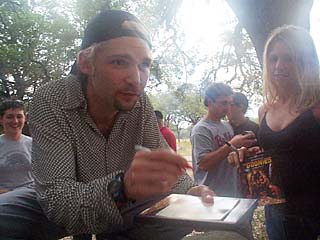 It didn't matter how many times you'd seen it before. Last weekend was different. Last weekend was special. It was like being touched by The Goonies for the very first time. And if you were especially lucky and in possession of especially sharp elbows with which to ram your way through the crowd, then maybe you were touched by a Goonie -- in the flesh -- for the first time as well ... at least, outside of those adolescent, "two Coreys means twice the fun" fantasies.

Goonies fans gather to truffle shuffle their way into Longhorn Cavern for the 200-ft. descent. (Photo By Kimberley Jones)

The Alamo Drafthouse screened the 1985 classic kiddie pirate tale Friday and Saturday, June 7-8, as part of its foundling Rolling Roadshow series. Sounds unremarkable enough, until you start tossing in the prepositional phrases: in a cave 200 feet below ground. With cole slaw, beer, and Baby Ruths ... and Corey "Mouth" Feldman.

Burnet's Longhorn Cavern played host to the event, as the lucky few shuffled below ground, blankets and lawn chairs in hand. Truffle shuffled, to be exact -- Drafthouse owners Karrie and Tim League gleefully insisted that, before entering the cave, all filmgoers do the trademark belly shake of Goonie Chunk: 1.) Lift shirt. 2.) Jiggle fat. (For further instruction, visit "Past Events" at www.rollingroadshow.com/index2.html for a QuickTime montage of Central Texans' very own truffle shuffles.) From there, participants filed into the cavern: The temperature (68 degrees) was frigid for the sweater-less, the ground was hard for the lawn chair-less, the film required several distracting reel changes, and the scattershot acoustics meant those in back had to strain to hear over the whir of the film projector, and those in front got blasted out. And yet -- and yet -- the Ultimate Goonies Experience was just that: the ultimate in ridiculously cool. It was two hours of cave dwelling and camaraderie, rock perchers laughing, groaning, hollering, and howling in sync.

After each of the four screenings (which sold out almost instantaneously), the shuffling began anew, out to the campsite for hot dogs, barbecue, and beer. (Reassuringly, you can take the Alamo out of the house, but never the draft out of the Alamo.) Then came Corey Feldman -- proof that Goonies never die, they just grow up to be former child actors. A gracious and animated Feldman, appearing sans his signature mullet, addressed an affectionate crowd, Q&A'ing all the fanboys and girls into a wet melt. Currently on tour promoting his new album (apropos, titled Former Child Actor), Feldman popped in for each show, addressing crowds either before or after the screenings. His Friday evening schtick mainly revolved around the long-rumored Goonies sequel (he promised the crowd, "if we're going to do it, then we're going to do it right, or not at all"), but he also touched upon his on-again, off-again feud with former playmate Michael Jackson. Quickly breaking it down for the audience, Feldman explained that, on September 11, Jacko chartered a tour bus in order to get his nearest and dearest out of New York City safely; still fuming at a recent squabble, Jackson denied Feldman entry to the bus, but the Jackson family smuggled him on anyway. (The Jackson family denies the account.) Apparently, the slight really got to Feldman, because he's written a new song, called "Megalo-Man," that serves as a "private message" to his onetime friend. Surreal enough for you? Not yet: Feldman capped it all off with an improvised moonwalk atop a picnic table. As for choice bits from the other Q&As, Tim League did reveal that, after he got up the gumption to ask Feldman how the "Haimster" was doing -- that'd be the other Corey, Corey Haim, Feldman's frequent Eighties co-star and partner-in-crime -- Feldman shot back by calling Tim a "retard." Truffle shuffle that, Mr. League.

But then, it was all in good fun, the very purpose of the event and every other one of the Rolling Roadshow's whacked-out, genius schemes. Up next will be a bowling lane viewing of the Coen Bros.' The Big Lebowski (rental shoes and a White Russian included) and a possible lakeside screening of the newly remastered Jaws. The Leagues just purchased an inflatable screen ("blows up in six minutes!"), and they're toying with the idea of plopping filmgoers in inner tubes and adding some interactive elements -- no doubt, something intended to scare the trunks off the audience and, no doubt, something that will qualify as the ultimate in ridiculously cool.