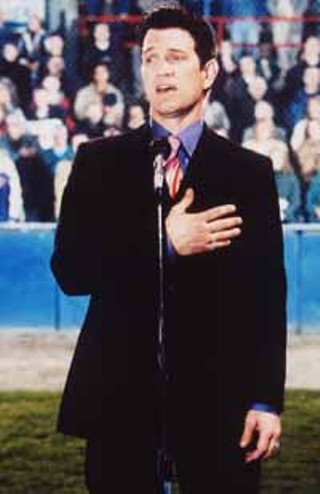 As a TV critic, this is the time of year I say: Thrill me, and make it snappy. If promotional materials for a new TV series or movie say "heartwarming," "thrilling," or "will keep you on the edge of your seat," it darn well better. It's summertime. Why would I want to sit in front of my small screen when I could be out being heartwarmed, thrilled, or kept on the edge of my seat at a large-screen movie theatre -- or better yet, shopping for shoes?

It's also a time I plow through the piles (and I mean piles) of network-provided screener tapes to see what can be discarded, or if anything has been overlooked. And boy oh boy, like Sex and the City's Carrie Bradshaw finding a forgotten pair of sandals in the back of her closet, I came across a stash of The Chris Isaak Show tapes from Showtime. I'd been meaning to review the tapes, especially since I don't subscribe to Showtime, but the timing was always off. Imagine my delight when I discovered that this series refreshes like mint lotion on a sunburn. The Chris Isaak Show is already in its second season (it launched in March), but four new episodes are promised this month.

What makes this show a keeper is the delightful blend of fact with fiction, fantasy with reality. At the forefront is Isaak, who plays himself, a guy who loves to sing, surf, and commiserate with Mona (Bobby Jo Moore) in the most wonderfully absurd element of the show. Mona is Isaak's imaginary confidante, an incarnation of the naked swimming lady whose image is reflected in a large fish tank behind the bar at Bimbo's, the club where Isaak and his band the Silvertones regularly play. In Isaak's mind, Mona listens to Isaak's woes, laying on her stomach on a rotating, red velvet pad. But instead of intoning "there, there," Mona pricks his ego when needed and calls him on his bull, which is usually when he's acting the most boneheaded about a situation.

As a leading man, Isaak is charming and self-effacing without being pathetic. The Silvertones -- Kenney Dale Johnson, Rowland "Roly" Salley, and Hershel Yatovitz -- also appear as themselves with an added fictional bandmate named Anson (Jed Rees). Anson is the stereotypical musician, using "I'm in the band" to snare babes at every chance. But because he's so comically stupid, he avoids being a complete jerk. Rounding out the cast is the lovely Kristin Dattilo who plays the band's high-strung manager Yola.

The June 11 episode, "Home of the Brave," finds Isaak at first flattered when asked to sing the national anthem at a baseball game, until he remembers an earlier performance when he mangled the words and sang off key. Fearful of repeating the past, he develops laryngitis, putting his other gigs in jeopardy, but attracting the attention of a woman, who, it turns out, likes the silent Isaak better than the vocal one.

New episodes of The Chris Isaak Show air on Tuesdays at 9pm with reruns on Sundays at 9:45pm.

Season premieres of Stargate SG-1 and Farscape kick off Friday, June 7, on the SciFi Channel. Stargate begins at 8pm, followed at 9pm by Farscape. Other "sci-lights" include the premiere of Night Visions, a new anthology series featuring stories with horror, occult, and supernatural themes. Henry Rollins hosts the show, which launches June 14 at 8pm on the SciFi Channel... Cheesy TV Movie alert: What do you get when you cross a nuclear power plant with two tornadoes? Why, Atomic Twister, a new TBS movie. Sharon Lawrence stars as the supervisor of a nuclear power plant on the verge of a meltdown when hit by tornadoes. Mark-Paul Gosselaar (NYPD Blue), Corbin Bernsen (L.A. Law), and track-and-field Olympic gold medalist Carl Lewis also star. As a special-effects flick, Atomic Twister is weak. And poor Carl -- not only does he not outrun the twister, but when Lawrence's character finds his carcass, she leaves him behind like a lost bag of laundry. For the rest of the film, I imagined him sailing through the sky (well, it is the movie's recurring motif). Sorry if you think I've ruined it for you, but with the corn-doggy music, cheese-doodly dialogue, and connect-the-dots story, this movie is as predictable as sunrise and sunset, but not nearly as pretty. It's the best bad movie I've seen in a while, meaning you can't help but make fun of it while you watch. Atomic Twister premieres June 9 at 6pm. Encores are June 12, June 15, June 16, and June 22. Check listings for airtimes.