Michael Chamy gets caught in Spidey's web. On his Playstation2, that is. 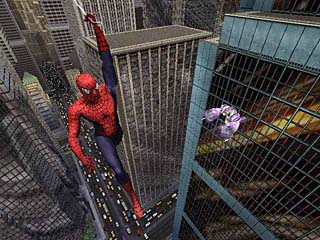 It was always an issue of legal rights that kept our webslinging friend on the big-screen sidelines. There's never been a question of the popularity of Spider-Man, whether in comics or on TV, live action or cartoon. Yet, as has often been said these past few weeks, the wait was a blessing in disguise. Only recently have the special effects come far enough to really deliver on the rooftop action sequences.

The same can be said of the gaming arena. There were a few Spider-Man games in the Eighties and Nineties, but nothing even close to this one, based closely on the Sam Raimi tour de force. Early attempts featured some two-dimensional wallcrawling, but never before has the gamer been able to experience what it's really like to be Spider-Man, to experience the exhilaration and difficulties of swinging from building to building. Activision has done a magnificent job, to the point where it's worth playing the game just for the rush of jumping off tall buildings, getting caught in a menacing free fall for hundreds of feet, only to shoot off a webline and pull yourself up, soaring through the air over the New York landscape.

Spidey's agility is rendered in top-notch form, too, with a mad arsenal of punch-kick-jump combos that diversify as you advance in the game. This in addition to four different types of deluxe web attacks, which use up fluid that you must replenish, and the basic sticky web attack, which has no limitations. The storyline roughly follows the film, with beautifully done graphic interludes featuring the likenesses of the film stars that you'll find yourself watching again and again. And then there's Tobey Maguire's voice, constantly wisecracking in vintage Spidey form, including some clever lines even better than any uttered in the film.

How many ways can Spider-Man poke fun at the geriatric Vulture? You'll bust a gut counting. That is, if the old buzzard doesn't kill you first. So in addition to the Green Goblin and his OsCorp lackeys, you'll encounter a number of vintage Spidey supervillians, as well as the standard-issue NYC thugs. The levels all involve a puzzle of some sort. It might involve negotiating a subway-tunnel maze, rescuing civilians, repairing structural damage with your webbing, or using your ceiling-crawling stealth abilities to their fullest. The degree of challenge is always there, yet there is just enough guidance (and Spidey sense) to avoid dead-end frustration. That is, unless you've been pumpkin-bombed by the flying Goblin, Willem Dafoe cackle and all, one too many times. During those difficult times, a warm cup of Aunt May's special soup comes highly recommended. You'll need the fuel for all those long swings across town.