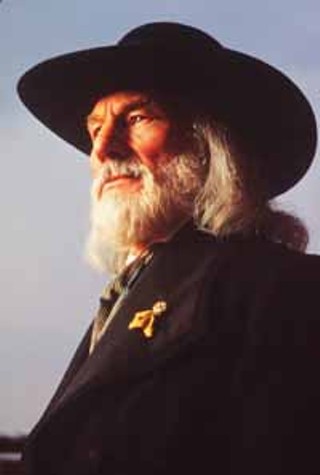 Patrick Stewart in King of Texas

Set in 1840s Texas, King of Texas is the newest in the stable of original dramas and the 12th Western produced by cable network TNT. Uli Edel (The Mists of Avalon) directed the telefilm.

The tagline, "Based on the play by William Shakespeare," ordinarily causes groans. Many have tinkered with the great Bard's works; few have succeeded. But the script, by Texas author Stephen Harrigan, is a respectable rendition of the great drama.

"Texas in that period was in many ways like the England of King Lear," the Austin-based Harrigan says in TNT press materials, "a wild and feudal place under constant threat of invasion from a foreign power. In Shakespeare's play, this threat comes from France. In the movie, there is an uneasy peace between Texas and Mexico."

Asked to pen the script from an idea originally proposed by Patrick Stewart (who plays Lear in the film), Harrigan had just finished eight years of research and writing The Gates of the Alamo. While the original King Lear provided the characters, plot, and themes, Harrigan added the necessary flourishes to transport King Lear from England to the wilds of Texas.

Stewart stars as the headstrong but tragically narrow-sighted Lear. In this rendition, he is an aging Texas rancher and hero of the U.S.-Mexican War. The classically trained Stewart brings a bullheaded crustiness to this cattle-busting Lear that obliterates any resemblance to his most well known performance as Captain Jean-Luc Picard from the Star Trek franchise.

Aging and ready to relinquish his land -- though not quite ready to give up his iron fist of authority -- Lear decides to divvy up his vast ranchland between his three daughters. To decide who gets what, he commands each to express their love for him. His two eldest daughters, Suzannah (Marcia Gay Harden) and Rebecca (Lauren Holly) perform well and are amply rewarded. When he comes to his youngest and most honorable daughter Claudia (Julie Cox), she refuses to participate in the game. Enraged, Lear disowns the one child who truly loves him, and sets free the greedy desire of his older daughters for power.

Cox's doe-eyed Claudia (King Lear's Cordelia) is suitably devoted to her father even in his exasperating cruelty toward her. As the eldest daughter Suzannah (aka Goneril), Harden is icy and unrepentant in her ambition to expand her newly acquired empire. Holly's Rebecca (aka Regan) is at turns vengeful or spineless, whichever is most convenient for the moment. Harden and Holly are especially venomous in the famous scene in which Westover (aka Gloucester, and played by Roy Scheider), is maimed for taking a stand against them.

In a supporting but significant role, David Alan Grier plays Rip (aka the Fool), a former slave and the only person who can speak candidly to Lear without inciting the storm of his temper. As in the play, he is the only character who sees the world as it is, while Lear (and Westover) is blind to the truth. Grier's scenes with Stewart are delightful, so it's a shame that he's used in cheap reaction shots or uttering lines like, "This is just like the damn Alamo." Or, "The fear got scared out of me at the Alamo."

Did I mention this takes place in Texas? The Alamo references are so thick, they could provide the foundation of a new drinking game. In the end, the references to the Alamo -- along with its contested history -- is a nuisance. The real story isn't about Texas (or ancient England). It's about humans strangled in their own webs. Yep, this is a tragedy. Nearly everybody dies, and those that don't probably wish they had.

Though Shakespeare's glorious poetry is not captured here, the performances and a spectacular scenic backdrop make up for it. King of Texas premieres Sunday, 8pm, on TNT. Encores are June 2, June 6, June 7, June 9, June 15, and June 16. Check local listings for airtimes.

You Oughta Be in Pictures

Submissions for the Austin Film Festival's Prime Time Television Competition are being accepted now through June 15. Sitcoms or dramas are eligible. Only $25 to submit. For more information call 1/800-310-FEST or go to www.austinfilmfestival.com.

The Sundance Channel seeks short films during its June Out Loud Film Festival celebrating gay and lesbian filmmaking. Short films (up to 40 minutes) containing lesbian, gay, bi-sexual, or transgender themes are eligible. The winning short will air on the Sundance Channel. Speaking of the Out Loud Festival, more than 30 films are featured this year, including the documentary feature The Cockettes, which premieres June 21 at 9pm, days before its national release. For more information on the Out Loud Festival or how to submit films, go to www.sundancechannel.com.

New to the Tube

Austin sculptor/artist and interior designer Jean Goehring appears in the June 5 episode of Junkyard Wars on TLC. The challenge for Goehring and his team is to build a mechanical mole that can drill through two concrete walls. The episode airs at 8 and 11pm on June 5 and June 9 at 5pm.

Austin attorney Mark Perlmutter consulted on Scared Silent, a Lifetime film based on a case he tried for four women seeking to bring a rapist -- and a cop -- to justice. Though a mediocre TV movie, the story is compelling. Scared Silent airs on Lifetime June 2, June 5, and June 8. Check listings for air times.