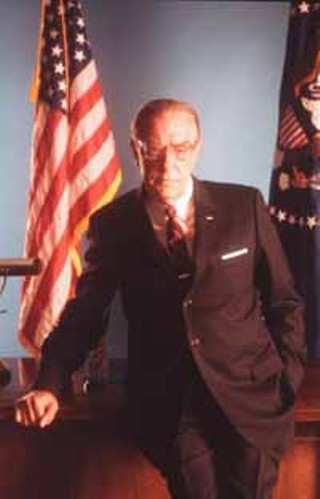 "It's a portrait of a president who had genuine dreams for this country," screenwriter Daniel Giat said of his new Vietnam-era film Path to War, a Greek tragedy of great but flawed leaders, chief among them then-President Lyndon B. Johnson (played by Michael Gambon, above).

For many who came of age during the Vietnam War, it meant living in fear of being drafted, of having to fight in an unpopular war and possibly come back in a body bag. It meant watching loved ones go off to war, but returning physically, psychically, spiritually damaged. For some, it meant taking to the streets to denounce the war. For others, it meant standing behind the nation: Love it or leave it. And then there were those ashamed by the U.S. role in the war, those who left the country vowing never to return.

Screenwriter Daniel Giat was old enough to be aware of the unease and anger of the period, wondering how the nation got into a war that everyone detested, yet seemed impossible to abandon. Like many, Giat believed that then-president Lyndon B. Johnson was to blame. But years later, after reading a New Yorker article discussing the escalation of the war and the decision-making behind it, he discovered that the truth was much more convoluted. So began his 11-year journey to write Path to War, now an HBO film starring Michael Gambon and Alec Baldwin. The biopic painstakingly re-creates the Johnson presidency following his 1964 landslide election, examining how he became branded by the most unpopular war in U.S. history. What Giat discovered was that Johnson was at the center of a Greek tragedy, full of great but flawed leaders, wise men whose counsel was clouded by pride, and lone voices of reason nearly forgotten by time.

"I wanted to tell an account of how this [war] happened and how much faith we put in our elected officials, the advisers they choose, and how a nation really goes to war," Giat said while in town for the Austin premiere of Path to War, his first produced screenplay. "It's not a conspiracy of single-minded men behind closed doors. A small group of men, and now women, debate on what measures to take and how far to go. It's an anguished process, and I believe these people have the best interests of the nation at heart. But these are also people with egos and reputations intent on preserving their own power and their position with the president."

If 11 years seems a long time to research and write a screenplay, it is.

"I wasn't very patient with the process," Giat admitted. "But I knew I was working on something important. I was really interested in the intricate drama behind men's actions, the underlying details. Eleven years ago if I'd known all that was involved but that this film would eventually star actors like Donald Sutherland and Michael Gambon, I would have been as patient as the Buddha."

Giat's research included many hours with eyewitnesses and players in the Johnson administration, including Clark Clifford (played by Donald Sutherland), Jack Valenti (John Valenti), and Joseph Califano (Robert Cicchini), as well as LBJ scholars and historians of the period. The archives of the Lyndon B. Johnson Presidential Library in Austin, memoirs by key administration officials, and 150 recently released memos and meeting notes from the Johnson administration also provided valuable background information.

What emerges in Path to War is an LBJ much more complex and sympathetic than his reputation as a warmonger would suggest. British actor Michael Gambon masterfully captures the famous bluster and good ol' boy persona of LBJ, with a gleam of ambitious idealism that is eventually poisoned with paranoia and self-doubt. Alec Baldwin plays the brilliant Defense Secretary Robert McNamara, who discovered how the war half a world away would bring pain to himself and those closest to him. As Johnson's closest friend and adviser Clark Clifford, Donald Sutherland is elegant and particularly riveting in a key scene when he reminds Johnson of his culpability in the war in spite of his personal wishes.

"It's a portrait of a president who had genuine dreams for this country and went a long way to eradicate racial discrimination and poverty," Giat said. "Although he surrounded himself with the best and the brightest, had he gone on his own gut instincts, we would not have been in the war."

At more than three hours long and with a cast of 30, the film is a demanding but intriguing view from inside the White House during one of the most turbulent times in U.S. history.

Must-Haves on DVD and VHS