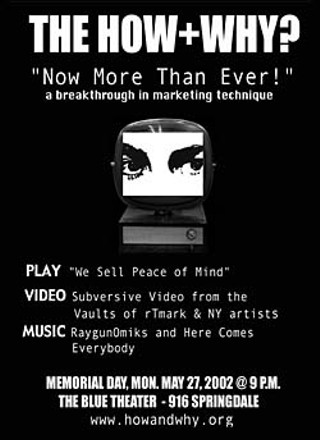 It's a desperate noise. The pop-up windows, the overly enthusiastic voice-overs, the replicants that hawk hair-loss prevention snake oil -- advertising is a sordid business. And it's from this business that the mostly local How+Why? art collective is drawing the inspiration for their next "infotainment" event, dubbed "Now More Than Ever!"

"Now More Than Ever!" will showcase advertising-related artwork ranging from the satirical to the abstract. The event features video work by media activists from the international ®™ark collective, who take on the likes of Mattel and the World Trade Organization. The lineup also includes local talent, with media manipulation videos by Austin-based artists Cathy Shive and Tyler Jacobsen as well as multimedia play We Sell Peace of Mind by local playwright Sean O'Neal. Shive and local filmmaker Jacqueline Passmore will also premiere a video described as a "modernist corporate-office-ballet" made for local electronic ensemble A Roman Scandal (featuring frontman Jason Reece of Trail of Dead). The evening is rounded out with video images by local youth artists set to live music by RayGunOmiks and TV-commercial karaoke, where audience members can record new voice-overs for their favorite ads.

"Everything interesting that comes out of American culture is now subsumed under advertising," says one How+Why? artist. (By and large, the How+Why? group tends to function anonymously due to the occasional unlawfulness of some of their projects.) "So, yeah, we've got really beautiful TV commercials, but art has been pushed to the margins." Or co-opted: The aesthetic codes of subculture (goth, skateboarding, hip-hop, etc.), originally intended to offend mainstream tastes, are now proven sellers in today's fractionalized marketplace. What we call a movement, advertisers call a target market.

It's not surprising, then, that rants against advertising have grown so commonplace. Adbusters magazine, famous for its send-ups of print advertising, has brought culture jamming to the level of grocery store-checkout legitimacy. Locally, you'll have to look no further than the Drag, where the ubiquitous poster ads for Diesel and the like are constant targets of Sharpie-wielding graffiti artists. Notable among them is local art-crime group ReTag (a kindred spirit of the How+Why?), which targets corporations that have achieved total market saturation, like the Gap, then "reproduces" the corporate logo over and over on a storefront, posting a memo on the door ("Your Logo Has Served Its Purpose"). The morning after a visit from ReTag, storeowners must have their own logos removed from the front of the store -- a delicious irony.

At "Now More Than Ever!" organizers say, art will co-opt advertising instead of vice versa. "We don't want to start a movement," says How+Why? founder Sean O'Neal. "We want to create an atmosphere that elevates discourse about the media. And, we want to put on a good show." "Now More Than Ever!" will take place at the Blue Theater (916 Springdale) on May 27 at 9pm. Tickets are $5 at the door. For more info see www.howandwhy.org or contact howandwhy@meowmail.com.