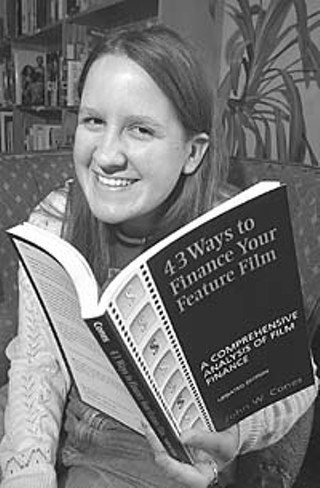 There are as many ways to finance your independent film as there are ways to shoot it, but Austin's vibrant filmmaking community and passion for the arts has traditionally made the city a fertile ground from which to draw funding. That said, perhaps more than any other artistic discipline, filmmaking -- even low-budget indie filmmaking -- requires ungodly amounts of cash that the vast majority of first-time filmmakers rarely have. The ideal financial resource will always be that dotty rich uncle who shuffles off this mortal coil, leaving behind a will with your name all over it, but let's face it: The supply of rich uncles has dwindled, and filmmakers these days are just as likely to score funding from a lucky lottery ticket as they are a rich relative.

There are other avenues open to struggling filmmakers, though, ranging from the Austin Film Society's Texas Filmmakers' Production Fund and the city of Austin's Cultural Contracts program to more guerrilla techniques such as benefits, bake sales, and the ever-popular (but ultimately risky and often self-defeating) credit card max-out.

Local filmmaker Kat Candler is currently seeking financing for her second film, a documentary on the American Youth Works program for at-risk kids. To that end, she's taken two approaches different from the ones she used for her award-winning debut feature Cicadas, including applying for the Cultural Contracts program and a recent trip to New York City to meet with potential backers.

This time out, Candler has applied to the Cultural Contracts program, which is under the aegis of the Parks & Recreation Department. Unlike a grant, these contracts -- which are offered in seven discipline categories ranging from dance to film (falling in the Media Arts category) -- make the participating artists city contractors, literally. That means their work can be held accountable to certain performance standards and completion times. (Grants, on the other hand, carry with them a certain freedom of choice for the artist; how the monies are ultimately used is up to the recipient.) Seeing as how the program awarded a whopping $3.6 million dollars to a total of 191 contractors last year, this is by far the largest source of artistic largesse in Austin, and not one to be overlooked.

The application process is lengthy and detailed ("It's hellish," says Candler), with an Ides of March registration deadline at the Dougherty Arts Center and extensive review by a six-person advisory panel.

"Compared to last year," says Candler, "when there were maybe two panelists in the film community, this year all of the panelists are from the film community, which I think is a really good thing. They know, for example, that it's going to cost you this much money for this many dubs of your film, and they have a personal history with film. This year's panelists were Rick Perkins, Susan Kirr, Sandhya Shardanand, Adam Joseph, Gary Kent, and Dave Gardner, all of whom have film experience to varying degrees."

Candler's recent New York excursion may be a bit more than many first-time indies will deem necessary, but for her it was both a crash course in dealing with the Suits and a way, at the very least, to generate a whole new group of contacts.

"Austin has so many talented directors, writers, and artists," she adds, "but for the most part we don't have a lot of producers here, and we don't have all that many business-minded people here who have the connections and so forth. We went to New York to meet these sort of people and to try and secure financing and a third producing partner for the project. We met with producers, we talked to Fine Line and Showtime and just anyone we could talk to, really."

When Candler pitched her documentary in New York, she found a host of receptive ears, which wasn't at all what she had expected.

"Our Showtime meeting was not what I'd call typical for this sort of thing," says Candler. "Before we met with any of these people, we sent them a script, we sent them a business proposal with a character breakdown, possible distribution outlets, a synopsis, and then a copy of my previous work. With Showtime -- it was our very first meeting -- we went to lunch with them, and the odd thing was that they ended up pitching our project to us. We didn't have to really say anything, strangely enough, and they just started telling us why they liked our project, why they thought it might work really well for Showtime, and so on -- it was totally bizarre, actually. ... It was a wonderful situation, but not at all typical of the usual process."

Still, all the prep work paid off. The most important part of the financing game is knowing in advance how much it's going to cost to do the film, Candler stresses, from the first word on paper to the first screening with an audience. Shooting a movie -- be it on DV, HD, or even that old standby, film -- is only part of the cost; post-production costs is where the bulk of the money is going to go. Taking into account every single possible budgetary concern is going to make the prospective financier that much more willing to give the filmmaker's project the additional credence that could mean the difference between a check and a pat on the back.

As for financing tips, there are scores of published material on the Web and at the corner bookstore, but "talking to other filmmakers has been our main channel of information," says Candler. "Other filmmakers who have done this sort of thing can provide a wealth of information that it might otherwise take you a long time to dig up on your own. And Austin's a really good place for that."

Producer Tamara Klindt has used both the Texas Filmmakers' Production Fund and the credit card method to pull in financing for her work on the anthology film Six in Austin and the futuristic 747 dogfight flick Jetblast, but notes that the problems inherent in those tempting credit card cash advances are a pitfall to be avoided.

"Jetblast was your classic credit card movie, which I don't recommend because it makes it four times more difficult to then go on to make your next project. It requires something to happen after you've finished the first project so that you can then pay off those exorbitant credit card debts in order to move on to the next project. You can't get any more credit because your cards are maxed out, and you end up having to work X amount of jobs to pay off that first film. I learned that lesson on an earlier project."

On the other hand, the TFPF, founded in 1996 by the Austin Film Society's Richard Linklater, Katie Cokinos, and Elizabeth Peters, is a resource that's tailor-made for the Austin film community and one that has awarded some $280,000-plus to Texas filmmakers since its inception. Funded chiefly by ticket sales from the AFS's ongoing series of major film premieres at the Paramount Theatre, the TFPF is a unique resource for struggling filmmakers, with a revolving panel of filmmakers who judge the yearly applicants and distribute a varying amount of money to an equally varying number of recipients. Candler received a $5,000 grant from TFPF in 2000 for Cicadas, and everyone from Hell House director George Ratliff (whose feature Purgatory County benefited from TFPF's largesse) to the various directors of Six in Austin have found the Production Fund to be a pivotal source of financing.

City contracts and granting organizations like the TFPF aren't the only way to go. Depending on the size of the film's budget, there's always the tried-and-true DIY method to securing funding, which includes everything from staging benefits and garage sales to (always popular in Austin) hoot nights and bake sales.

Local producer Chris Meister recently staged a benefit evening at Club DeVille for the Tracie Laymon-directed Up that featured everything from live bands and a silent auction (with autographed goods from donors such as Rick Linklater and Troma head Lloyd Kaufman) to roving masseurs and free food. Proceeds from the Up benefit will be used to fund the shooting of a short on a smaller format like DV, which will then be used as a demo reel to show prospective investors, a tact that more and more filmmakers seem to be trying.

"When it comes to benefits," Meister warned, "don't think low budget, because that will only get you a low take. There's so much free media in this town, too, and you can use that to your advantage, too. Some people just send out an e-mail chain to announce their benefit and think that's all they need. The smartest independent films that I've seen come out of Austin utilize a little bit of everything in a very grassroots way to raise funding. Bob Ray is a great example of that. There's a million Rock Operas out there that don't go anywhere, but Bob just pushed and pushed and made things happen by really utilizing all of his contacts. He's really my archetype of how to press forward in indie filmmaking."

Ray, for his part, says he's going for both the TFPF and one of the City Contracts for his new documentary on the Austin roller derby league. For his stoner epic Rock Opera, the punk rawk auteur lined up a handful of benefits featuring the bands that would eventually make up the Rock Opera soundtrack, though he says that "my advice to first-time filmmakers is to try to write something that is within their means to shoot if they intend on shooting it themselves. When I wrote Rock Opera I tailored the script to what my resources were at the time, which were minimal."

"Ultimately, making a movie takes years," says Candler. "That's especially if you're a writer/director, and financing it is only part of the process. You have to love what you're doing in order to even make it to the point where you're ready to go tackle financing issues and apply for grants. I mean, it takes forever. And that's probably the hardest part, especially if you're as impatient as I am, but obviously, it can be done."