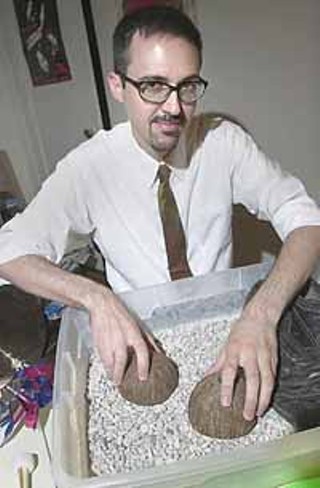 "I was looking for sound effects and I found a coconut in my refrigerator," says Buzz Moran, who retrofit an old kung fu movie with new, live sounds and dialogue. "It didn't sound like a real horse, but it did sound like every galloping horse in the movies." (Photo By John Anderson)

Striding, sword drawn, through a rosy landscape overlaid by dancing patterns of decades-old dust, burns, and scratches in celluloid, our middle-aged Chinese hero approaches the camera. Then he opens his mouth and, in perfect sync, utters a bemused "daaaamn!" in the voice of 32-year-old Texan Buzz Moran.

This is Buzz Moran's Kung Fu Masterpiece Theater, another entry in that burgeoning new genre of Alamo Drafthouse programs that combine screened films and live performance, often for the benefit of a lavishly soused audience. So far the most successful of said programs has been Mr. Sinus Theater 3000, a live movie-mocking (hosted by locals John Erler, Jerm Pollet, and Owen Egerton) whose blatant debt to Comedy Central's defunct Mystery Science Theater 3000 refuses to detract from its value as live, drunken, communal entertainment. But Buzz Moran takes the performance aspect of these programs even further, rescuing forgotten kung fu movies -- like Fearless Fighters, which screens for the third and final time this Tuesday, May 21 -- from the grimy mists of the Seventies and ambitiously retrofitting them with new dubbing, music, and radio-play sound effects, all performed live at the foot of the screen.

While the Kung Fu Masterpiece Theater's closest comparable antecedent may be Woody Allen's 1966 Japanese spy spoof What's Up, Tiger Lily?, Moran and company are actually doing something quite different here, deriving their humor not from overdubbed gags but from a combination of virtuosic foley work and a poker-faced reading of the films' original English dialogue, inscrutable translation quirks and all. And so, as the Golden Arm Trio's Graham Reynolds performs an original live score to the film, Moran and his fellow actors Shannon McCormick, Chad Nicols, and Chris Meister reverentially intone such awkward lines as "He won't escape, not after I blast him with my great undefeatable solar ray!" while simultaneously providing sound effects through such unlikely methods as leaping up and down in troughs of gravel, shaking huge sheets of galvanized metal, and banging coconut halves on a thin strip of wood.

Actually, the coconut halves part isn't really all that unlikely: "I was looking for sound effects and I found a coconut in my refrigerator," says Moran. "I cut it open, scooped out the meat, and, when I banged the halves on a piece of wood it sounded just like a galloping horse. Well, it didn't sound like a real horse, but it sounded like every galloping horse in the movies. In fact," Moran chuckles. "I swear that they must have used coconuts to make the original galloping horse noises in Fearless Fighters."

Much of the humor in Moran's Fearless Fighters comes from this subtle play between how things sound and how they sound "in the movies." Moran knows, for example, that an improbable pop! -- as a cork from a wine bottle -- will get a good laugh in the one instance a character removes an arrow from an arm, but that the film's most essential and common sound -- that of swords clashing -- must have some cinematic verisimilitude to make fight scenes genuinely exciting. Appropriately, finding the perfect sword sound was a long and careful process.

"We made several trips to Home Depot and found out that lots of things that you'd think would sound like a sword don't sound anything like it because they don't have that ringing sound. But then, by the time we got to the other side of the store we found these machetes. We started banging them together and they were perfect! But there was just no way we could stand there in the dark banging machetes together without somebody losing an eye. Also, with two machetes you can only make the sound of one hit. So we ended up getting this square steel bar and some metal stakes to hit it with and had a friend weld a stand on to the steel bar to make it sturdy. We could do the shhiiing! of the unsheathing, and we could deaden the hit -- chaak! -- when they stick them together." Moran added his new acquisitions to a collection of noisemakers first started during his formative years doing foley effects for the Salvage Vanguard Theater's radio-plays The Intergalactic Nemesis and The Return of the Intergalactic Nemesis, and the Rude Mechanicals' play Requiem for Tesla.

Their sound effects accouterments assembled, Moran and company began the most arduous part of preparing their version of Fearless Fighters: transcribing the entirety of the film's original dubbed dialogue into a typed script and then carefully matching their own live readings up with the movement of the screen actors' mouths. "That was really difficult, to try to memorize where their mouths are going to start moving," Moran says. With the assignment of roles (four male actors playing countless spoken parts) came another problem, as well: "You assign somebody this character and that character, and then you realize they have to fight each other. That happens several times in the film and there's no way around it: You have to fight yourself," notes Moran. "Sometimes the grunts and groans get a little mixed up."

The four had seen Fearless Fighters more than any other film in their lives by the time they'd memorized their warring parts and choreographed the sound effects. And then it was time to call in Reynolds, whose original score -- alternately subtle or hammy, as the film requires -- perfectly fit the group's gentle balance of respect and playfulness.

The careful work necessitated by such an essentially respectful approach to Fearless Fighters pays off, though, from the very moment the projector is switched on; in the first shot of a lone warrior brandishing a sword in a budding grove, the chirping birds, soft music, and light swooshes immediately pull the viewer in to the charming world Moran and his collaborators have revived in this battered old print. Rote fights become exciting, character relationships become involving, and nuances of plot even become -- gasp! -- comprehensible. Still, while their approach to the film is respectful, it's not necessarily reverent, and much of the ample humor in Moran's take on the film is derived from a slight, self-aware cheekiness that leads the four on occasional detours into light mockery (with members crinkling plastic bags whenever the print gets particularly scratchy), superimposed catch phrases (see the aforementioned "daaaamn!"), and jokes too good to resist (a character who, between shots, inexplicably goes from vigorously healthy to covered in blood is made to exclaim, before his demise, "What the heck happened?"). The group especially enjoyed matching up bit parts to outlandish and yet weirdly appropriate accents, ranging from placid Wisconsinite to crazed Texan to sinister German villain.

At times, though, the proceedings even take on an air of deliriously unhinged absurdity. One particularly long pitch-black reel change during an April screening (coincidentally occurring in the middle of a nighttime scene in a darkened bunker) gave the four an excuse to use the disembodied voices of their characters to lapse into an extended metaphysical bull session, the strangeness of which was capped by the sudden appearance of the Laser-Gun Horse, a character, improvised by Meister, who described himself to the audience as a key player whose work is entirely off-screen. At moments like these, the four evoke such icons of radio-play anarchy as the hallowed Firesign Theatre.

"I've heard little bits of the Firesign Theatre since I was really young, and their stuff is really brilliant," says Moran, but then he adds that he spent an even greater part of his formative years listening to The Goon Show, the 1960s British radio comedy featuring Peter Sellers, Spike Milligan, and Harry Secombe that is often described as a forerunner to Monty Python. "When I was in middle school, NPR was airing The Goon Show really late at night every week. I would somehow talk my parents into staying up until midnight and sit there with a little Radio Shack tape recorder that I would hold in front of the radio and tape all of these Goon Shows and listen to them over and over again. I would like to think that that old style of comedy is something that we're drawing from, much more than from some Steve Oedekerk thing."

On that count Moran has no reason to worry. His version of Fearless Fighters, though gently humorous, is worlds away from the cheap gags and crass opportunism of the CGI-warmed leftovers served up in Oedekerk's Kung Pow: Enter the Fist (which performed abysmally at the box office and, unfortunately, opened in theatres the same month as the first performance of Moran's Fearless Fighters). Moran's respect for the kung fu genre coupled with his love for the wholesome wonder, loopy sound effects, and corny gags of radio's Golden Age -- a love that even extends to the four's adopted wardrobe of matching white button-down shirts and black neckties -- invests his Kung Fu Masterpiece Theater with a droll charm and geeky exuberance, giving it a cross-generational appeal that its cousin Mr. Sinus lacks.

"People actually take their kids to these shows," says Moran, "and the kids love it. They don't really get the plot so much, but they love the action and the sound effects. And of course, they always want to know why, no matter where someone gets hit on their body, blood comes out of their mouth." The fact that children love his Kung Fu Masterpiece Theater seems to give considerable pleasure to Moran, whose childhood memories of midnight listens to The Goon Show broadcasts still seem warm and close and whose simple love for strange noises is demonstrably passionate. "I've always banged on a lot of things musically, always enjoyed playing things that weren't instruments. Somebody knocks against something and I'm likely to go 'Oh, wow!'" Now, Moran has the opportunity to make a packed theatre of viewers young and old go "Oh, wow!" with him.