The Vault Disney collection dusts off kid classics from its golden era of live-action films. They still fit -- and beautifully. 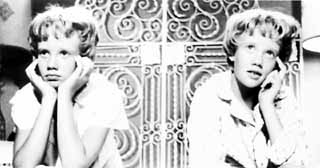 Hayley Mills and Hayley Mills starred in 1961's The Parent Trap, which Disney has released as part of its Vault Disney Collection of classic family films.
©MCMLXI Walt Disney Productions

The good ones we watched over and over. Lost ourselves completely to them, then holed up for hours scheming with our long-lost (imaginary) twin and drafting elaborate floor plans for our own house in the trees. The good ones provided a leaping-off point for the imagination, and, if they were really good, we could see ourselves in every frame, hanging in the background -- the fourth Robinson child, swinging from tree limbs, Old Yeller's other best friend, the one who would have never, well, you know ...

That's why it's a little scary to revisit the films that fed our childhood fantasies. Would they feel dated? Would they melt into corniness, or something kitschy? Or, worse yet, would they somehow feel less real?

Nah. Not if they're good. And hats off to Disney for making sure the first releases from their Vault Disney Collection were really good. Four films -- never before released on DVD, ahem -- that marked the golden age of Disney's live-action family pictures. Four films that got the imagination leaping.

Anything less than a full restoration and a cache of bonuses would be an ugly stepsister in the competitive world of DVD releases, and Disney pulls out all the stops with its Vault Collection. Each film is indeed restored beautifully. The unsullied island on which the Robinson Family settles is ravishing. Pollyanna's pleats are neatly starched and gleaming. The coat on that "mongrel" Old Yeller never looked so yeller. And, worth noting in this day of retroactively "tweaking" the classics (Star Wars and E.T. spring to mind), Disney has the good sense to keep its mouse mitts off the Vault releases. When The Parent Trap's Maureen O'Hara and Hayley Mills casually stroll through a Boston park ... er, soundstage in California, it still looks like the awkward pitter-patter-in-place-in-front-of-a-blue screen that it really is. And so much the better for it -- what's the point of an imagination if we can't fill in a few blanks? (Trap director David Swift, on the other hand, isn't so gracious; on the audio commentary he very nearly moans at the scene's clumsiness: "I can't bear it!")

As per usual, commentaries accompany each of the films; fortunately, enough of the original casts are still around to provide insight ... well, mostly insight. Audio commentaries are inherently a hit-or-miss endeavor. Swift and star Mills' commentary for The Parent Trap is mostly a lot of them giggling at the sight gags (can you blame them?), interspersed with Swift's constant laments about what he did wrong. But if you can wade through, there are the occasional gems, like Mills recalling the scene in which the back of her dress was cut away -- a scene so embarrassing for the young actress that she wore some 10 pairs of underpants. The result onscreen? As Mills mocks, "my bum looks sort of upholstered."

Because the Disney live-action films of the Fifties and Sixties were governed not so much by the casting couch but a revolving door, familiar faces pop up in each film, some wandering over to a special feature on another disc to put in a good word for Hayley or Uncle Walt. Mills -- Disney's midcentury bid for the Shirley Temple award for matching cuteness with cunning -- is rightfully a frequent contributor. She's the subject of a short documentary over on The Parent Trap disc, and there she is on the Swiss Family Robinson disc, narrating never-before-seen footage of Hayley, Uncle Walt, and dad Sir John Mills (that's Father Robinson to you), ambling through the just-opened Robinson Tree House at Disneyland.

Each film comes with an entire second disc devoted to similar archival footage, as well as cast biographies and conversations with ubiquitous child stars Kevin Corcoran and Tommy Kirk (co-stars in Old Yeller and Swiss Family Robinson, as well as lesser Disney classics like The Shaggy Dog). There's also some pretty nifty semi-educational tools: A Swiss Family feature allows viewers to watch the animal race sequence with three different audio track options -- dialogue, sound FX and score, and combined -- so all that postproduction trickery can be better understood. True, some of the features have a way of demystifying the magic -- like the unmasking of Hayley Mills' unbilled Parent Trap body double Susan Schutte (no, the film didn't really just star Hayley Mills and Hayley Mills, as the credits insist so cheekily). Although kids still enmeshed in the fantasy might balk at knowing the tricks of the trade, their grownup versions should appreciate that much more lore. Of course, there's also the requisite Disney promotionals, like the Old Yeller featurette called Dogs! That's just a greatest-hits reel of every other Disney dog -- from Lady and her tramp to Benji and Air Bud -- that's simultaneously shameless and delightful.

If there is an ugly stepsister, it's the VHS versions of the Disney Vault Collection -- a sad fact in a world run over with souped-up DVDs and their threadbare tape counterparts. Still -- and god bless Uncle Walt's equal opportunism -- the VHS version does offer a classic animated short prior to each film. (The DVD does as well.) But what it all comes down to, really, are the films themselves, not the snazzy packaging or bonus tidbits. With or without, the films themselves will be watched over and over. And, if we look very closely, we'll see ourselves hanging in the background, on the edge of the frame. We may be unbilled, too, but we're there, swinging from tree limbs, hugging that gorgeous yeller mongrel.