A Grouse With the Mouse

How Disney made a lesser Duck out of Howard 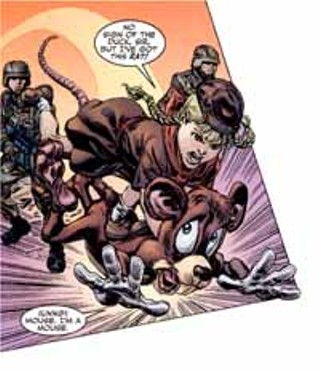 Why is a character called Howard the Duck not a duck at all? The answer is simple when you think back to the classic battles of the funny animal kingdom, be it Daffy vs. Bugs or Donald vs. Mickey. The duck will tell you the same story every time: It's all the rodent's fault. To expound a bit, does anybody remember Air Pirates Funnies? Probably not. That's because Air Pirates Funnies was an underground comic book in the Seventies that starred a character by the name of Mickey Mouse -- yes, that one! -- and it took little time for the Walt Disney Company to take issue with the comic's portrayal of their li'l furry rascal as a drug-taking, sex-addicted adventurer. The Empire won their case easily, eliminating Air Pirates from the racks and punishing its creators.

A few years later, along came Howard the Duck. Created as an afterthought in an issue of a comic about a shambling swamp creature called the Man-Thing, the stogie-smoking canard soon proved himself an irascible, beloved character and a delightfully "adult" addition to Marvel Comics' traditional superhero fare. An everyman (or everyduck) trapped in our world as a minority of one, he was writer/creator Steve Gerber's ticket to send up anything ridiculous about our world, which would have to be everything -- it's run by a bunch of hairless apes, after all!

When Disney saw a cartoon duck, they immediately recalled a previous cartoon mouse that had raised their ire and threatened to sue. Even in the Seventies, Marvel was hardly a bunch of hippies printing up dirty counterculture comics, but they were still helpless before the might of Disney. Negotiations between the two companies began in 1977, just after Howard's high-profile presidential campaign as a candidate for the fictional All-Night Party. It wasn't a good year for Howard -- he lost the election, his backers at Marvel didn't even put up a fight for him against Disney, and worst of all, Gerber split from the company over the issue of creators' rights.

That left Marvel with the duck's body, Gerber with Howard's soul. Occasional attempts to keep the duck alive without Gerber were unsuccessful, and a horrendous feature film (using a new Disney-approved look for HtD) made in the Eighties was the final feather. Calling Marvel's decision "unbelievably stupid," Gerber recently said "Over the past couple of decades, I've done a lot of complaining about the idiocy of Marvel's old management, and if ever there was proof of my argument, this is it. They literally let another company redesign their own character for them. I can just picture the Disney artists, hunched over their drawing boards, cackling like hyenas, as they designed the ugliest duck they could possibly imagine. Disney's lawyers and management must have had a real belly laugh, too, when Marvel accepted their design without balking."

Why did Gerber even dredge up the matter? Because 25 years later, Steve and Howard have reunited, and new issues of Howard the Duck have begun appearing after a quarter-century gap. The only problem is that Gerber refuses to even consider working with the hideous "approved" designs for his character. Though the title of the book clearly says "Duck," the current Howard has been mostly drawn as -- you guessed it -- a mouse.