The Sights and Sounds of Art in Sync Cecil Taylor dances -- he crouches, hops forward on all fours, and then rises and urgently expels air from his pursed lips. Cecil Taylor recites poetry -- a riot of three- and four-syllable words, both sublime and ridiculous, crammed uneasily together and clamoring for space. And then, when Ron Mann's film Imagine the Sound finally shows Taylor doing what he's best-known for -- playing the piano -- those eccentric contortions and chaotic verbiage miraculously surface again in his music. Taylor's explosive piano phrases declaim meaningfully, leap playfully, and weave dense patterns of tone and color. Consonant with Taylor's philosophy -- stated repeatedly in Imagine the Sound -- that music should encompass other arts such as dance, poetry, and painting, Taylor becomes at the piano bench a dancer, a poet, a painter, even -- this being cinema -- some kind of avant-garde avatar of Chico Marx, playfully batting the piano, jabbing it, recoiling from it in horror, and then embracing it again with redoubled passion. 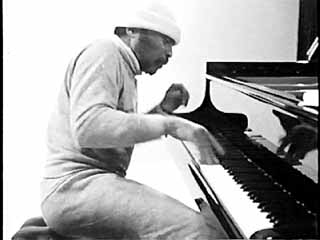 It is this visionary insistence on the unity of music and all other arts that makes Mann's cinematic portrait of Taylor and some of his 1981 free-jazz contemporaries a particularly apt screening choice for the Austin Eye+Ear benefit at the Texas Union Theatre on May 5. Established in 1999 as a sidebar to Austin's annual Cinematexas International Short Film Festival, with co-sponsorship by avant-garde music boosters Epistrophy Arts, Austin Eye+Ear is committed to exploring the intersection of avant-garde music and avant-garde film. Past guests at their multimedia performance series (which runs this year Sept. 17-22) include such luminaries as Ken Vandermark, Jim O'Rourke, CCMC, Mouse on Mars lead man Jan St. Werner, noise titan Merzbow, and Sonic Youth guitarist Thurston Moore.

This year, Eye+Ear boasts the premieres of two originally commissioned pieces, one by composer Gerald Pape and the other by multimedia performer Miranda July. Both works are dedicated to the memory of legendary composer Iannis Xenakis. Pape is the current director of CCMIX, a Paris-based studio for compositional research founded by Xenakis, and his piece will be performed by London's Arditti Quartet, which has worked personally with Xenakis, Karlheinz Stockhausen, and John Cage. July, a Kill Rock Stars recording artist and MoMA-screened filmmaker who established the Joanie 4 Jackie (formerly Big Miss Moviola) alternative distribution network for women filmmakers, has performed her multimedia work The Swan Tool twice at Eye+Ear. Also appearing at the sidebar will be guitarist Derek Bailey, who, during the course of a career encompassing more than five decades, has both worked with most of free improvisation's best players and witnessed the birth of free jazz.

Appropriately, that latter movement is captured in Imagine the Sound in full flower, decades after its birth, with musicians like Cecil Taylor, Paul Bley, Bill Dixon, and Archie Shepp still conscientiously working to expand the borders of the territory carved by its pioneers. Even while the four men bemoan the fact that such a film wasn't made earlier -- in the heyday of Coltrane and Coleman -- they each concede that both support for free jazz and the unique voices of its practitioners are stronger than ever.

Aside from documenting the free jazz scene's vitality, though, perhaps the film's most fascinating quality is its vivid evocation of the intersection between personality and musical technique, in the process putting a human face on a musical style that may seem cold and academic to many listeners. In filming these musicians, Mann pays especially sensitive attention to comparing their personalities, speech, and gestures with their playing. Taylor wears the same thoughtful, self-consumed facial expression choosing notes as he does choosing words. By contrast, the cantankerous Dixon brassily mouths off, but then gets behind a trumpet and plays pinched, tentative phrases. Bley -- all arrogant proclamations in conversation -- sits down at the piano to play pieces of surprising tenderness and lyrical beauty. The stoic Shepp holds forth bemusedly in interviews and then, in performance, bellows a fiery incantation to Malcolm X. And just as, in moments showing Shepp's poem and Taylor's dance, the film dwells continually on the other artistic and political acts of its musicians, DP Robert Fresco shoots their music-making in a manner that is itself subtly musical. The film's gentle sense of visual music is most apparent in rhyming sequences that, dwelling lovingly on the details of their opened pianos, dually depict Taylor alone against a field of white and Bley alone against a field of black. Isolated against these stark backgrounds, both musicians offer up amazing displays of musical virtuosity and physical stamina working together in service of a complete faith in intuition, displays that Mann and Fresco shoot straight and almost incredulously. It is their similar faith -- one in film, music, and the simple power of synchronized sound -- that makes Imagine the Sound such a pleasure for the eyes and ears.