Better Git Hit in Your Soul 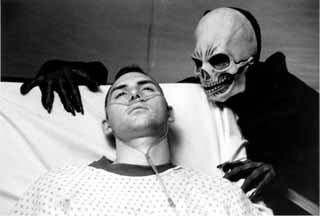 Mercifully placed right at the start of George Ratliff's Hell House is a church spokesman's answer to a question that, if unanswered, would otherwise hover over the entire film: Why are evangelicals, like the Pentecostal Church, so hell-bent (sorry) on saving us? "We believe it's the responsibility of the church to warn our culture of the coming danger ... If [we] don't do that, the blood of your sins is not only on your hands, it's on [ours], too."

That taken care of, we're ready to be strapped in for a tour of the Trinity Assembly of God's 10th annual Halloween Hell House: a haunted house where a $7 admission buys you a Dantesque preview of where a life of sin -- their definition -- will lead you. It's not pretty. And you probably won't be surprised to learn that, unlike your garden-variety secular haunted house, this house of horrors has a redemption room where those who've seen the error of their ways can cut their losses and do something about it.

The Trinity Church, in Cedar Hill outside of Dallas, started Hell House in 1990. It's a major production, replete with hundreds of actors, truckloads of lights and full audio-visual tech crews, and tour guides dressed as demons who take groups of young people from room to room to view depictions of school massacres, AIDS deaths, fatal drunk driving crashes, and botched abortions. All the while, demons goad the gullible into sin. In the end, the groups are taken to a simulated "hell" to watch the sinners burn and suffer as they beg others not to make the same mistakes they made.

Former Austinite (and current New Yorker) Ratliff, who made Plutonium Circus (1995) about the nuclear power plant in his hometown of Amarillo, became interested in the Cedar Hill church's Hell House when the 1999 Halloween event made national news because it included re-enactments of the then-recent Columbine shootings. "I made a few calls and the next day flew in -- on my own dime -- with my video camera to shoot the Hell House event," Ratliff explained. The rest of the national press swooped in for the Columbine part of the story and then went home. But as far as Ratliff was concerned, they'd missed the real story, which was about this church community. The Pentecostal church (of which the Assembly of God is an off-shoot) is the fastest growing Christian sect in the world.

A few days later he had a 15-minute rough cut to show to Mixed Greens, the New York company that would subsequently produce Hell House, the movie. That following August, he was shooting his feature on 16mm film, both because he thought that film, rather than video, would produce the vérité look he wanted and because "the film had a lot of black in it and I hate the way black looks on video." Ratliff's Hell House opened last September at the Toronto Film Festival and played most recently at the 2002 South by Southwest Film Festival.

The film follows the Trinity Church's months-long preparation for the event, with detours into the backstories and lives of a few church members and interviews with those heavily involved in the production, including the teen actors who attended the church's school. By film's end, a picture emerges of what fuels the engines of religious groups like the Pentecostals, and how they offset culture-sheltering mind control and fear with community support and love to keep their youth -- those typically at the highest risk of yielding to worldly temptations -- from breaking ranks.

Austin Chronicle: What were some of the challenges in shooting this film?

George Ratliff: I wanted to make an old-school vérité-style documentary, where the event just happened in front of us. The main obstacle with that is getting people completely at ease and used to your being there and just acting normal, which was a little bit easier because they were all performing anyway. So I came down early to be this outside presence, so that everybody knew who I was -- the guy making the documentary. Everyone knew not to talk to me about spirituality because I was the guy making the documentary. That was the one thing that I didn't want that to be part of the deal.

AC: Oh, so you were worried about them trying to convert you?

GR: Well, yeah. When they dedicate huge chunks of their lives to doing that, why would they hold back on me? I stipulated that I was there to make a documentary, so it was not about me and where I stood, and they agreed to that. They were very open -- they let me go anywhere we wanted. They were very trusting. They gave us full access.

AC: John Cassar, the single father of four kids -- from 3 to 14 years old -- in whose home you shot that amazing morning sequence, where he fixes breakfast for and gets all four kids off to their various destinations, even with the cerebral-palsied toddler having a seizure in the middle of it -- what did he represent to you?

GR: His backstory is interesting. By the way, we had no idea that on the morning we'd be filming at his home, that one of the 3-year-old twins would have a seizure.

One of the obstacles of making a documentary is finding a character that you empathize with and are invested in for an entire feature. There's a great story behind the Hell House production itself -- you know, here's what they do -- but that only lasts around 20 minutes. You have to find a story that all kinds of people, not just those with a church background, can relate to and be empathetic to.

Cassar had a real story -- he was Catholic when I first met him, his oldest daughter just happened to go to the Trinity Church school, and he worked on Hell House. And then his wife had an affair with someone she'd met on the Internet, and there was trouble with the law and things got really messy. The Catholic Church, as he said, didn't return his phone calls. The Trinity Church was there for him in a big way. So he represents why these people need this church and this community and why they'd be doing this and why they believe so much in it. And you have empathy for this church and this community when you see him. He needed support and community, and he wasn't getting it anywhere else. And also, it's built into their theology that they have an answer for everything -- it may seem silly -- but they have an answer for everything.

AC: What did you come away thinking of the Pentecostals after shooting this film?

GR: The whole experience was very trying, but I walked away thinking they were all remarkably nice people. Of course I don't agree with their methods or what they're doing, but I never disliked anyone there, and I thought they were all good people. Going into it I thought I'd find more oddballs -- with the speaking in tongues, and all that.

Hell House will be presented as part of the Texas Documentary Tour on Wednesday, May 8, 7:30pm, at Dobie Theatre (2021 Guadalupe in the Dobie Mall). Filmmaker George Ratliff will introduce the film and conduct a Q&A session following the screening. Advance tickets are available for Austin Film Society members only by calling 322-0145. Tickets will go on sale at 6:15pm on the day of the show. Admission prices are $6 per show for the general public; $4 for Austin Film Society and KLRU members and students. The Texas Documentary Tour is a co-presentation of The Austin Film Society, The Austin Chronicle, SXSW Film Festival, The Hotel San José, KLRU TV, and the University of Texas Department of Radio, Television, and Film. Hell House opens for an exclusive run at Dobie Theatre on May 10.