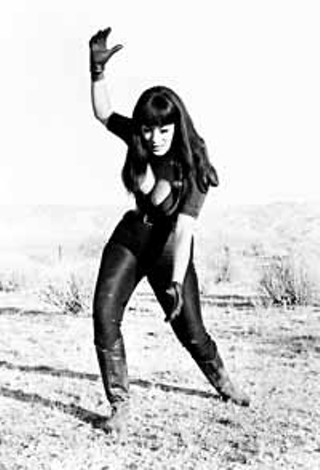 In the mid-Sixties, Russ Meyer's seminal exploitation flick Faster, Pussycat! Kill! Kill! hit the screens with a combination of high melodrama, high-octane editing, hot-rod camera work, and a trio of impossibly voluptuous women looking to kick ass and take names. Stripper Tura Satana played the venomous Varla, ringleader of the group, decked out in black gloves, black boots, and black leather jacket. With a résumé that already included a stint dancing in one of Jack Ruby's Dallas nightclubs, she took to her femme fatale role with a vengeance.

On Saturday, May 4, Satana will be in attendance at the Alamo Drafthouse's first annual Alamo Drive-In at Longhorn Speedway, a mom & pop racetrack just south of Austin. The event will include a double feature of FPKK and H.G. Lewis' femme-biker saga She-Devils on Wheels, with live music in between features and the in-person antics of Satana and her FPKK cohorts Lori Williams and Haji. Satana will be flying in from Nevada, where she now lives after years of running a security business and, later, a hot rod shop with her late husband. Last year I was able to meet her at Atlanta's Drive-Invasion (the inspiration for the Alamo's event) and found that, unlike the vitriolic Varla, she's actually quite approachable. We talked a bit about her days with Russ Meyer and the moves Elvis picked up from her.

The Austin Chronicle: Let me just start out by asking you about your days as a dancer. Didn't you get a pretty early start?

AC: And that was in what kind of places?

TS: Let's see, I originally started dancing in Chicago in certain nightclubs where they had talent shows and the like, then I went to the West Coast and was dancing in places like the Tropicana and a couple other small clubs. From there I went back to Chicago, joined the union, and started in Calumet City, Ill., at the Rendezvous Club. Went to New Orleans, from New Orleans went on up until I became one of the 10 best-known [strippers]!

TS: [laughs] Calumet City? Yeah, you can't get any lower than that. ... It was like the cesspool of the United States.

AC: Russ Meyer saw you when you were dancing?

TS: No, I don't remember how Russ saw me, actually. All I know is that at the time he called me ... I was doing [Billy Wilder's] Irma la Douce. I went to meet Russ when I was still in costume, and he said that he'd like to have me read. ... I asked him how he wanted Varla and he just said, "Well, however you think she should be." Well, I did and he just said, "Yes, you're definitely Varla." And that's how I got the job.

AC: It looks like you were having such a good time making Faster, Pussycat. Were you?

TS: Oh yeah, we all had a ball there, although he and I had a little conflict of personalities. Russ is very good about letting you do what he wants first, then giving you a chance as the actor to try it your way; he was very good with that. Sometimes, though, he was very persistent about wanting something done a certain way.

I remember one time when we just had a flat-out argument about it and I turned around and punched a wall of railroad ties and broke my hand! But that was about the only thing where we had a bad conflict, and the rest of it was pretty good.

AC: I know that Faster, Pussycat was shot on location, and it had to be about 300 degrees out there. Were there any problems that went along with that?

TS: [flippant] Oh yeah, we all got sunburned ... No, we were in the Mojave Desert near Edwards Air Force Base and the town of Mojave, and Johannesburg, Randsburg, and it was usually about 120 degrees in the shade. It was difficult to work under those conditions, especially when we were shooting in the dry salt beds and the sun kept reflecting up off that. It was difficult, but we all put up with it.

AC: Did you ever have any idea that the film would have the legs that it did?

TS: No. No, I had no idea at the time that it would have the popularity that it did. When it came out, it was a box office failure; at least that's what Russ said. At the premiere, though, Russ, Haji, and I were all sitting in this one row and there were these two guys sitting behind us. I kept listening to the comments this one guy kept making to his buddy, like "Oh, I can whip her," or "That's all fake, they didn't really do that," or "I'll bet I could make her say uncle."

So when the lights came up and the guy announced we were in the audience, the spotlight came to us and we stood up. I turned around to the guy and said, "Well, honey, if you think you can whip my ass, then let's go." The guy slunk down in his seat and crawled under everybody's legs to get out, and I don't know what happened to him after that! But his buddy was getting a good laugh!

But everybody loved it in the audience, you could hear the comments. Especially the guys in the audience who were either really macho or saying "God, I wish she would do that to me," while the women are all thinking "Boy, would I love to be able to do that to you!"

AC: I think one of the Russ Meyer style elements that was really established with the film was his editing work and pacing.

TS: Not just the editing, but the camera work; he'd shoot the same scene from six or seven different camera angles. You could see, though, he'd do the editing because he knew exactly what he wanted, and it works. And the pacing, there's no place in that movie where it drags.

AC: Tell me a little about you and Elvis.

TS: Well, Elvis and I met in the Fifties, when I was working in Cincinnati; I met him when I'd gone over to Kentucky to see his show. He came over and caught my show, and liked the moves and acrobatics I did in my routine and asked me where I learned them. I said, "Well, a lot of them I learned with my father when we were studying karate or aikido," and he said, "Can you teach me?" and that's when we started going out.

I started teaching him some of my moves, and he started using them in his routine. He was one of the loneliest people, except for his mom; she was one of the sweetest ladies you'd ever want to meet. He was a very down-to-earth guy, and he didn't put on airs until he got a little older.

I always got a kick out of what he did with Priscilla and how for a while there she looked like a carbon copy of me, with her hair and eye make-up, and I often wondered about that.

AC: I know you were quite close.

TS: Oh yeah. He even asked me to marry him once, and I said that we both had our own careers and that I wasn't going to be the person where you could say, "Hey, I quit doing this because of you." You're gonna do what you have to do and I'm gonna do what I'm gonna do, and after that we kind of lost touch.

The Alamo Drafthouse Cinema and Rollingroadshow.com present the first annual Alamo Drive-In on Saturday, May 5, at 5pm, with FPKK co-stars Tura Satana, Haji, and Lori Williams in attendance. The event takes place at Longhorn Speedway, approximately five miles outside of Austin (Hwy. 183 S. at the intersection of FM 812). Tickets may be purchased at www.drafthouse.com.