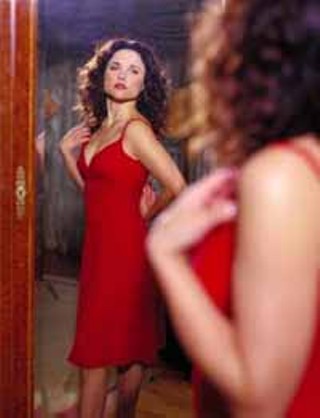 I've been a longtime fan of Louis-Dreyfus. I liked her on Seinfeld. I liked her on Saturday Night Live before that. But it's a treat to see her in her own series created by husband Brad Hall (another SNL alum). Watching Ellie is a slice-of-life sitcom about L.A. chanteuse Ellie Riggs (Louis-Dreyfus) and her small universe of friends. Interestingly, all the key people in her life are men, except for real-life sister Lauren Bowles (Ghost World) who plays her sister Susan on the show. Like her contemporaries on Sex and the City, Leap of Faith, and other single-woman-in-the-big-city shows, Ellie's got man trouble. The peculiar super of her building, Ingvar (Peter Stormare, Fargo), is obsessed with her. Edgar, her boob of an ex (Steven Carell, The Daily Show), can't quite let go, and her current lover, Ben (Darren Boyd), is married. There's also the frenetic but sweet Dr. Zimmerman (Don Lake) who lives in Ellie's building. He's her biggest fan and always eager to help when she needs medicine to fight a sore throat or ease a migraine. So what if he's a veterinarian?

The show's gimmick, which is both an asset and a drawback, is that it's shown in "real time," with only one commercial break in the middle. In this way, it emulates the tempo of cable series, which unfold in a more relaxed pace. However, as if to remind us dimwitted viewers that we're not just watching another network sitcom, a timer starts the show then moves to the lower left corner of the screen. The gimmick is used much more effectively in Fox's 24, in which the effort to stop an event before it's too late is an integral part of the show. Not the case in Watching Ellie, where time is less a factor than the small events that happen during that time.

On one level, Ellie is like TV's other single women: sexy, opinionated, smart, and a snappy dresser. However, unlike her peers on Sex and the City, for example, she is not constantly on the prowl for men. In fact, the men in Watching Ellie need her much more than she needs them, including her lover, whose wife treats him like a nuisance when she can be bothered to deal with him at all.

Interestingly, there is almost a lack of self-consciousness in having Ellie involved with a married man. From soap operas to miniseries (The Thorn Birds) to regular series television (Hill Street Blues), women involved in extramarital affairs are either treated as stalkers, Hester Prynnes, or fragile damsels crying into their pillows. Ellie is all and none of these women. Instead, the consequences of being involved with a married man are played for its folly -- sometimes painful, sometimes humorous.

Which brings us to another strangely overlooked element of the show. Louis-Dreyfus sings! From all indications, it really is her voice and she sings beautifully. Unlike other shows that use music as background or interludes (the Bette Midler show on CBS), the jazz standards typically used often play an integral part in revealing Ellie's heart or punctuating the theme of the episode. It's a clever device given how much music can reveal in a compressed amount of time.

Watching Ellie is a deceptively stylish 22-minute meditation on being a single woman. But Ellie is not the bright-eyed single gal of TV's past, nor the sassy sexually driven woman of the present. In Ellie, we have a heroine who is flawed but sympathetic. She's the girlfriend you scold for getting involved with the wrong man, but is there for you when you make the same, stupid mistake. She doesn't wag her finger in your face -- at least not for long.

The last episode of Watching Ellie before it goes on hiatus airs April 16, 7:30pm, on NBC.

Anyone following the current ratings war between the various TV news programs knows that it's been an ugly affair. The public courtship of David Letterman by ABC to take over Ted Koppel's Nightline slot ended with Letterman staying at the eye, and Koppel looking like the cousin taken to the prom because no one else would have him.

On the cable news networks, the body count is higher. More news staff were recently cut at CNN, while it continues its ratings cockfight with the Fox News Network, as the ratings-anemic MSNBC limps along the sidelines looking to get in the game -- but not for long.

This summer, Phil Donahue comes out of retirement to host a news-talk program at MSNBC. The Emmy Award-winning Donahue is known for his left-of-center views, yet his approach to issues and guests is fair, comprehensive, and earnest.

Donahue will face off against the Fox News Net's The O'Reilly Factor hosted by Bill O'Reilly and CNN's upcoming Connie Chung show. Watch for a June launch.