The Weakness of the Flesh 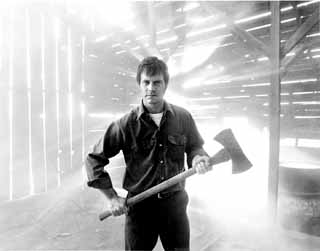 Texas native Bill Paxton has established himself as one of Hollywood's best middle-ground actors, which is to say that he's not quite a household name; he instead falls some place between the "I know that face from somewhere" camp and the golden fields of leading man-dom. Not that he's all that concerned. Paxton headed out to California from his hometown of Fort Worth in the mid-Seventies with the idea of working behind the camera, but, in-between work as a set dresser on various low-budget ventures, early acting gigs in films as varied as Stripes and The Lords of Discipline led him down another road entirely.

A solid character actor with charm to spare, to this day Paxton's probably best known as Alien's doomed Pvt. Hudson ("Game over, man! Game over!"), but more recent roles in Twister, Apollo 13, and longtime friend James Cameron's behemoth Titanic have made him a bankable commodity to fickle studio heads.

So what's an almost-leading man to do when his career's on the upswing? Why, get behind a camera, of course. Paxton's directorial debut Frailty is hardly a vanity project, though; it's a Texas gothic tour de force that focuses on a father of two young boys who believes he's been charged by God to slay the demons that walk the streets of his rural community. Trouble is, all those demons look just like ordinary people.

Grim by anyone's standards, Frailty is as atypical a debut as they come, as lucid as a waking nightmare and nearly as hard to shake, chock-full of memorable performances (and Texans) and one particularly stunning turn from a character named "Otis."

Austin Chronicle: You started off as a set dresser for Roger Corman, and I was curious if any of his legendary parsimony carried over into your directorial debut?

Bill Paxton: I've got a little bit of a producer's heart, and I've always had a great appreciation for efficiency on a film shoot, trying to find ways to economize while maximizing what's up on the screen. And [working for Corman] certainly was the school for that.

I met Jim Cameron on a Corman film in 1980 that Jim was art directing called Galaxy of Terror. I don't think Jim and I ever even saw the movie -- when we were working on it, it was called The Quest. And just the way we put those sets together and the bang that we were able to get for the buck in terms of getting the stuff on the screen and the creative freedom that we had was remarkable. Corman was in those days the first guy to exploit new talent coming into town. He made non-union features but, hey, it was a great playground for a lot of us. He worked us hard and didn't pay us much but, God, it was a real opportunity to learn. But we didn't earn.

AC: Frailty struck me as an interesting -- even odd -- film to choose for your directorial debut. It's not often that a first-time director who's also as well-known as you are as an actor picks a religious serial killer flick right out of the gate. And it's just a terrifically dark story.

BP: I've always liked my horror neat, you know? I remember the classic horror films that I grew up watching on television and that my dad would take me and my older brother to see at the theatre. I remember the first time I saw Psycho, and there were a lot of movies where the children were put in danger and a lot of the horror was derived from the emotional investment in the kids. Even movies like the original Invaders From Mars, where you have this kid running around trying to get an authority figure and an adult to listen to him and they all turn out to be aliens. And of course what was so creepy about that movie was that at the end you find out it was all a dream and you say, oh, thank God, and then you find out it was a precognitory dream!

AC: Watching Frailty, I kept thinking you just had to be a big fan of Night of the Hunter, yes?

BP: This movie has a lot of roots in Night of the Hunter, and that's no accident -- that was screenwriter Brent Hanley's favorite film growing up. I knew the film pretty well, but I had never seen it projected in a theatre. I was in Amsterdam in the last few months making a WWII drama, and because Europeans have such a great love of classic films I got a chance to see it playing at a film museum there. I went two nights in a row, and it was one of the great cinematic experiences of my life. And of course it was the only film that Charles Laughton ever directed, which is a real crime.

AC: You're originally from Fort Worth, and Frailty, which is set in Texas, has several other Texans in it. Is that something you consciously went after or did it just happen?

BP: I really wanted it to have an authentic sound to it. I had met Matthew [McConaughey] on U-571, and this role was just tailor-made for him. Once I had Matthew cast, I went straight to Powers Boothe to play the Texas FBI agent; I had met him on Tombstone, and he had always been one of my favorite actors and someone that I really respected. Luke Askew, too, is another great regional actor from a lot of movies from the Seventies, and who was in my film Traveller [which Paxton produced and starred in].

AC: How did you come up with the idea to put the name "Otis" on the axe? That's such a disturbing touch.

BP: There were two reasons for that, actually, the first being that it was really a character in the film, you know, [the serial killer] meets it in the barn with the light from the heavens shining on it, and I really wanted to anthropomorphize it. The other reason was that, when, at the climax, this certain character reaches for it, I wanted the audience to immediately realize that this was the same axe. It's kind of hard to talk about this without giving things away, but that's why. Otis is the holy weapon that's passed down in the movie.

BP: [laughing] A home companion, if you will.

AC: How did you come to choose Bill Butler [Jaws, The Conversation, Grease] to do the cinematography on this film? It's got a really creepy look to it.

BP: I can't say enough good things about his work on this film. He got to do a very stylized sort of lensing, but we got him through David Blocker, who's both my line producer on this and Traveller. They had worked together on a previous picture, and when I was meeting cinematographers, David suggested I meet with him, and immediately I knew I was going to enjoy talking to the guy just because of all the great pictures he had been involved in. I knew I wanted the film to look like an old Hollywood studio-crafted film, and I wanted to shoot the movie in a very simple way, but with a great look. What inspired me to come out to California when I was 18 were really the films of the late Sixties and early Seventies like The Last Picture Show, a lot of Scorsese's work, Coppola's work, stuff like Hal Ashby's Harold and Maude. These films were pushing the envelope in terms of the stories, the characters, all of that, but these filmmakers had a great love of the craft of motion pictures, and they had grown up in a golden age of the studio films. I wanted my first movie to have some great craft in all of the departments, and cinematically speaking I knew that Bill Butler could do that.

AC: Debut films can be tough. Was Frailty a good experience for you, all things considered? And do you plan on directing again?

BP: Not only am I planning on it, but I've already got a couple of things in the hopper. I just don't know if they're going to pop. It's a miracle any movie gets made at all, and Frailty was no different. But, yeah, I'd like to direct again. I'd like to direct sooner rather than later.