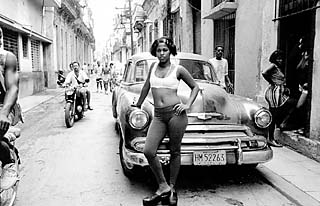 As Havana's oldest Afro-Cuban music venue, La Tropical is like New York City's Broadway: If musicians can make it there, they can make it anywhere. David Turnley's documentary of the music hall, La Tropical, reveals how race defines Cuban music in ways that are both affirming and damning. (ADD, 7pm) Screening afterward is 25 Watts, a Uruguayan take on three slackers that won the Tiger Award from the Rotterdam Film Festival and Best First Feature Film at the Havana Film Festival. (ADD, 9:30pm)

Coming Back Home: Stories From Vanished Times and Places

This documentary program features two films that examine immigrants' troubled relationships with their left-behind homelands. In the short film "The Apple Is Delicious," a filmmaker tries to understand why his Colombian mother discouraged him from speaking Spanish in public. La Palabra Desenterrada (Haunted Land) tracks a Mayan Indian and a Guatemalan photographer as they return to the site of a massacred village. (MYEC, 4pm)

An exceptional film by Swedish filmmakers Erik Gandini and Tarik Saleh, Sacrificio (Sacrifice) uncovers the untold story of the man blamed for the death of Bolivian revolutionary Che Guevara. Ciro Bustos has lived in silence since the day in 1967 when Che was assassinated, thereby ending the dream of a united Latin America. It also marked the beginning of branding Bustos a traitor to the cause. As the filmmakers urge Bustos to tell his side of the story, and as details of Che's life and death long taken as fact are shown to be to faulty, the larger question of who or what determines how truth and history are made become startlingly clear. Sacrificio is preceded by the award-winning short documentary "Los Zapatos de Zapata" ("Zapata's Path"), in which myth and reality come together to create a new portrait of Mexican revolutionary, Emiliano Zapata. (ADD, 7pm)

Screening later in the evening is Ivan Acostas' documentary, How to Create a Rumba. Chico O'Farrill, Juan Pablo Torres, Horacio "El Negro" Mendez, Malena Burke, and a host of other musicians discuss the roots of Cuban rhythms from the mambo, the bolero, cha-cha-cha, the abakua (or salsa), and of course, the rumba. (ADD, 9:30pm)

Gay Latinos in the U.S.

Previously screened by aGLIFF in January, De Colores is a multilayered discussion on how religion, family and parental expectations, homophobia, and sexism (i.e., "machismo") impact coming out for Latinos. The film is preceded by the short fiction film, "Everything in Between." (TEX, 7pm)

Two documentaries explore countries struggling for a modern identity. Indigent Brazilians search for dignity in "Strong Roots," about the Landless Workers Movement, while "Chasing Paradise" examines the paradox of Jamaica as a tropical paradise in the face of extreme poverty. (TEX, 9:30pm)

Indigenous Film in Mexico The Chiapan town of San Pedro Chanalhó struggles to keep the peace between the PRI (ruling political party) and the Zapatistas in Chenalhó, el Corazon de los Altos (Chenalhó, Heart of the Highlands). It's followed by another documentary, Voces de la Sierra Tarahumara (Voices of the Tarahumara). Trapped between the "progress" of NAFTA, a World Bank Forestry project that is tearing down the oldest forests in the Sierra Madres, and drug traffickers that promise death if cooperation is not offered, a group of indigenous leaders decide to take action. (TEX, 7pm)

Strange Love and the Identity of Melodrama (Brazilian Film Night)

A birthday cake, three frustrated adults, and an apartment in Rio come together in "Bolo" ("Cake"), a short feature directed by Luisa Dantas. Brazilian Film Night concludes with A Negação do Brasil (Denying Brazil), in which Black actors and others discuss images of blackness in Brazilian television. (TEX, 9:30pm)

Headlining this program is A Day's Work, A Day's Pay, which charts the personal and political evolution of three New York City welfare recipients during the largest overhaul of the welfare system ever. (TEX, 7pm)

"El Silencio del Amanecer" ("Silent Dawn"), about the personal journey of a Salvadoran woman who escapes with her child to the U.S., opens the "Immigrant Tales and Memories" program, followed by "A Piece of the Earth," a charming and funny short feature about 101-year-old Don Aurelio. A former Mexican revolutionary, Aurelio's dying wish is to be buried where he was born and with his beloved wife in Palo Verdes. To please the feisty old man, his grandsons drive him with coffin in tow to his final resting place. Unfortunately, the land of their grandfather's youth is now part of a California suburb. Since it's too late to turn back, Don Aurelio forces his grandsons to follow through with their promise. The evening concludes with "Porvenir" ("Future"), about a vibrant community on the banks of Colombia's Magdalena River that thrives in spite of poverty and ecological decay. (TEX, 9:30pm)

Winner of the Special Jury Award for Documentary Feature at the South by Southwest 2002 Film Festival, Escuela (School) is filmmaker Hannah Weyer's second film featuring the Luis family. Weyer followed migrant farm worker Liliana Luis during her first year of high school, documenting the challenges she and other migrant farm worker students face in an educational system ill equipped to meet their needs. (TEX, 7pm) Also playing are Juvenile, about four teens in the San Francisco Bay Area (TEX, 7pm), and One Dollar, a deeply disturbing documentary about Panama City street life, where a dollar can buy cigarettes, drugs, and death. (TEX, 9:30pm)

Latinas: Myth and Reality A highly visual coming-of-age story set in 1950s San Antonio, "White Like the Moon" talks about the unspeakable: skin color, class, and the desire to fit in. When her mother insists she bleach her skin, 13-year-old Nita is painfully forced to accept that beauty may be skin-deep, but the attitudes that shape opinions of beauty and acceptance can cut to the soul. (MYEC, 7pm) Filling out the program are three more short films and the documentary feature Testimony: The Maria Guardado Story, in which a Salvadorian woman who survived torture during her nation's civil war shares her story of escape to the United States and her poignant return to her homeland. (MYEC, 9:30pm)

Vieques, Microcosmos de una Nación (Vieques, A Microcosm of a Nation): More on the Vieques struggle and its history. (MYEC, 7pm)

This short films program includes "El Ojo en la Nuca" ("The Eye on the Nave"), about a young man who challenges his father's executioner to a duel, and the animated border narrative "Un Brinco Pa'alla" ("A Jump to the Other Side"). (MYEC, 9:30pm)

Life and Death in Havana Two feature documentaries, How to Create a Rumba (ADD, 7pm), and Salsa Caliente, about salsa and sweaty dancers in Dallas (ADD, 9:30pm), are bookended by several Havana-themed shorts.

"The Late Show": The offstage life of a comedian as he struggles to stay fresh for his last show of the night. (ADD, 9:30pm)