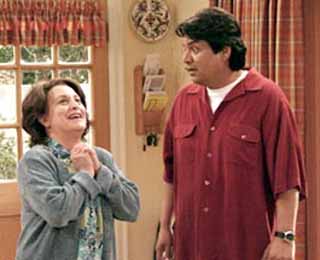 This year's Academy Awards may have provided a night to remember for African-Americans, but only time will tell if it was a one-night stand or a true sign of the future. In some ways, you could say TV is ahead of the curve when it comes to casting blacks and Latinos on the small screen. UPN and now ABC lead the way with new shows featuring ethnic actors. Of course, this comes after a couple of threats to initiate network boycotts by the NAACP and other organizations appalled at the lack of diversity on the airwaves. But hey, action is action. The question is: Is it forward-moving action?

For decades, blacks and Latinos found themselves represented as maids, crooks, pimps, whores, or drug addicts. After that came roles in supporting player roles or the "best friend." The door of the TV industry has since cracked open a bit more, and blacks and Latinos are now headlining in domestic dramas and sitcoms. D.L. Hughley stars in The Hughleys on UPN. Bernie Mac stars in his self-titled show on Fox. Edward James Olmos and his posse appear on American Family, a family drama on PBS. On ABC, the multitalented Wayne Brady headlines a variety show, while Damon Wayans and most recently George Lopez star in two more family sitcoms.

Have we fallen into a rut? Maybe so, but I wouldn't necessarily have a problem with this pattern, except for the fact that some of these shows seem to have been suffocated by the oft-told refrain that goes something like this: It's a delicate balance to feature an ethnic star in a series. While the flavor of the ethnicity needs to shine through, it still has to appeal to the widest possible audience.

"Why?" she asks with mock ignorance. No one cares if ethnic minority audiences don't "get" Seinfeld or Friends.

It seems to me that black actors have a better time on TV than Latinos. Nowadays, there's a certain acceptable (i.e. fabricated) hipness around black culture, but hijole! Throw in a Spanish word or two in a script and it's nearly deemed culturcide.

Which brings me to the newest victim of the new world of diversity TV, The George Lopez Show. Forget about the Seinfeld Curse. For Lopez, I believe it's a case of Margaret Cho whiplash.

George Lopez has been around awhile, first as a stand-up comedian, then as a radio DJ in Los Angeles. His bilingual comedy includes thoughtful social commentary, the ability to poke fun at the Latino/Chicano condition, and a rousting to sit up and take notice. None of this is present in his bland sitcom that premiered last week. Sure, Lopez is playing a character, but since the show is named for him, isn't the idea that his personality, his take on the world, his style are what's supposed to drive the show? Like Margaret Cho before him, Lopez's ethnicity is played for safe, old-school laughs. Lord help him if he's being as artistically strangled as Cho was during her brief but ill-fated encounter with ABC during her series, All-American Girl (painfully recounted in Cho's one-woman show, I'm the One That I Want). In the Lopez sitcom, when wife Angie (the consistently one-dimensional Constance Marie -- see American Family or any Gregory Nava project) finds out that their daughter has been skipping swim class, George responds, "Why does she have to know how to swim? We're already here."

The show has some saving graces. Departing from the "Mother as Saint" character, George's mother Benny (Belita Moreno) is a tart-tongued dervish. And thank goodness for that. Damn, you'd think La Nuestra Señora de Guadalupe was going to come and put the ojo on Hollywood, the way it clings to the saintly mother archetype (see Sonia Braga in American Family). Another pleasant element is the warm relationship Lopez has with his preteen daughter, Carmen (Masiela Lusha).

Is there room for improvement? Definitely. Will ABC give The George Lopez Show a chance to break out of this flavorless "Hispanic" mush? One can only hope. But this is the network that has canceled Once and Again (more on that later), so you never know.

It's true I didn't jump on the Once and Again bandwagon when it premiered. Sorry, I was not intrigued with the navel-gazing lovers played by Sela Ward and Bill Campbell. But I've always been a fan of the show's young people. Evan Rachel Wood, Julia Whelan, and Shane West are the finest young actors working on television today. And no, I don't care how hot those kids over on Smallville are.

The final episode of Once and Again airs April 15, 9pm, on ABC. But never say never. There are always opportunities for repurposing over on cable.

In a way, I owe Milton Berle thanks for my job. Like Ernie Kovacs, Berle was one of the early pioneers of television. He toyed with it, tested it, and ultimately commanded it for a while. He still deserves a world of thanks, so here's my tip of the hat.
More TV Eye columns