Pick of the Litter: 'Hell House' 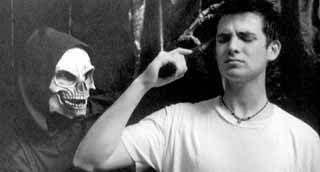 Near the beginning of George Ratliff's new documentary, Hell House, a group of volunteers at a Pentecostal church in Cedar Hill, just south of Dallas, are having a meeting to discuss the haunted house the church will put on in several months. Standing before the volunteers, Tim Ferguson, the director of "Hell House X: The Walking Dead," asks them if fear is a part of their ministry. This is a rhetorical question. "A part of salvation is being afraid of going to hell," he reminds them. Hell House X will raise substantial funds for the church, and, its leaders hope, convert spiritually uncommitted teenagers into born-again Christians. But the process church leaders employ to speed the great unwashed on the road to salvation is a matter of some controversy. There are no white-sheeted ghosts or grapes masquerading as eyeballs in this haunted house. Take the hospital scene: A woman is bleeding to death from a botched abortion while a man suffering from AIDS is on a stretcher next to her. She asks Jesus for forgiveness; he curses the day he was born. Guess who gets to go to heaven? Another room in Hell House X features a wife who is cast out of her family after initiating an adulterous affair over the Internet. At a rave, a woman uses drugs, then kills herself. After this grisly cavalcade of sin, everyone making the Hell House tour is led to a room and asked whether they want to accept Jesus Christ as their Lord and Savior.

In 1999, Trinity Church made national news because its haunted house featured a scene straight out of the massacre at Columbine, and the media coverage tended to portray Hell House as a flagrantly insensitive production. That's when Ratliff, who lives in New York but is from Amarillo, called the church. After six calls, he convinced church leaders that they should let him make a documentary about their haunted house. "After being beaten around by the press so much, they liked the idea that I was doing something that was more about the process of what they were doing," recalls Ratliff, whose documentary about his hometown, Plutonium Circus, won Best Documentary Feature at SXSW in 1995, and whose first feature film, Purgatory County, received honorable mention at SXSW in 1997.

Hell House is a documentary in the most absolute sense of the word: It records the phenomenon, but doesn't exactly editorialize about it. "It's as close to vérité as I could come," Ratliff says. "Some people think it's propaganda for the church, some people think it's making fun of them. People take it absolutely differently everywhere. I love that."

Hell House screens Sunday, March 10, at 7:15pm; Tuesday, March 12, at 4:15pm; and Thursday, March 14, at 1:15pm. All screenings take place at the Alamo Drafthouse Downtown. The filmmakers will be in attendance.