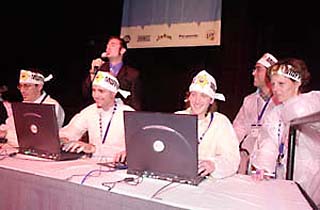 The Cosmic Muffins rule the Web! (Photo By John Anderson)

Honor and bragging rights were at stake. There were two teams, celebrity judges, and 10 computers. But most important of all, there was beer.

This was the scene of the First Iron Webmaster Showdown, performed live and fully clothed before rapt onlookers on the SXSW Interactive Festival Trade Show Day Stage at the Austin Convention Center Sunday afternoon. Following the format of the popular Japanese cooking show, Iron Chef, two teams were pitted against one another to design a Web site in an hour with prescribed raw text and images.

Hosting the event were Ben Brown of So New Media and Dana Robinson (maybeiam.com) of Washington, D.C. The two teams -- the Cosmic Muffins and the Console Jockeys -- obviously came to battle. Dressed in disposable jumpsuits and cloth headbands with the Cosmic Muffins logo, the Muffins made a grand entrance without any remorse. The Jockeys dressed in tasteful, professional IT garb -- khakis and button-down shirts. No one wore a pocket protector.

The hosts had the hardest job of the event. Unlike the Iron Chef show, which has the visual entertainment of flames rising and fish gutting, Brown and Robinson had only 10 Web geeks hunched over computer screens and their own snappy repartee to keep the audience engaged.

When it was over, neither team got very far. Missing plug-ins and other glitches stalled the process, proving, as Brown said, "that Web sites cannot be built in an hour. This work is harder than it seems," to which the audience broke into sympathetic applause.

In the end, and against all odds, one team finally snatched victory from the jaws of ... frustration. The winner of the first Iron Webmaster Showdown was the Cosmic Muffins.