And the Dewey Winburne Award Goes to ... 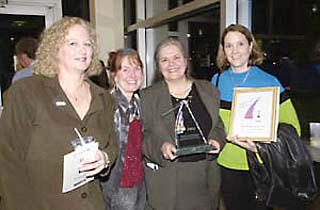 Sharron Rush (third from left) was rewarded for her community service at SXSW Interactive. (Photo By John Anderson)

"This has been an amazing day," said Knowbility.org's Sharron Rush as she accepted the Dewey Winburne Community Service award at Saturday night's SXSW Interactive Festival Opening Party, held at GSD&M. "We got to have a panel discussion about access to media for people with disabilities, and hundreds of people came."

That's important to Rush, who has led Knowbility since 1998, helping companies like Dell and IBM design their Web sites to accommodate people with disabilities.

The Dewey Winburne Community Service Award was begun in 1999 in memory of the recently deceased Winburne, one of the co-founders of SXSW Interactive, and designed to honor Austinites "using multimedia to level the playing field between the have's and the have not's," according to the program.

"This is a very special award for a very special man who is not with us," said Mayor Pro-Tem Jackie Goodman. "He invented bridging the digital divide before that was even a term." But after several attempts to quiet the loud noise from oblivious, partying SXSW attendees, which threatened to drown out the proceedings, Goodman finally said, "These people will never know what he did for us."

Of this year's Dewey Winburne nominees, Goodman said, "They've gone beyond creativity, tech skill, and inventiveness. They've gone to the heart of the Internet community."