Through a Lens Lovingly 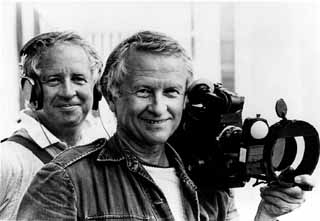 Al Maysles and his brother David, who died in 1987, were prime movers in the cinéma vérité or, as they prefer, "direct cinema" school of documentary-making. Pioneering the liberating technology of the Sixties -- a hand-held camera with a synchronous sound recorder -- the Maysles Brothers made famous a non-didactic, unobtrusive style of documentary: The filmmakers merely record, then edit, what the stories' subjects reveal through their own words and behavior -- without any direction from the filmmaker and purportedly without evidence of the filmmaker's point of view.

Al Maysles, who frequently brings to Austin selections from his over 40 years of filmmaking and dazzles students with his warmth and terrific war stories, is still making films at 75. His most recent, Lalee's Kin (co-directed with colleague Susan Froemke), is up for an Academy Award for best documentary. Acclaimed years ago as "the best American cameraman" by no less an authority than Jean-Luc Godard, Maysles has received many prestigious career awards; his 1968 film, Salesman -- one of the three feature-length documentaries to be shown as part of a SXSW retrospective -- was selected in 1992 by the Library of Congress as one of the 25 best American films ever made.

In a retrospective mode, I asked Maysles to talk about what's personally memorable in some of the films that will be shown at SXSW, in a career replete with what Orson Welles, in the short "Orson Welles in Spain," dubs "divine accidents."

The scene that still resonates for Maysles in 1970's legendary Gimme Shelter, about the Rolling Stones' concert tour that culminated in a killing at Altamont, is not the one you'd expect. "No question, it's when I'm filming the Stones listening to the playback of their song 'Wild Horses.' ... Somehow, roaming across their faces, I managed to be on exactly the right person at exactly the right time. I moved the camera over to Mick just at the right moment, at the conclusion of the song, when Mick gestures with his hands, indicating that the song was over. It was perfect timing, some of my best work, and shows that through their silence, while watching the Stones listening to their own music, you got more of a feeling about what the music was like than if they had just talked about it."

1968's Salesman, the film about the lives of door-to-door Bible salesmen, is the one about which Maysles says, "if I hadn't made it, I'd feel the saddest." And not only because he met his future wife at the film's screening. Maysles found powerful autobiographical elements in this film, namely a parallel between Paul, the conflicted Bible salesman, and Maysles' father, "both of whom had jobs that were beneath them. I always think the most powerful work of art is an expression of one's own life."

The scene that moved both Maysles and his wife-to-be was a long one, emblematic of the Maysles style: "Paul is sitting alone at a restaurant, staring off into space; we don't know what he's thinking, because he's not talking. But in that silence, we're more with him than if he had said something," explains the filmmaker. "Today, films are shot with quick cuts from scene to scene. Filmmakers are afraid of a long silence, afraid they'll lose the audience. But sometimes a long silence like that can hold the audience, engage them much more. We held the camera on Paul for quite a while, until finally he picks up his cards [his cold-call leads], raps them against the corner of the table, and goes back to work. The subject called the tune all the way through the scene. Another documentary maker would have felt compelled to ask, 'Paul, what are you thinking?' For us, that would have done damage to the power of the silence. That scene was definitely what I'd call a 'divine accident.'"

Another freely offered Maysles secret is that "it's very important to show a great deal of love to your subject. ... You convey that by the way you look at them. You get their trust from the 'gaze' in your eyes. Your subjects must feel empathy from you. That's not something you can fake; you have to empathize with people. I really like people, and if I have a hard time liking someone then I try to understand them."

Recently, while researching a story he's been asked to write for Vanity Fair about yet another legendary Maysles film, Grey Gardens (1976), Maysles came across an old, unopened letter from one of the subjects of that film, the recently deceased eccentric, Edie Beale, who lived with her aging mother in a decrepit East Hampton manse. Across the top of the letter, the always theatrical Edie had scrawled, "I've loved you for a long time."

"So this should be interesting," Maysles deadpans. Seems "the gaze" can have some unintended consequences even for a fly on the wall.