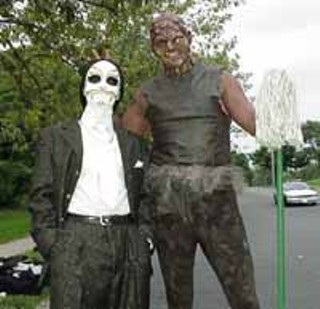 Troma Films is best known to movie buffs as the company behind such crude and lewd cinematic gems as The Toxic Avenger and Tromeo and Juliet. However, to legendary Troma co-founder Lloyd Kaufman (who is honored with a career retrospective at this year's South by Southwest Film Festival), these and other Troma classics are not only sincere stabs at truly independent filmmaking, but satire-spewing weapons in a cultural war against the corporate homogenization of the entertainment industry.

Not that Kaufman, born in New York City in December 1945, always had such lofty ideals in mind. The eldest child of Stanley Kaufman, an attorney who pioneered the type of stockholder class-action lawsuit we can soon expect from former Enron employees, and his mother, Ruth, who was heavily involved in the New York theatre scene, young Lloyd didn't exactly burn his childhood watching serials at the local cinema.

"It wasn't until I went to Yale that I happened to get roomed with a movie nut and caught the movie virus," Kaufman recalls. He wound up directing a feature there called Girl Who Returned that was influential for a reason beyond its artistic merits.

"We charged admission, and I learned the valuable lesson that no matter how bad a movie is, once people have paid their money, they're pretty unlikely to ask for it back."

Yet for Kaufman, now hooked on filmmaking, the perils of making movies for other people quickly became obvious.

"It seemed that I ought to be writing, directing, and producing my own movies, because whenever I'd work for somebody in the mainstream, I always wanted to do it my way, where they always wanted to do it the correct way," he chuckles. "So, it became apparent that I'd better form an independent movie company."

Kaufman teamed up in 1974 with fellow Yale alum Michael Herz to form Troma Films, a company that set out not only to make films, but distribute them as well. Following a successful sneak preview of their first film, Squeeze Play, AMC Theaters booked the raunchy comedy about a women's softball team, and the fledgling company was off and running.

Over the course of the next three decades, Troma became the leading B-movie distributor. Boldly forging into the brave new world of home video, Troma gradually built a colorful catalog of gleefully chauvinistic sex romps, sordid satires, and cartoonishly violent action films that would otherwise have never seen the light of day. Troma also served as a sort of "real world" film school for hungry young filmmakers determined to learn their craft, a boot camp of sorts not unlike the one Roger Corman had set up over at AIP. There was an important distinction between the two, however.

"There has never really been an independent movie studio that has lasted for 30 years," Kaufman points out. "Roger Corman is the only other one ... but he's sold his company two or three times along the way. Ours is the longest-running independent studio in history."

"Filmmakers today try to come up with projects that will satisfy Sundance rather than do something they believe in," says Kaufman. "They're making a movie about a left-handed, gay, one-legged mattress worker because they feel that Miramax'll give them a development deal, and that isn't the way art is made."

Still a filmmaker first and foremost, Kaufman continues to direct at least one or two Troma films a year. (The latest is, ahem, Tales From the Crapper.) Even if, as he freely admits, the studio's films aren't for everybody, the outspoken author, lecturer, and multihyphenate believes that Troma exists because it scratches a definite itch.

"There are a lot of people who ... feel that movies like What Women Want and John Q. are basically baby food ... And you can live on baby food, but it's very boring.

Which is probably why Troma -- and the irrepressible Lloyd Kaufman -- have been giving the corporate pabulum pushers indigestion for 30 years.