Alexandra Pelosi's 'Journeys with George': On the Campaign 2000 Trail or, Presidential Candidates Just Wanna Have Fun 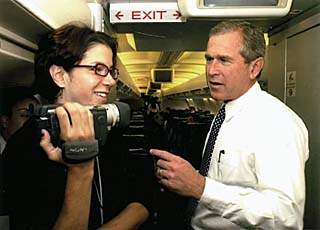 Journeys With George director Alexandra Pelosi says she had filmed "hours and hours of me eating turkey sandwiches before Bush stuck his face in the camera and started engaging."

The world awaits with bated breath the SXSW unveiling of Journeys With George, Alexandra Pelosi's "boys on the Bush bus" documentary, an all-access view from the back-of-the-Campaign 2000 press plane of the Cheetos-and-bologna-eating, Buckler-hoisting guy who would become our 43rd president. Be forewarned: Watching -- make that being riveted to -- this amazing film may require some mental gymnastics. Gaping at the charming, relaxed, unscripted-at-last party-animal manqué who willingly played to Pelosi's Sony mini-DV, you'll be trying to square what we know now of George W. -- post-election debacle, post-inaugural conservative-pandering, and, most crucially, post-September 11 -- with what we wondered about him then.

"After the campaign, people were constantly asking me, 'What was George Bush really like?' That is the question this film answers," explains the 31-year-old first-time filmmaker, who packed her own camera for the year-and-a-half road trip as a producer for NBC and later edited hundreds of hours of footage into a 75-minute film. (It should be noted that Aaron Lubarsky, another rookie, did a truly stupendous job editing this film.) According to Pelosi, she'd shot "hours and hours of me eating turkey sandwiches before Bush stuck his face in the camera and started engaging." It was when he pointedly asked her if she was making a movie and then suggested that she call it Journeys With George that the former Dateline producer realized she "had a movie on [her] hands." In truth, the fun-loving, "afterhours" W. that Pelosi shows us won't surprise those who know him personally and tried, usually in vain, during the campaign to explain his appeal to those who didn't get it. How else to account for the loyalty of those in high Democratic places for whom the Shrub's politics were anathema?

Pelosi, who is the daughter of California Democrat, now House Minority Whip, Nancy Pelosi, must find herself in a slightly uneasy post-production position, given the many hats she wore shooting her own film while representing NBC on this, the ultimate press junket. She insists, however, that her film be viewed through a strictly apolitical figure-ground template. "I never wanted to be an authority on Bush as a person or what kind of president he is," she states emphatically over the phone. "Bush is completely replaceable in this film -- it could have been Al Gore. I made this film simply to show what it was like to be a reporter sitting on the bus during a presidential campaign." Uh ... yeah, okay.

But that it certainly does -- in spades. With the first dicey lift-off of the rickety, wing-leaking New Hampshire-bound Access Air plane, so go any illusions of glamour we may have about the life of a journo in the traveling press corps. After the cellophane has been peeled from the umpteenth turkey sandwich -- and despite a spotting of media celeb Ted Koppel, hilariously flagged by two giggling, star-struck flight attendants -- we immediately begin to feel the tedium, exhaustion, and impending cynicism of daily life in what Pelosi calls the "bubble." Meet the media pack who are out of town for the births of their own children because they're off lugging boom mikes and shadowing candidates from content-less stump speech to confected photo-op in a doomed search for a scoop. An equipment-freighted Time magazine photographer sums up the press corps' awful dilemma, the campaign's "gotcha": Being part of the "bubble" makes the job both easier and more difficult -- he's granted the access he would not otherwise have, but that very access means he never "makes a good picture." Touché.

The film that Pelosi narrates in her low-pitched, brassy voice and thoroughly disarming personality feels just like the "Dear (Video) Diary" that it is. (In true amateur filmmaker style, when candidate Bush makes his first appearance on camera, as Pelosi introduces herself and he tongue-in-cheek-edly acknowledges her "stylishness" -- she's the girl with the purple glasses, nails, and wardrobe -- we're treated to a seemingly endless headless torso shot of him.) Nonetheless, there's an immediate and delightful chemistry between them, a snappy "us-them" repartee spurred by the candidate's obvious bemusement over all things Pelosi, including her budding interest in a fellow reporter they call "Newsweek man." ("I predict your relationship with Newsweek man will go beyond hand-holding," the governor prophesies.)

Periodically Pelosi points her on-camera mike at two longtime Texas political observers, R.G. Ratcliffe of the Houston Chronicle and Wayne Slater of The Dallas Morning News, and we get their outrageously cynical, deadpan comments on the vacuity at the core of their beat. Richard Wolffe, the Brit from The Financial Times and the only foreigner on board, the pack's de Toqueville, offers up his dead-on observations with warmth -- even trudging through the freezing snow, at 2am, en route to a wee-hours rally of the New Hampshire Republican booboisie -- and an inextinguishable twinkle in the eye. Unlike his jaded American colleagues, Wolffe thinks this American presidential campaign is "the greatest story in the world. It's got it all: human interest, a mixture of entertainment and information, big issues, big stakes; it's a big game but it's important," he says. Later he'll realize that "the great thing about this story is that we can pretend that it's somehow serious. Of course, it is serious. ... But at the same time, most of our time is spent doing really stupid things, in stupid places with stupid people."

The focus on Bush really begins when John McCain, the plain-talking, open-book darling of his press corps, wins the New Hampshire primary, and formerly overconfident Bush handlers Karen Hughes and Karl Rove boldly move to unshackle their own candidate and loose him among the Air Access pack. At first, Pelosi recalls, "there was a fight when the campaign attempted to keep it off the record whenever Bush came to the back of the plane to drink Bucklers and hobnob with the reporters. The reporters balked and said if he comes back here, we're going to write about it. So Bush stopped coming back there -- until he lost a few more primaries. Then he started coming back again, and the press started writing about it."

With Bush on board, the in-flight menu goes even further south -- now it's bologna sandwiches, the guv's personal fave -- but Pelosi begins to capture some of her best footage. Like the priceless scene with Bush mediating a back-of-the-plane happy hour dust-up between the quiet-seeking reporters and those who, in Bush's words, "only wanted to have a good solid margarita and get hopping at 45,000 over Nebraska." And the sure-to-become-famous "party animal comment": "These are my people. It takes an animal to know an animal," he proclaims, clearly delighted to be clutching a near-beer in the company of "my people, the tequila drinkers." Oops, he catches himself: "And I'm not admitting I'm an animal, with 60 days to go in the campaign. Just that I like animals."

In one of the more poignant scenes in 75 minutes of non-stop "decisive moments," Pelosi conducts an election-predicting straw poll of the pack, which Gore wins. Somehow, the results get leaked, and the pack shuns her, fearing the wrath of the candidate. "There was this unholy alliance between the campaign and the reporters," Pelosi explains. "The minute they wrote something he didn't like, he would get mad at them and not answer their questions at the next press conference." But Bush comes to her rescue: "When they see me talking to you, they're gonna act like they're your friends again. But these people aren't your friends. They can say what they want about me. But at least I know who I am, and I know who my friends are."

In the end, The Financial Times guy nails it: "As a politician, Bush is much smarter than people give him credit for. Look how everyone goes weak in the knees when he comes back here -- he's got a lot of charisma, even though he's a pretty bad speaker." But still later, the twinkle's gone, replaced by the stricken look of the hunter who's been captured by the game: "I have this nagging feeling that the [Bush] 'pack' has not always done the right thing. The Gore press corps is about how they didn't like Gore, didn't trust him, and that kind of filtered through to their stories. Over here, we were writing only about the trivial stuff because he charmed the pants off us."

Actually, come to think of it, there's a parallel here: Bush may have disarmed his entourage with charm, but didn't Pelosi do a similar number on Bush? He won the election; she got the best unscripted picture of our future prez. As Newsweek man put it, enviously, "You're the best interviewer I've ever met. You have this kind of 'I'm just kind of fucking around, I'm wacky girl' -- and then you get people to spill their guts. It's a very interesting technique -- but it won't work on me."

NOTE TO FILE: Come to think some more of it, "it" might have "worked on" me: The girl in purple said she'd talk only to the Chronicle before the film's premiere. But danged if stories and interviews didn't began popping up in publications like Time, The Washington Post and, most recently, the conservative Weekly Standard. Ah, but we got to see the film first. Journalists trying to outfox journalists. What would Janet Malcolm say?

Journeys With George will have its world premiere at the SXSW Film Festival Friday, March 8, 9:15pm, at the Paramount Theatre (713 Congress). Director Alexandra Pelosi will introduce the film and conduct a Q&A afterward.