William Shatner and Harry Hamlin face off at the Four Seasons 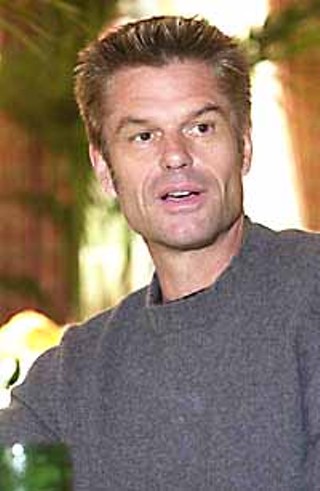 L.A. Law-yer Harry Hamlin and Renaissance spaceman William Shatner were in town last week, lunching at the Four Seasons and chatting up their new film Shoot or Be Shot, an indie comedy about an escaped lunatic/wannabe screenwriter who forces a film crew at gunpoint to read his script. The film has already quietly exited local theatres (so much for a bang), but the two left behind quite a few emblematic, surreal clichés of the celebrity interview, the bizarre quotient notched up significantly by the presence of Captain James Tiberius Kirk aka the Transformed Man aka TJ Hooker aka Rescue 911 Guy aka Iron Chef USA aka the Priceline Troubadour aka the Bert Parks of the 21st Century aka the Rocket Man himself -- William Shatner:

The Shatner Wit -- on Casting:

The 'I Can't Believe You Asked About That':

"Actually, somebody a few years ago said they were thinking of doing a Clash of the Titans II. I never heard anything more about that ... I certainly hope not, since I would have to play Zeus in that -- or a very geriatric Perseus!

-- Harry Hamlin, on reprising his role in the 1981 sword-and-sandals epic

Hamlin: "We discovered that the amount of money that big budget movies spend on perks could make an independent film like ours."

Hamlin: "I don't even know what the budget on this movie was."

Shatner: "You don't want to know!"

Hamlin: "A couple of movies that I've done, my per diem alone I'm sure would have produced this movie!"

Shatner: "And the per diem you're getting on this film?"

Shatner: "Didn't you write the same check that I did to do this film?"

Hamlin: "I had a broken water main in my house and called Roto-Rooter, and they gave me an estimate of like $2,000 to fix it, and I said to hell with that, I'm gonna rent a jackhammer and do it myself. It was a brutally hot day, and I got a phone call that they wanted to see me for this movie. So I said, as soon as I get this leak fixed, I'll go down. I was covered with grime and filth, and they thought that I had staged the whole thing -- that I had figured out a way to look like this real homespun guy, when in actual fact I was out playing 'Mr. Roto Rooter'!"

Shatner: "With me it was basically the same -- I had a water main burst at my house, and I called Harry to fix it. The check bounced!"

"If a physicist puts all the elements of making a movie and puts them in a model -- it doesn't work." -- Some guy who had been sitting silently at the table all along but never introduced himself, and then he just suddenly blurted this out at the end of the interview.