Web celeb Greg Falcon and the weird wonder of fanimutation 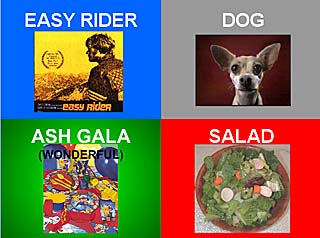 -- from "Dash," a fanimutation by Veloso, aka Greg Falcon

You know how people get the lyrics to pop songs wrong, like the person who notoriously mistook Jimi Hendrix's "Excuse me while I kiss the sky" for "Excuse me while I kiss this guy"? Or, less well-known, the snotty cheerleader in my gym class who insisted that Mr. Mister's "Kyrie Eleison" was actually titled "Give Me a Laser"? Well, that's kind of what's going on with fanimutation. Except in a fanimutation, the badly interpreted song is generally in another language -- usually Japanese -- and animated with choppy pictures that look cut out of a magazine or scribbled on, as if the creator got bored during Study Hall. Andy Richter with googly eyes. Justin Timberlake's head pasted on the body of a dog. Bob Barker. So what you get is this cheeky pop-culture mish-mash that could very well be satirical and could just as easily be utterly meaningless. It's one of those Web phenomena you know either all or nothing about.

Which brings us to Greg Falcon, aka Our Local Angle. Twenty-three years old, works for a North Austin software company, and you can call him Veloso. That's his online name, short for Very Low Sodium (for no reason, especially, except a can of Coke was nearby). And Verylowsodium.com is the Web site where, along with webcams and other assorted online gimmickry, you can find Falcon's funny "Dash" and even funnier "Irrational Exuberance," which takes the art of fanimutating to a new level of silliness with its roll call of American products and personalities -- the good (The Simpsons), the bad (Richard Simmons), and the gloriously in-between (The Price Is Right and those fabulous, fabulous prizes!).

The story of Greg Falcon/Veloso and fanimutation begins less than a year ago in suburban Massachusetts with Neil Cicierega, a then-14-year-old home-schooled kid with some spare time and an eccentric sense of humor. Using Flash animation tools and a Pokémon theme song, Cicierega created the brief but memorable "Hyakugojyuuichi." It is fun. It is funny. It uses pictures of Harry Potter and Pee Wee Herman and evinces a strange love/hate for Colin Mochrie, the minor celebrity of Whose Line Is It Anyway? Cicierega dubbed his creation "animutation," and it quickly became one of those nutty Internet things you shoot off to 15 friends -- "Check this out! It is like SO CRAZY!" -- and so on, spreading faster than lunchroom gossip.

Salon crowned Cicierega a new teen Web celeb ("All Hail Neil Cicierega"), while others paid him the ultimate compliment of imitation in the form of "fanimutation" -- zippy little pieces of animated funny in the style of Neil Cicierega. One of those fans is Greg Falcon.

"I found Neil's stuff so weird and so compelling," Falcon says. "I thought, 'I've gotta make one of those.'" So he did. The result was "Dash," a tribute to everyone's favorite alterna-salt, Mrs. Dash, that was made in one obsessive weekend using a song from the Nintendo 64 game Mystical Ninja Starring Goemon. In November, Falcon made "Irrational Exuberance," using a song from a Japanese comedy sketch making fun of boy bands. The strangely addictive chorus goes "Yatt-tah! Yatt-ah! Yatt-ah! Yatt-ah!" (Japanese slang for "I did it!"). Neil Cicierega posted Falcon's pieces on his high-traffic Web site "Animutation Central," helping launch them into cubicles and chat rooms everywhere. At last count, more than 75,000 people had seen "Irrational Exuberance." It has been linked and forwarded endlessly, and has even spawned its own imitations. There's a reason: It's hilarious. Too many f/animutations are one-note and slapdash, even for a genre started and primarily maintained by teenagers. Conversely, "Irrational Exuberance" displays a real wit, from the made-up lyrics to the intricate and multilayered animations. Sure, some of the jokes tank and the style is derivative. But even innovator Cicierega's animutations derive their style from comic touchstones like Mad magazine and those wonderfully weird Monty Python cartoons.

This March, Falcon hopes to launch another fanimutation. "There's going to be six games and four songs, and it's going to be ridiculously massive." In the meantime, he wouldn't mind animating a legitimate original song -- say, if there were any aspiring bands out there looking for a low-tech, high-concept way to make a weird video. Hey, he turned Japanese into "Goo! Goo! Goo! Goo! O-HIO!" Imagine what he could do with English.