There are hints of a meaty complexity to Welles' The Magnificent Ambersons beyond its doomed-love motif, but the 88-minutes-long film, while striking, is too brief to really explore all that it hints at. 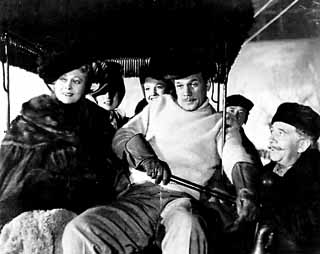 Based on the 1918 Booth Tarkington novel, The Magnificent Ambersons positions the newly emerging automobile as the signpost for an American society in transition. The automobile's general speeding up of the world badly clashed with the sense of leisure of turn-of-the-century's upper class, as represented by the Amberson family. At film's beginning, the Ambersons still rule the roost in late-1800s Indianapolis -- a town in which, as writer/director Orson Welles' voiceover wryly evokes, "all the women who wore silk or velvet knew all the other women who wore silk or velvet." In short, a town in which the Ambersons were still magnificent. But poor financial decisions eventually whittle away at their fortune, and unwise marital choices condemn Amberson scion Isabel (Costello) to a dull marriage to the even duller Wilbur Minafer (Don Dillaway). Isabel finds her only joy in their son, the snide, spoiled George Amberson Minafer (played as an adult -- and played irritatingly -- by Holt); that is, until her former suitor, Eugene (Cotten), an automobile designer and single father, returns to Indianapolis, and Isabel and Eugene fall in love all over again. But their affair is once again cut short when the tempestuous George, egged on by his spinster aunt (the marvelous Agnes Moorehead), demands his now-widowed mother turn down Eugene's marriage proposal and sever all ties with her lover. There are hints of a meaty complexity to Welles' film beyond its doomed-love motif: society in confusion, the slow death of old money, Oedipal love, the automobile as metaphor for technology's simultaneous power to create and to destroy (a fascinating conceit that's pleasantly ironic, too, when the contemptuous George -- "they'll never last!" -- is hit by one). However, the 88-minute-long film, while striking, is too brief to really explore all that it hints at. In one of history's great might-have-beens, there once existed a 132-minute cut of The Magnificent Ambersons -- the version Welles shot and approved, apparently full of the depth and tangledness and rich tragedy the truncated version only intimates. However, after a disastrous preview of the original cut, RKO Studio wrenched control of the film away from Welles, employed others to re-shoot key sequences -- including the ending, now egregiously upbeat -- and demanded then-editor Robert Wise (later, director of The Sound of Music) submit a dramatically scissored cut of the film. (David Kamp's piece "Magnificent Obsession" in this month's Vanity Fair recounts in much greater detail the controversy, as well as subsequent and unsuccessful efforts to locate the excised footage.) By all accounts, the missing 44 minutes were destroyed years ago; Welles' shooting script was used in Alfonso Arau's recent remake of the film airing on A&E, in the hopes of better re-creating Welles' lost vision. But 88 minutes is all we'll likely ever have of Welles' original. It's an intriguing, masterfully shot, sometimes heartbreaking piece ... but the most keen heartbreak comes from the what-might-have-been.