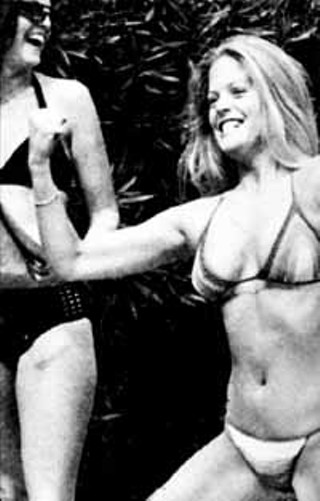 All-American blonde Candy Hope (Rialson) makes her way from Indiana to Hollywood to have a go at the movies, but soon finds out that Tinseltown isn't all it's cracked up to be. She finds herself taking on various action roles and acting in a movie in the Philippines produced by Miracle Pictures, a low-budget outfit not unlike Roger Corman's infamous American International Pictures (which produced Hollywood Boulevard). While on location, Candy is beset by prima donna rival actress Mary McQueen (Woronov) and by the dead bodies that soon start piling up on the set. The plot may be skimpy, but Hollywood Boulevard is a trove of references for fans of Corman and AIP/New World movies in general. Dick Miller plays agent Walter Paisley (also his character's name in A Bucket of Blood, Chopping Mall, and The Howling); another character is named Duke Mantee, the name of Humphrey Bogart's character in l936's The Petrified Forest. The film liberally borrows action footage from Death Race 2000, Big Bad Mama, The Big Doll House, and The Terror (which Candy and Paisley go to see at a drive-in). Even the name of the screenwriter character, Patrick Hobby, refers to a hack writer character of F. Scott Fitzgerald's. Of course, in addition to giving B-movie fans a little self-referential fun, AIP saved a bundle of money by just recycling action segments from other films (keeping the budget down to a scant $50,000). The in-jokes never seem to end: posters for Teenagers From Outer Space and Untamed Youth, the Miracle Pictures director (played by Paul Bartel) reading a copy of Sight and Sound, Paisley auditioning Forbidden Planet's Robby the Robot. Hell, even Commander Cody and the Lost Planet Airmen show up out of nowhere and play a song. It's doubtful, though, that even the sharpest-eyed viewer would spot horror maven Forrest J. Ackerman as a party guest, or longtime screenwriter Charles B. Griffith in another tiny bit part. It's all very goofy, loose, tongue-in-cheek, and politically incorrect fun that's aimed straight at the drive-in aficionados in the audience. Indeed, the outdoor screen at an ozoner, soundtrack rattling over a tinny speaker, might be the ideal setting for seeing this Seventies curiosity. Remember: "If it's a good picture, it's a Miracle!"