Take This Envelope and Stuff It 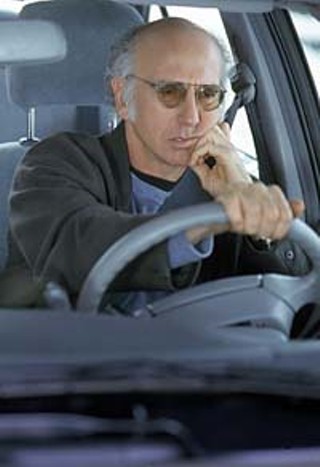 Larry David is trying to curb his enthusiasm over having to sit through another freakin' awards show.

Anyone who watches TV with any regularity knows that awards shows are now an unavoidable staple of TV programming. This month alone there's the American Music Awards (Jan. 9), the People's Choice Awards (Jan. 13), and the Golden Globes (Jan. 20). Last Saturday, I tuned into the First Annual American Film Institute (AFI) Awards broadcast live on CBS. Just what we need, I thought. Another awards show.

Not that the AFI isn't a valuable institution. Its efforts at film preservation and restoration have done much to save vintage films from being lost forever. I'm all for that. But since when did the AFI take an interest in TV? This question wasn't answered, leading me to speculate that, in addition to seeking a higher profile, the AFI was pining to make itself the U.S. version of the Golden Globe Awards (given to film and TV by the Hollywood Foreign Press Association). Unfortunately, the process for determining the TV nominations and winners of the AFI Awards seemed poorly conceived. This only made running into yet another awards show that much more annoying.

There were some interesting nominations. Buffy the Vampire Slayer, long ignored by the Emmys, was given a place among Best Drama Series nominees that included Six Feet Under and The Sopranos (both on HBO), along with NBC's The West Wing. Die-hard Buffy fan that I am, even I didn't think it had a chance. (The Sopranos won.) Of the Best Comedy Series nominees, the often overlooked Curb Your Enthusiasm (HBO) took the award, beating Everybody Loves Raymond (CBS), Malcolm in the Middle (Fox), and last year's Emmy winner in the same category, Sex and the City (HBO).

The acting nominations were decidedly peculiar. No distinction was made between comedy and drama, which meant that Ray Romano (Everybody Loves Raymond) was pitted against James Gandolfini (The Sopranos), Michael C. Hall (Six Feet Under), and Chi McBride (Boston Public) in the Best Lead Actor in a Series category. (Gandolfini won.) On the women's side, Edie Falco (The Sopranos) took the AFI's Best Lead Actress in a Series award, beating Allison Janney (The West Wing), Jane Kaczmarek (Malcolm in the Middle), and Doris Roberts (Everybody Loves Raymond).

At the very least, an awards show should be entertaining. A dorky musical number or two would have helped the clumsy, lackluster AFI event. Adding insult to misery was the heavy-handed message that AFI nominees and selections, along with a film diary of the year's most important events (e.g. the release of Pearl Harbor -- AFI's choice, not mine), would be made part of the official AFI archive. The gravity of this task became clear when an AFI official reminded viewers that President Lyndon Johnson supported the formation of the AFI oh-so-many years ago. Therefore, this is a mighty big, important gig we got going here.

Give me a break. This declaration of self-importance only made the AFI show a more bald representation of what most awards shows are: a long infomercial about what media you should consume, where "quality" is determined by what makes the most money.

Who knows what behind-the-scenes deal-making went on to get the AFI Awards or any other awards show created and on the air? Apparently, there's a lot at stake in these awards shows, but for whom? Longtime TV producer Dick Clark recently filed a $10 million lawsuit against Grammy Awards chief Michael Greene, citing unfair competition practices. He charged that Greene told Michael Jackson that if he performed on Clark's American Music Awards Show, he couldn't show his face at the Grammy's. Jackson reportedly smoothed things over by agreeing to appear on Clark's show, but it's unclear at press time whether Clark will drop his suit. He claims that the Grammy's haven't played nice for years, according to a Jan. 7 update in TV Guide Online.

And what role do viewers play in all this? Everything and nothing, it seems. Viewers' contribution is limited to providing Internet votes that may or may not play a role in deciding who wins some of these awards. More important, viewers provide ratings numbers that can be used to sell a show again. And most important, high viewer turnout hopefully translates into customers running out to purchase music, film, or TV products hawked at the show.

I suspect the average viewer has one or two favorite awards shows they watch out of loyalty or habit, while ignoring the rest. I'm a sucker for the Academy Awards, I think the MTV Movie Awards are a hoot, and I'm a great fan of the Independent Spirit Awards, which airs on Bravo. My hope is that in addition to gobbling up the glitz and glamour, the hype and the hokeyness -- or in the case of the AFIs, "art" for your own good -- viewers realize they're being fed a bill of goods. Cha-ching at your own risk.