This 1978 animated Rankin & Bass production of Tolkien's The Hobbit works successfully on both a children's and a universal level. 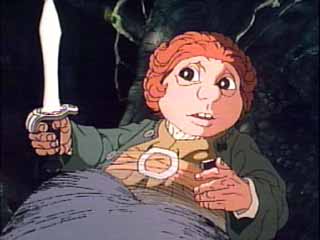 Many moons ago, there was a time when goblins walked the earth. Goblins, as well as men, elves, dwarves, and ... hobbits. The era was the late 1970s, and sword-and-sorcery mythologies were at their peak, with J.R.R. Tolkien's The Lord of the Rings trilogy at a popular ebb and Dungeons & Dragons mythos riding on its coattails. Seemingly every other rock band around was slapping trolls, dragons, and other fantastical creatures on their album covers, and, accordingly, children's entertainment was at a successful juncture, with Sid & Marty Krofft and Hanna Barbera leading the pack. Into this era was born the animated Rankin & Bass production of The Hobbit. And, truth be told, rarely has a kid's film been so successful on both a children's and a universal level. There's everything here that kids love -- humor, likable characters like Mr. Bilbo Baggins, memorable music, high adventure -- and some of what we all love about fantasy -- that is, the idea of the little man thrust into the great big world beyond. The animated feature is, at the same time, as faithful an adaptation as can be hoped for, and it truly captures the Tolkien spirit, thanks in part to the outstanding voice work of John Huston as Gandalf, Orson Bean as Bilbo, and Richard Boone as the great dragon Smaug. The stellar artwork, too, is in keeping with the novels; it's not what you would call state-of-the-art, but little about Tolkien's Middle-earth is. The Hobbit succeeds to this day not in spite of, but because its beautiful watercolored style, similar to Tolkien's own artwork, is so anachronistic. The animation is clearly lacking, but who cares when the characterizations of the fearsome trolls, the eccentric wood elves, and especially the vile Gollum are so spot-on. Bilbo's encounter with Gollum in the cave is easily the most unforgettable scene, with the freakish gnome ("Yessss, my precioussss") forever haunting the subconscious of viewers young and old. Song is key to Tolkien's work, and Rankin & Bass use them generously as a narrative tool. The best of the bunch is the main theme, a folksy nod to growth and change delivered by the amazing human-tremolo voice of Glenn Yarborough: "The Greatest Adventure." And so it is.