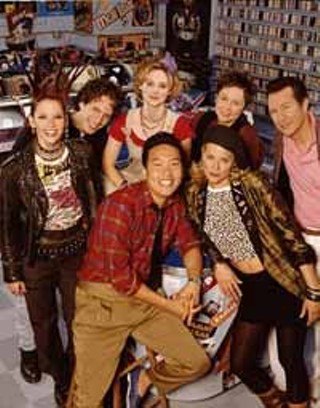 Hey! It's the holiday season. Time to get out, spread good cheer, drink too much eggnog, and kiss your boss's life partner at the office party. Or, you could stay home and watch television. Here are a few things to look forward to on the tube in 2002.

Hank Azaria stars in his own sitcom, Imagine That. Best known for his work on The Simpsons and his Emmy Award-winning performance in Tuesdays With Morrie, Azaria plays a TV writer whose daydreams come to life. Katey Sagal (Married ... With Children, Futurama), Jayne Brook (Chicago Hope), and Joshua Malina (Sports Night) co-star. The show premieres Jan. 8 on NBC, taking the 7pm spot formerly filled by Emeril.

Foodies are likely familiar with chef and author Anthony Bourdain from his bestselling memoir Kitchen Confidential. Now, Bourdain hits the small screen in a new series, A Cook's Tour: In Search of the Perfect Meal. Cameras follow the roguish chef -- who claims he was hammered the entire time -- on a world tour sampling exotic local cuisine (cobra, anyone?). Bourdain makes his television debut on the Food Network, purveyors of those celebrity chefs Bourdain disdains so much. (Emeril Lagasse was a favorite target until a mutual pal asked Bourdain to cool it.) A Cook's Tour premieres Jan. 8 on the Food Network.

Welcome another entry in the reality genre, The It Factor. The new documentary series follows 12 New York actors as they go on auditions, meet agents, and face rejection in the toughest business to thrive (and even survive) in. The series premieres Jan. 6, 8pm, on Bravo.

Joe Mantegna co-stars with James Garner and Charles Durning in a new drama titled First Monday. The drama follows the inside workings of a Supreme Court split between conservatives and liberals. Mantegna plays the newest justice to the court. First Monday premieres Jan. 15 on CBS, then moves Jan. 18 to its regular time slot on Fridays. It takes the slot vacated by That's Life, which returns to its original Saturday time period, vacated by the thankfully canceled Citizen Baines.

Like That '70s Show? Then tune in to another comedy by the Carsey-Werner team. This one is called That '80s Show and features a group of 20-year-old friends living in 1984 San Diego. The series premieres Jan. 23 on Fox.

On cable, HBO subscribers can look forward to the television premiere of two films adapted from stage plays or performances. The Laramie Project, based on the performance about the murder of gay college student Matthew Shepard, airs sometime following its Sundance Film Festival premiere in January. In February, Eve Ensler's Obie Award-winning performance in The Vagina Monologues is the subject of an HBO documentary about the controversial and critically acclaimed work. It airs in February.

Praised for its production of period films, the A&E Network presents Alfonso Arau's remake of Orson Welles' The Magnificent Ambersons. A January premiere date is expected.

Super Bowl XXXVI is scheduled for February 3 on Fox, which means that stunts to gain viewers before, during, and after the game are in the works. To keep viewers tuned in after the game, Fox offers an hourlong Malcolm in the Middle post-Bowl special. Bradley Whitford (West Wing), Susan Sarandon, Christina Ricci, Heidi Klum, Tom Green, Magic Johnson, Howie Long, Terry Bradshaw, and others guest star. Whitford, who's married to Malcolm's Jane Kaczmarek in real life, plays a volatile husband Lois knocks heads with at Hal's company picnic... NBC seeks to lure Super Bowl viewers away by presenting an 80-minute Fear Factor special featuring Playboy Playmate contestants. (So, instead of eating bugs, they eat Twinkies?) The special begins during the game's halftime... Speaking of Fear Factor, it returns for a second season in January. Hosted by Joe Rogan, Fear Factor takes a Monday time slot from The Weakest Link starting Jan. 7, 7pm, on NBC... An early evening version of The Weakest Link also premieres on Jan. 7, 6:30pm, on KEYE.

TV series scheduled for release on DVD and VHS after the new year include: Showtime's Queer as Folk: The Complete First Season, is set for a Jan. 8 release date. Find details at www.showtime.com... The first season of HBO's The Larry Sanders Show will be released Feb. 26. The three-disc set includes all 12 episodes. Check www.hbohomevideo.com for details... The second season of Michael Moore's The Awful Truth is now available. It includes all 12 episodes along with Moore's commentary on four of the episodes. Not available in stores at press time, order at 800/314-8822 or go to www.docurama.com... The very first season of M*A*S*H is featured on a three-disc set, featuring all 24 episodes first seen in 1972. For details, go to www.foxhome.com.

And last, but not least -- the first season of Buffy the Vampire Slayer will be released Jan. 15. Online vendors like Amazon.com are already taking pre-orders, ranking it among its top 10 most requested products. Will there be an album of the musical episode of BtVS ("Once More, With Feeling")? Your guess is as good as mine. The official BtVS Web site has been collecting votes to gauge interest, in the process whetting fan's expectations. However, no official release date is set at press time. Go to www.buffyupn.com to check on any progress and cast your vote.