The Night of the Hunter

1955's The Night of the Hunter stars the terrifying Robert Mitchum as a reverend with an evil-Elvis swagger, complete with knuckles on his right-hand tattooed with "LOVE" and knuckles on his left with "HATE." 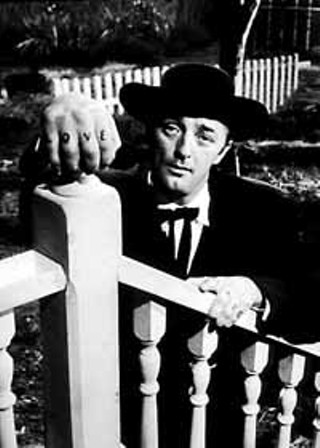 D: Charles Laughton; with Robert Mitchum, Shelley Winters, Lillian Gish, James Gleason, Evelyn Varden, Peter Graves, Don Beddoe, Billy Chapin, Sally Jane Bruce. The fatal heart attack James Agee suffered three months after The Night of the Hunter's release was most likely not brought on by watching it -- he adapted the screenplay himself from Davis Grubb's novel, after all -- but cardiac arrest wouldn't be such an outrageous fate for the rest of us. Legendary actor (The Hunchback of Notre Dame, The Suspect) Charles Laughton's first and only credited directorial effort is like watching a particularly disturbing photograph develop: The slow, throbbing tension is a cruel kind of teasing, while the eerie lighting and jagged shadows foster startling imagery and contrast the always wonderful Winters' saintliness -- "I feel clean now; my whole body's just a-quiverin' with cleanness," her Willa says at one redemptive point -- with Mitchum's evil-Elvis swagger, complete with knuckles on his right hand tattooed with "LOVE" and knuckles on his left with "HATE." He's Rev. Harry Powell, a traveling preacher who's got a knack for finding widows and then finding their money. In between, of course, is murder. After Ben Harper (Graves) -- if not an innocent criminal then certainly a Depression-era Robin Hood -- robs a bank and kills two men, he hides the $10,000 booty with his kids and makes them swear to not tell a soul. In prison, his cellmate is Powell, who catches Harper talking about the cash in his sleep. Later: Harper is hanged. Willa is a widow. Powell comes to town. The rest, as they say, is a noirist thriller laced with German expressionism and enough fog to conceal the indictments of bad religion and bad parenting lurking in the mist. In other words, The Night of the Hunter is undoubtedly the stuff of David Lynch's formative years, especially with its unsettling soundtrack, rural fairy-tale sets, and artsy, innovative editing. As John, a 10-year-old struggling to protect his inheritance and his mother, Chapin (whose adult work would include absolutely nothing) is full of nervous tics, wide-eyed surprise, and slit-eyed suspicion. He is outstanding, outshining at times even Mitchum, whose role as the sinister Max Cady in Cape Fear seven years later pretty much found its origins here. "Cheeeelllddren," he taunts in one scene, descending into the basement where John and his toddling sister Pearl (Bruce) have holed up. "Children, I can feel myself getting mad." Yikes and good Christ. I can feel myself getting frightened. Beginner's luck for Laughton and a blessing for American cinema.