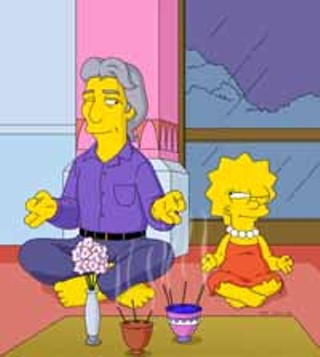 Special guest Richard Gere helps Lisa along the path to enlightenment on The Simpsons.

I'm not the churchgoing type. I never did go in for Easter dresses or Bible studies or Mass (except Christmas Mass, which I still like). There was that unfortunate time in my teens when my mother dragged me to the Kingdom Hall to listen to the pontifications of the Jehovah's Witnesses. Considering how determined the Jehovah's Witnesses are to save you, I'm sure they would be horrified to know they knocked an interest in God right out of me. When I decided that I'd had enough, I called myself an atheist. Later, I decided I was really agnostic. When I outgrew that, I decided I did believe in God, I just didn't care much for organized religion. And don't get me started on missionaries. For those who worry about my heathen soul going to hell, don't worry. I get plenty of God on television.

If the five religious channels on digital cable or the church services on public access and daytime WB aren't enough for you, all you need to do is turn to prime time. Past offerings like The Flying Nun, Amen, and the short-lived Soul Man had religion as their backdrop, though they really didn't discuss the subject deeply. If anything, these shows used the costuming and circumstances of their religious characters for comic relief. Sister Bertrille's (Sally Field) cornette allowed her to take flight when the wind was just right, and Dan Aykroyd's Reverend Mike in Soul Man rode his Harley wearing a motorcycle jacket over his minister's garb. As for Amen, it's notable contribution was that it was the first show with a religious backdrop to be a hit. It starred Sherman Hemsley as an overbearing deacon with a cast of colorful church folk.

God came on stronger in the Eighties in Highway to Heaven (1984). Michael Landon played a probationary angel, sent to Earth to ride around the country on his motorcycle (again with the motorcycle), bringing messages of love and compassion to troubled humans. A similar, but much more blatant vehicle for religion is Touched by an Angel. Premiering in 1994, it stars Roma Downey as an angel-in-training, who intervenes on God's behalf to show wayward humans "the way," and most importantly, utter this line as dewy-eyed as possible at the climactic moment of each episode: "God loves you." A short-lived spin-off from Touched was The Promised Land. This time it was a family fresh from their encounter with angels, set upon the open road to inspire goodwill among men.

It wasn't till 1999 that a likable, quirky dramedy not only assumed the presence of God, but the devil, too. In USA's Good vs. Evil (formerly GvsE and now canceled), Clayton Rohner played Chandler Smythe, a murdered reporter invited to join "the corp," heavenly agents who abort human-made pacts with the devil and battle Morlocks -- bitter people whose deals with the devil didn't take. Smythe worked Hollywood with his partner Henry McNeil (Richard Brooks) searching for almost-lost souls.

According to these prime-time representations of religion, humans are constantly in need of divine guidance and must be saved by a male, Christian God who only shows himself through the face of mostly well-groomed, well-meaning white folks (except McNeil, who was black). Speaking of well-groomed white folks, 7th Heaven, the WB's longest running and most popular show, has been espousing wholesome Christian family values since 1996.

The rare departure from this formula is Charmed. Unlike their Christian counterparts, these women on the WB series are witches-in-training. However, if Wicca is the religious inspiration of this show, it's never mentioned by name, staying instead on the more palatable and acceptable fantasy of the woman who can't manage her own power and is therefore in constant need of guidance. As witches, you'd think that guidance would be from a female mentor. Instead, the Charmed women rely on male, otherworldly beings.

God is everywhere on television. That is, if you're content with the narrowly defined, mainstream version. That's not to say that prime time hasn't offered discussions of God and religion in smart, less conservative terms. For this, you must turn to the wonderfully subversive The Simpsons on Fox. For those with more irreverent tastes, there's South Park on Comedy Central. By virtue of being "just a cartoon," each has interrogated and outright skewered modern organized religion to the delight of those unsatisfied with following the mainstream herd.

This weekend, the eternally curious Lisa Simpson approaches the subject again in The Simpsons' Sunday episode ("She of Little Faith"). Disgusted with how the family's regular church has been turned into a business by Mr. Burns, she turns to the Springfield Buddhist Temple for an alternative vision, causing Reverend Lovejoy to wonder "what to do about Marge's devil daughter." As no cow is too sacred on The Simpsons, there will surely be jabs left, right, and center as Lisa comes to terms with her spiritual quest, guided by Richard Gere (as himself).

Buddhism as an alternative to mainstream Christianity -- and on prime-time television? Who'd a thunk it? Though some of my relatives will worry for my mother's devil daughter if they find out I watch The Simpsons, in the end, I only have God to answer to, right?