Occasionally a bit preachy with its critique of advertising or the Eighties commodity mindset, How to Get Ahead in Advertising is a still-relevant satire about an ad man who sprouts a talking zit on his shoulder. 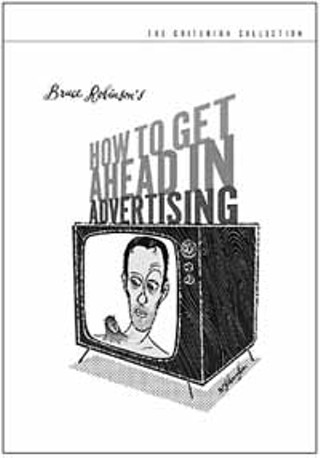 D: Bruce Robinson (1989); with Richard E. Grant, Rachel Ward, Richard Wilson, Jacqueline Tong, Susan Wooldridge, John Shrapnel. Dandruff was never a problem for Denis Bagley. Neither was baldness. But pimples are an entirely different matter in writer/director Bruce Robinson's anti-consumerism comedy How to Get Ahead in Advertising. Richard E. Grant -- who also starred in Robinson's directorial debut, the cult hit Withnail and I -- plays Bagley, a ruthless creative ad executive who never found a malady that he couldn't sell a fix for ... until he met the everyday, all-too-common zit. The symbolism-laden pustule cream defies Bagley's advertising genius at every turn and ends up sending the ad man over the edge. But Robinson's nonstop, mean-spirited commentary on the evils of the advertising industry -- which "could sell shampoo to a bald man" -- is just getting started. In a twist of fate that smacks of Shakespearean irony, Bagley's psychosis takes the form of a growing carbuncle, more problematic than the-one-every-teen-gets-before-the-prom, because this bad boy can talk. When not spouting off advert-speak, the boil's busy sprouting a moustache or even planning a trip to Paris. In symbolism laid on a bit too thickly at times, Bagley's boil clearly (pun intended) represents everything wrong with the oft-criticized industry, from arrogance to insolence. While not exactly in the same league with Robinson's Oscar-nominated screenplay for The Killing Fields, How to Get Ahead certainly has its moments. Robinson's dialogue is splendid, and Grant comes off as a completely believable nut job. And if a talking zit isn't enough (and it is!), Richard Wilson's performance as the boss of the ad agency is a wonderful mix of senility and scorn. Occasionally a bit preachy with its critique of advertising or the Eighties commodity mindset, this one's still relevant, and that's because Robinson isn't just trashing tactics -- he's trashing an entire industry. If Robinson can just get over his work in the pustule-ridden In Dreams, it's time to start work on How to Get Ahead in the Once-Gilded Dot-Com Age. Wonder what sort of gross appendage could represent the Net?