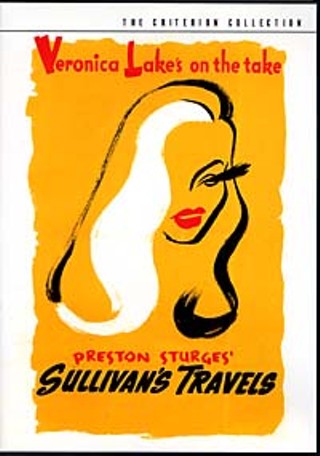 Leave it to Preston Sturges to be the vanguard of an emerging technology more than 60 years after his death. Inventor, playwright, composer, restaurateur-to-be, and the highest paid screenwriter in Hollywood by the time his directorial debut prompted the creation of a "Best Original Screenplay" Academy Award, Sturges paved the way for writer/directors with his storied, seven-picture run (1939-1943) of uniquely outrageous screwball comedies. Now Sturges is the toast of the DVD set. Not only do these two films, both from 1941, reaffirm that digital technology has restored the "glorious" to black and white, they also leave no doubt that Criterion is the Blue Note of DVD labels. Springloaded with special features, The Lady Eve buttresses Barbara Stanwyck's command performance as the reptile in Henry Fonda's ophidian Garden of Eden with a revealing commentary track, Peter Bogdanovich's intro, a complete radio broadcast featuring Stanwyck and Ray Milland, Edith Head's costume design notes, the trailer, and dozens of production stills, candid photos, and studio memos. Even the package design is marvelous. Sullivan's Travels is twice as good. The loose inspiration behind the Coen Bros.' weak-minded O Brother, Where Art Thou?, Sullivan's Travels stars Joel McRea as John L. Sullivan, a director of crass comedies determined to make a serious cinematic statement about the Depression. Featuring a commentary track with Spinal Tap's Michael McKean and Christopher Guest, an interview with Sturges' widow, an archival recording of Sturges reciting a poem and singing one of his songs, and best of all, PBS' Emmy-winning documentary Preston Sturges: The Rise and Fall of an American Dreamer, this disc is as delicious as Veronica Lake in drag. Hopefully all of Sturges' brilliance is due this due. Genius like his is for the ages.