E Is for Everything

Ethan Hawke on "Tape' and Other Triumphs 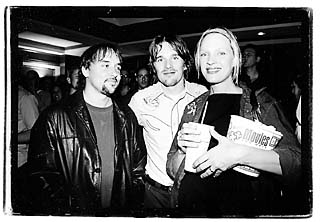 One thing I know, for sure, about Ethan Hawke: He is a loud, loving supporter of Richard Linklater -- quick to praise him, to steer the conversation back to the subject of him, and to pick a fight with anyone he thinks isn't giving his friend and mentor the proper respect.

One thing (okay, three things) I strongly suspect: He likes to hold court (but not in a movie-star way), likes to have the first and last word, likes to be the funnyman ... and, more often than not, gets the laugh.

One thing I can't be sure of, but all signs point to yes: He might be a little bit drunk.

Grubby but down-home proper in a thrift-store cowboy shirt, swinging a beer in one hand and shaking hands with the other, Hawke is easy to talk to and easy to approach. He doesn't even act like he's the reason why everyone is here, at an afterparty following the Paramount Theatre premiere of Tape, Linklater's new film, on Monday night. Giddy and garrulous, the Austin-born 30-year-old is in town to toast a creative collaboration among old friends, most of whom are present.

That alone calls for a couple of beers, but Hawke has several other reasons to celebrate: Tape is earning him, quite deservedly, some of the best reviews of his 15-year career, and this particular convergence in time and space -- "this weird little moment," as he calls it -- marks the culmination of several projects he's been working on for years. Well-received performances in recent films (Training Day, Tape) and theatre (he wrapped a Sam Shepard play in New York last week); his film directorial debut, Chelsea Walls, which he describes as "a giant collage about New York bohemian life," just a few short months away from release; a second novel just handed in to his editor ... his work ethic alone defies the slacker cliché that critics tagged him with seven years ago after the release of the Gen-X comedy Reality Bites. Still, it's a lot of juggling for a hyphenate artist with too many tags to avoid a run-on sentence.

"Yeah, you can imagine how frustrated my wife is with me," Hawke cracked in a phone interview last week from New York, now his home base.

That "frustrated" wife, actress Uma Thurman, was also on hand for the screening and Q&A. Seven months pregnant, Thurman mostly let the others -- husband Hawke, Linklater, and screenwriter Stephen Belber -- answer the questions, but she did garner the biggest laugh of the evening when asked about the status of Kill Bill, Quentin Tarantino's outrageously anticipated ode to spaghetti western/kung fu classics. Based on an idea Thurman and her Pulp Fiction director conceived at a bar one night, Kill Bill positions Thurman as a professional assassin who awakes from a five-year coma to seek revenge -- primarily in the form of, well, killing Bill. The impending birth of Thurman and Hawke's child (the two also have a toddler daughter) has put the production on hold for the time being.

"My future project for the moment is about eight weeks away," Thurman deadpanned to laughter and applause. "Postpartum, I'll go back to killing."

In the meantime, she's garnering equally approving notices for her work in Tape. Based on a one-act by Stephen Belber (who adapted his play for the screen), Tape confines itself to one tense and talky night in a single hotel room. Based in real time, three old high school friends (played by Hawke, Thurman, and Robert Sean Leonard, Hawke's co-star from Dead Poets Society) reunite to provide highly conflicting accounts of one drunken sexual encounter 10 years prior. The project originated out of Hawke and Linklater's mutual interest in digital video.

"Rick and I had been talking, we had had a couple of different ideas about wanting to do something where we experimented with digital film. ... We were trying to figure out what would be the right idea to just go and play with the medium. And then I read this one-act by this guy [Stephen Belber] that I had met here in New York, and I just flipped for it. So I sent it to Rick, not really thinking that we would actually do anything with it. I sent it to him more just to kinda say, 'check this out.' And then he read it, and he was like, 'this is what we should do, we should go play with this.' And then it snowballed from there." 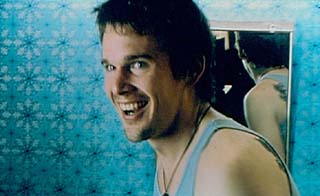 "When I first read this piece, she read it too, and she loved it. I think I kinda, on the sly, passed to Rick that if he thought she was right, I bet if he asked her, she'd do it. Rick doesn't ever do anything he doesn't want to do. So it has to be Rick's idea."

For the final role in the film, Jon, Vince's longtime friend who had a one-time fling with Amy (the nature of that encounter serving as the ethical crux of the film), Hawke and Linklater turned to Leonard (who was unable to attend the screening due to flight difficulties).

"Rick had the idea of casting Robert Sean Leonard, who's one of my oldest friends. He thought there'd be something intangible about casting two people who really had known each other for more than 10 years. 'Cause if you were rehearsing with somebody you didn't know, that's 90% of what you would work on -- that familiarity. With Bob and I that came really easily."

The role of Vince marks a serious departure for the actor. Often pigeonholed into a certain type -- "some kind of quiet, moral-center-of-the-movie ... the audience-surrogate part" -- it was a thrill for Hawke to take on a more aggressive, off-putting character. During his introduction at the Paramount, he coached the audience that the film "is a comedy, so have fun with it" -- a little bit tongue-in-cheek, considering the twisted places Tape goes -- but you get the sense that is exactly what he's doing with the film: having fun with it. The boorish and hyperactive Vince affords Hawke the opportunity to act the part of the coked-up man-child, bouncing from beds and maddeningly goading his old friends into accusations and confessions. There's also zero actorly pretense to the part: Vince is humorously obnoxious, and in that capacity, Hawke gets to chug beer, smoke dope, parade around in his underwear for the majority of the film, even scratch his ass on camera -- not the type of role most "A-list" actors are gunning for.

The role also allows Hawke to show off his precision comedic timing, a gift not always on display in his mostly dramatic film repertoire. In one inspired bit conceived by Hawke, he breaks into a beer-bellied cheerleader chant in boxers and dirty socks: "P is for Party, A is for All Night Long, R is for ..." The irony to this raucously funny moment is that there's nothing party-like about the situation, in which decade-long friendships are unraveling as fast as a frayed cord. It's a commanding and risk-taking performance, and he credits the cast and crew for creating a much-needed comfort zone.

"It's those weird benefits of when you worked with people more than once, that you kind of stop worrying about what you look like, and you stop worrying about if they like you, and you stop worrying whether they're gonna think you're a bad actor. This is my fourth movie I've done with Rick [following Before Sunrise, The Newton Boys, and Waking Life], so there's a trust that is there. On top of that, there's an added intimacy that's created with, like, a seven-person crew on that film."

For Hawke -- whose film Training Day, a big-budget crooked cop drama with Denzel Washington, is still playing well in theatres -- the smaller scope and family-like atmosphere of Tape was crucial.

"When you do things with either a larger budget or with people you don't know, there's so much fear, everybody's so scared all the time. Rick's most peculiar quality -- it's a funny thing you can't teach anybody -- is that he really believes in himself. When I first worked with him on Before Sunrise, [that quality was] what I was most surprised about. I've worked with a couple of people who were very sure of themselves and very confident ... the confidence that brings easiness, not a controlling attitude. But I've never met anybody so young who had that as when we did Before Sunrise. That's a healthy environment for an actor."

Again and again, it comes back to that loud love for Linklater. When we first spoke by phone, he launched immediately into an interrogation about the local media's reception of Waking Life -- he'd heard that some Austin publications hadn't thought much of the film.

"That's what I heard, and I thought, 'Are you out of your mind?' This guy makes the most thought-provoking, creative piece of cinema that anybody's going to make all year -- and it's in your hometown -- and you're going to rip it?"

Well, not personally, but consider yourself forewarned: Mess with Rick Linklater, and you'll have to answer to Mr. Hawke.