Controversial writer Hanif Kureishi teams up again with director Stephen Frears for Sammy and Rosie Get Laid, a vibrant and uneven portrait of a Thatcher-era progressive relationship in perpetual crisis. 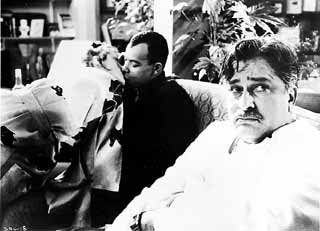 D: Stephen Frears (1987); with Shashi Kapoor, Frances Barber, Claire Bloom, Ayub Khan Din, Roland Gift, Wendy Gazelle. The Anglo-Pakistani writer Hanif Kureishi has carved an entire career out of smuggling "as much filth and anarchy into the cinema as possible." The latest Kureishi-penned film to be run through cinema's rusty old moral-outrage/free-publicity mill is the sexually graphic Intimacy, directed by Patrice Chéreau, but Kureishi's been raising ire and eyebrows ever since 1985's My Beautiful Laundrette, whose frank portrayal of interracial romance promptly earned a boycott from the Pakistan Action Committee, who insisted there were no homosexuals in Pakistan. The ensuing controversy -- and the power of the film -- made indie stars out of actor Daniel Day-Lewis as well as director Stephen Frears, with whom Kureishi teamed up a second time for this vibrant and uneven portrait of a progressive relationship in perpetual crisis. What's most remarkable in Sammy and Rosie Get Laid, though, isn't so much the filth as the anarchy; for Kureishi, sex is always political. The decision of Sammy (Khan Din) and Rosie (Barber) to maintain an open marriage has as much to do with ideology as desire, and the exploded view that the audience is given of their relationship only becomes more complicated when Sammy's father Rafi (Kapoor), a Pakistani politician who may or may not be guilty of severe human rights abuses, seeks refuge in their spare bedroom-cum-library. The shadow of Rafi's abuses -- and the Thatcher-era nightly riots in the interracial couple's crumbling inner-city neighborhood -- give the film an atmosphere of war-zone turmoil in which "a kiss," as the fiercely feminist Rosie reveals, "is never just a kiss." Instead, the film offers multiple takes on sex as statement, as revolt, as colonization -- as an act both destructive and revolutionary. The film's triumphantly perverse climax, in fact, is just that: a three-tiered split-screen of three couples shagging that resembles nothing so much as a national flag and is set to a rendition of "My Girl" sung by a black trio dressed as colonial soldiers. When it hits such giddily subversive high notes, Sammy and Rosie ... transcends provocation and bursts into ecstatic revelation.