The Road to Amnesty in South Africa 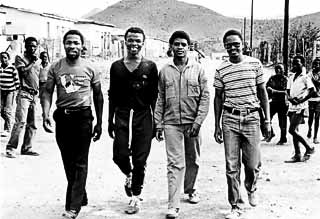 The title of this film says it all, underscored by the opening images of fog and clouds, sky-darkening, stormy ones finally clearing to reveal the light of the sun. This, of course, being the visual metaphor for the task confronting South Africa's Truth and Reconciliation Commission (TRC), created as part of the peace negotiations between the African National Committee (ANC) and the National Party when 40 years of brutal apartheid was ended, at least officially, in 1994. Amnesty for politically motivated human rights violations committed during this era was to be granted only to those who came forward and made full disclosure of their crimes. For Oakland documentarians Deborah Hoffmann and Frances Reid (whose credits include the Oscar-nominated "Complaints of a Dutiful Daughter" and Oscar-winning Common Threads: Stories From the Quilt), this historic first, a truth commission which conditioned amnesty upon full disclosure, combined with the prospect of victims confronting perpetrators, was irresistible -- Long Night's Journey Into Day was a film they had to make.

Not that it would be easy. There were 7,000 petitions for amnesty filed, though more than half were dismissed outright because they did not meet the designated criteria, many seeking to avoid prosecution for nonpolitical, garden-variety crimes. "Given the state of our funding at the beginning, and the distance involved, we had to decide which cases to include pretty quickly; we didn't have the luxury of filming more cases than we would use," explained Reid, recalling how during a two-week visit to South Africa in 1997 she and Hoffmann zeroed in on four cases from the dozens they knew about.

"We knew we wanted a remorseful white perpetrator, so that was Eric Taylor and the murder of four black anti-apartheid activists, the 'Cradock 4,'" Reid explained. "And we wanted to follow a petition that dealt with the most controversial aspect of the TRC, that being that even those who were fighting the 'good fight' -- fighting a corrupt regime -- even these perpetrators were expected to come forward and seek amnesty in the same way that those who'd been trying to uphold the corrupt regime were." That segment follows the story of Robert McBride, the ANC activist who detonated a car bomb that killed three innocent white women. His rationale -- that he sought through violence to subvert the status quo -- is, not surprisingly, unsympathetically received by one of the victims' sisters present at the hearing.

The film also follows the amnesty petitions of the two men who killed American rights activist and Fulbright scholar Amy Biehl and her parents' subsequent confrontation with the mother of one of them. The Biehls did not oppose the amnesty petition; instead, they were very supportive of the process. As an outlet for their grief and to promote their daughter's legacy, they now spend half of every year in SA, setting up community anti-violence programs.

On the other hand, the mother of Amy's killer is overwhelmed with the pain she feels for the Biehl family; she has trouble forgiving her own son for his crime. "We chose the Amy Biehl story because both sets of parents expressed so much empathy and magnanimity," says Reid. "It was an anomalous story for South Africa, but we thought including it would make the film more accessible to an American audience." The fourth case involved the petition of a black policeman and his confrontation with the mothers of black youths killed in a vicious police conspiracy.

The TRC was fully cooperative with the filmmakers. Coming on the heels of a regime of secrecy, the commission -- dubbed the "Kleenex Commission" for its emotional televised hearings -- was committed to absolute transparency and viewed a full public airing of past brutality as a necessary prerequisite for salving deep societal wounds. Nonetheless, there were technical hurdles aplenty. Not least of which was the almost 24-hour flying time between Oakland and South Africa. Or the 10-hour time difference, which meant transacting phone business during the wee hours of the night. Still, the two women managed to shoot 120 hours of footage over a 2 1/2-year period. Their 90-minute film won the Grand Jury Prize for Best Documentary at Sundance in 2000.

Austin Chronicle: This Truth and Reconciliation Commission feels like a strange neither-fish-nor-fowl bird to our American jurisprudence. It wasn't Nuremberg, obviously, but what was it, exactly?

Frances Reid: The TRC hearings were not intended to be judicial proceedings, but they often took on that appearance. The TRC commissioners were selected from all spheres of society, including members of the apartheid government and the ANC.

The Amnesty Committee, one of the three that comprised the TRC, required that the victims be notified so that they could be present if they wished to be. More often than not, they attended. The hearings were held in the vicinity of the scene of the crime so it was possible for the victims to be present. Though painful, it was important for them to hear those stories, and often there was healing. The petitions involving whites killing black activists were the most contested by the victims' families. Much of the black-on-black violence, of which there was a lot, was not contested.

The perpetrator was required to present his case. It was when the victims opposed amnesty that the hearing became adversarial. It was the job of the lawyer representing the TRC to question the applicant to make sure the whole story was being presented. The commission did quite a bit of investigation on its own; it did not simply take the perpetrator's word for it. Sometimes, if the victims opposed amnesty they would hire a lawyer, as in the Cradock 4 case. He conducted a strong cross-examination of the perpetrators, which the commission paid close attention to.

AC:So what conclusions do you draw from your film?

FR: We made this film because we thought the TRC was a new model for looking at human rights abuses and dealing with a history of monstrous inhumanity. I think it's still early, too early to say whether the TRC succeeded in healing a nation; we probably won't know for years. It's clear that what was successful and useful is that there is a kind of history and truth that is now known, placed in volumes of testimony that cannot be denied and which must be acknowledged in order to come to terms with what happened. I don't think that ever happened in WWII; the Nuremberg trials were not successful in the way the TRC was. It was a different model -- when you're trying to prosecute people, you won't necessarily get the truth out of them because they're trying to defend themselves.

Some say, but look at all the problems that still exist in SA, the economic apartheid, racial strife, and AIDS. What they don't realize is that while there are still problems, and the legacy of apartheid is horrible, those were never things that the TRC set out to deal with. It set out to deal with human rights violations that happened within a particular period of time in SA's history. It in some ways demeans the evil of apartheid to think that a commission could hold these hearings for a few years and that would make everything okay.

Many victims feel that reparations and the hoped-for healing have fallen short. Many in the old guard, the National Party, who opposed the TRC from the beginning haven't changed their minds. Ironically, they felt that it was a "witch hunt," but they don't know how good they got it. SA could have had a bloodbath, but it didn't.

AC: Where is the TRC now in terms of completing its agenda?

FR: The Amnesty Committee had its last hearings in June. Most have been decided. Only one case in our film hasn't been decided yet. Robert McBride was granted amnesty. To his surprise, Eric Taylor's petition (the "Cradock 4") was denied because the commission did not feel there'd been a full disclosure.

Long Night's Journey Into Day will be presented as part of the Texas Documentary Tour on Wednesday, November 14, 7pm (ONE SHOW ONLY), at the Alamo Drafthouse, 409 Colorado. Filmmaker Frances Reid will be in attendance to answer questions following the film. Advance tickets are available for Austin Film Society members only by visiting www.austinfilm.org./night or calling 322-0145 by noon on November 13. Remaining tickets will go on sale at 6:15pm on the day of the show. Admission prices are $6 per show for the general public; $4 for Austin Film Society and KLRU members and students. The Texas Documentary Tour is a co-presentation of the Austin Film Society, the University of Texas RTF Dept., The Austin Chronicle, KLRU-TV, and SXSW Film.