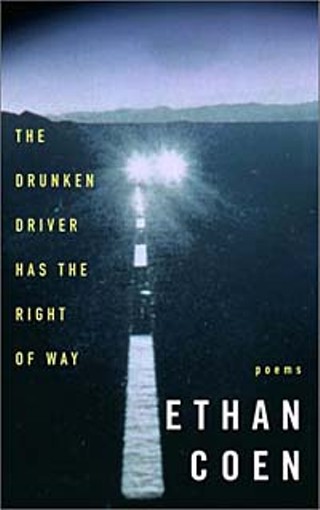 The Drunken Driver Has the Right of Way: Poems

Don't think that just because it offers 18 straight pages of limericks Ethan Coen's second book is a filthy, inconsequential trinket, but don't think it's much more than that, either. The 44-year-old screenwriter/producer has a witty, textured (though often tenuous) command of poetic fixed forms -- unlike, say, Jewel -- but he's not reinventing himself as a poet here, just as he wasn't reinventing himself as a short-story author with 1998's critically embraced Gates of Eden. What he's doing is having fun, squeezing out a little stress, and while that might piss off some of our more serious poets, in the end it's just a quick, capricious read, albeit one with an old soul and deep, earthy wisdom. "However much you plan and pray,/Alas, alack, tant pis, oy we,/Now -- heretofore -- 'til Judgment Day,/The drunken driver has the right of way," Coen winks in the title poem, and that sense of blind chance, of destiny ruling the day, is one we recognize from more than a few of the Coen Brothers' films. Another trait of those films is their diversity and their nods to cinematic history; in The Drunken Driver Has the Right of Way, Coen bounces from Edward Lear nonsense and rollicking sea chanteys to Byronic outcast verse and bombastic balladry, all the while staging a mock battle with some kind of anxiety of influence that borders on the self-indulgent. "If we broke their fingers,/We could stop the poets," he writes in "Solution." "We would also lose the good poems,/Uh-huh,/Like this one,/But consider;/Good poems, bad --/How many of each?" Here, it's about 50-50: Coen succeeds with the simple and bawdy -- the funny -- and falters a bit in his straddling of the sincere and insincere. But, hey, if a guy can make Blood Simple and Raising Arizona and Miller's Crossing in less than a decade, why can't he rhyme about "ripsawlike" farts and Nazi penises and the "public world which I deplore" in less than a hundred pages?