Of Church and State 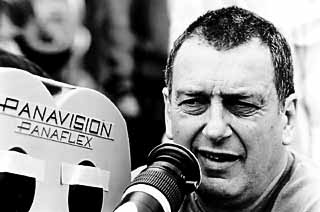 Stephen Frears directs Liam, which opens in Austin on Friday.

If you need a mental picture of Stephen Frears, a little help in wrapping your mind around just how much he has accomplished in the past 30 years and just how little recognition his name might elicit in mainstream moviegoing circles, try this: a big Hollywood premiere, a huge one, a red carpet with wall-to-wall E! coverage, and a crowd including such actors as Albert Finney, Julia Roberts, Glenn Close, Ian Hart, Anjelica Huston, John Cusack, Daniel Day-Lewis, Dustin Hoffman, Billy Crudup, Don Cheadle, and John Malkovich. Writers like Roddy Doyle and Christopher Hampton and Nick Hornby and Donald Westlake and Hanif Kureishi and Alan Bennett. And nothing more than a silhouette in the shape of a 60-year-old Leicester gentleman standing quietly in the booth, behind a projector. Then imagine that same projectionist standing in a London slum, maybe wearing camouflage, surrounded by empty folding chairs and prostitutes, common criminals and crazy old men.

Or I guess you could just look at his filmography. Either way, you get the idea. To call Frears -- whose latest film, Liam, screened at this year's Austin Film Festival and opens in local theatres on Friday -- prolific would be an understatement. To say that he has worked with all the aforementioned artists and many more would be the truth. "It all came together for us in the second half of the Eighties," Frears explains, "us" being he and Kureishi. My Beautiful Laundrette (1985), a gritty, gay love story between a Pakistani and a neo-Nazi set in London, was the duo's first collaboration. They followed it up in 1987 with Sammy and Rosie Get Laid, again set in volatile, Thatcher-era London, again focusing on unconventional love and race relations. Both have a sharp, politically charged humor and sneaky, stylistic dignity that has come to characterize Frears' work.

That work -- sans Kureishi but still coming together in its own right -- has deviated wildly in the years since, whether it be with 18th-century French aristocrats or post-WWII cowboy love triangles or modern-day lovesick record-store owners. Or with impoverished Catholics in 1930s Liverpool, as in Liam, a film that finds Frears' stamp as elusive as ever. It's a modestly made but vividly wrenching story of a family in an era of religious intolerance and emerging fascism, struggling to make ends meet -- as the director did with the film's $3 million budget. "The secret is to spend as little money as possible and hope that people all over the world go to see it two or three times," says Frears of Liam, but watching it even once is emotional enough. The 8-year-old title character is portrayed by first-time actor Anthony Borrows, who consumes the chubby-cheeked, stuttering Catholic-school boy with despair and delight. After his father loses his shipyard job and his sister goes to work for a wealthy Jewish family, Liam is left to find his own way as his First Communion approaches. That way is best articulated by Frears himself, who, after learning of my Catholic background, ended our conversation with "Good luck with your guilt! Good luck with your sexual torment!" He spoke about the film, adapted by Jimmy McGovern from his novel The Back Crack Boys, from London.

So how do you go from High Fidelity to Fail Safe to Liam in such a short time?

Stephen Frears: It's easy, because I only concentrate on the material. I make films from material that I like, and I try to do it under the appropriate economic conditions.

AC: Are you able to realize your vision as a director like that, not writing your own scripts?

SF: I suppose you might say that I don't have a vision in that sense, or I don't have a self-conscious vision. Whatever is consistent about the work is unconscious. I'm sent material, and if I think the material is good I do it.

AC: And Jimmy McGovern sent you Liam, and you liked it? Can you tell me more about him?

AC: As political as Hanif Kureishi?

SF: Oh, I don't know. I've worked with very good screenwriters all my life, and I've been very lucky. ... I've just always had a good time with writers and enjoyed what they've done. And been astonished that they could write what's seemed to be inside my head, even if I had never thought it before. If I read something, I can tell if I feel immediately at home with it.

AC: Some people have pointed to your eclectic filmography and said that you might not have any real passion when it comes to subject matter, more that you simply have a passion for filmmaking in general. But when you place Liam alongside movies like Walter and June and My Beautiful Laundrette and Sammy and Rosie Get Laid, it sort of suggests that --

SF: That there's a sort of consistent account of English life.

AC: That maybe your passion is British realism.

SF: Well, I would say that it's a certain kind of England.

AC: Do you make those films because you feel people need to be exposed to that?

SF: No, I grew up rather in that tradition. You know, when I make the films in America, they're like great adventures for me. But, of course, I want to go home. The material I'm drawn to in England is that kind of material, I can't tell you why. It's just that I grew up making those films.

AC: Speaking of growing up, where did you find this Anthony Borrows? He was wonderful.

SF: He was a Liverpool schoolboy, and someone spotted his talent. He's not a showbiz child at all.

AC: How was it for you working with kids?

SF: God, it's not something that comes natural to me, but I just thought, if you're going to make this film, you'd better have a good boy. And then it was clear that we'd been lucky and found someone very, very good. If you didn't find a good boy, I don't know what you'd do.

AC: As someone born and raised Catholic, I thought the cast, both in their portrayal of home life and parish life, did a great job. It brought back some weird memories, actually.

SF: Is that right? Oh, God. Well, it can't have been that savage [as it was in the film], could it? I think it's not like that anymore.

AC: It was close enough.

SF: Well, I'm sure they still teach you to feel guilty, don't they? I just think you don't get hit quite as much. But if you read accounts of childhood in English literature and Irish literature, you know, that's what Joyce wrote about. Joyce writes about being beaten.

AC: What were some of your other influences when envisioning Catholicism?

AC: Is that where the violent motifs came from, the continual crucifixes and fire? The child's scared-shitless point of view?

SF: [laughs] Yes, well, that was intentional. And that's what Jimmy really described, these nails going in and all of that stuff. It wasn't how I grew up, but when he told me that, I believed him. And enough people have come up to me to say that's exactly what it was like [laughs] ... In a way, you can see that in spite of the savagery, there was also something else going on. Something more humane.

SF: Oh, you know, you're Catholic! You're asking the wrong person!

AC: What about the Catholic Mass itself? In Liam, it's almost like a theatrical farce after seeing what goes on behind the scenes. Was establishing that contrast part of what you were trying to accomplish?

SF: Yes, exactly. It was kind of unavoidable, really. I mean, that was the church Jimmy actually received his First Communion in. In the middle of these very, very poor neighborhoods, here is this church full of dazzling things and paintings and rich tapestries, but they're in the middle of working-class areas, aren't they? Isn't that what Latin America is full of? Extraordinary churches in the middle of crippling poverty. That contrast.

AC: Two or three weeks ago, The New York Times called you the anti-auteur. What does a label like that mean to you?

SF: I honestly think that auteurism is a mixed blessing. You know, there are certain people whom I look up to as artists. [pauses] Curiously enough, the word auteur means literally "Somebody working in a sort of factory whose identity is very distinctive," so people like Hawks and Ford whose identity is absolutely unmistakable. And yet, they were just making whatever they were doing that week. But their sensibility was perfectly apparent. And because I don't write my own material, I can't claim that this is my story or anything like that. Somebody else wrote it, and I directed it. And that's what happened at MGM in the Forties, you know, the Thirties, that was the sort of norm. And then the French, the Europeans, brought in a different way of thinking about things. I sometimes find that auteurism is both a good thing and a destructive thing. And I guess being the anti-auteur means I'm neither.

Liam opens in theatres on Friday. See Film Listings for review and showtimes.