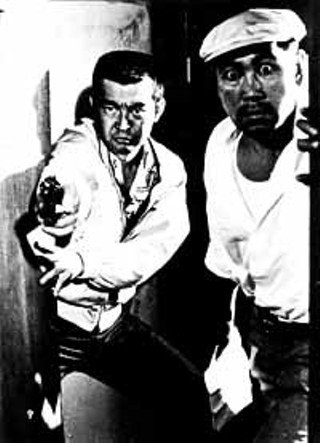 When Kinji Fukasaku was 15, the war his Japan had been waging suddenly ended in the detonation of an atomic bomb. The young Fukasaku, who had been working at an armaments factory -- his time mostly spent cleaning up the corpses of his co-workers killed every day in Allied bombings -- watched as his proud country collapsed into chaos, disgrace, and economic ruin. Years later, Fukasaku would translate those firsthand childhood experiences of Japan's disintegration into a bravura catalog of vibrant and blisteringly angry films that would make him that country's most successful director. But, while Fukasaku is praised by Japanese critics and idolized by filmmakers like Takeshi Kitano and Quentin Tarantino, his many films are largely unknown in America, and only one of them is widely available on video. The Austin Film Society's 12-movie retrospective, "Sympathy for the Underdog: The Films of Kinji Fukasaku," co-presented by the Alamo Drafthouse, offers Austinites a rare chance to watch some of these well-kept secrets in all their lavish Cinemascope glory.

Fukasaku is best known in Japan for attacking, with neo-realist zeal, the yakuza organized crime genre, discarding its antiquated chivalric pretenses in favor of brutal depictions of the back-stabbing and drug-addled moral squalor that characterizes actual mob life. Fukasaku weds his lurid gangland tableaux to a thrilling, kinetic style in which jarring still-frame impositions, scrambled-up film stocks, and colorful explosions of text are punctuated by frequent crimson splatters of gore. His revisionist yakuza films provide, beneath their surface of pulpy cheap thrills, harsh-lit exposés of postwar Japan's demoralized spirit and unflinching dissections of human evil.

Never restricting himself to his signature yakuza genre, the prolific Fukasaku has tried his hand at everything from period epics to the gleefully schlocky sci-fi of his Japan-America crossover The Green Slime (Nov. 24). In fact, his film best-known in the West isn't a yakuza picture at all but the 1967 gender-bending cult classic Black Lizard (Oct. 14), a pop-art confection in which a James-Bond-style detective and a slinky jewel thief (portrayed by a Kabuki transvestite) match lust-addled wits in their fight over a kidnapped nymphet. Adapted by Yukio Mishima from a story by Edogawa Rampo, Black Lizard is a seamless mix of high art and low camp that wraps smoldering poetic dialogue in overripe psychedelic setpieces.

Poised to unseat Black Lizard as the director's most notorious film is last year's futuristic satire Battle Royale (Nov. 11), a controversial box-office hit in which 42 boys and girls are escorted by Takeshi Kitano's government official to a deserted island, given weapons, and told that the last one of them left standing will be allowed to return to society. As on-screen graphics coldly tabulate the number of living who remain, young couples and school friends are forced to brutally slaughter each other in order to survive. That the combatants are 15 years old -- Fukasaku's age when the world as he knew it fell apart -- is no coincidence. In fact, Fukasaku has called Battle Royale both a meditation on his childhood and a dark fairy tale. Like the best fairy tales, Battle Royale, which satirizes Japan's competitive school system while asking difficult questions about innocence and evil, is brimming with troubling primal images. It also proves that Fukasaku, now 71, has lost none of his razor-sharp stylistic edge or burning moral vision.

"Sympathy for the Underdog: The Films of Kinji Fukasaku" begins October 11. All films screen at the Alamo Drafthouse Downtown (409 Colorado). Tickets may be bought in advance at www.drafthouse.com. Call 322-0145 for more information.