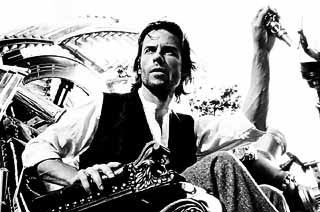 I'll go out on a withered, leafless limb here and say this season's big-screen book club is gonna be crowded. We'll call the club Three Classics and a Maybe, though no matter what you call it, people will line up and people will discuss. They're discussing already, actually, and how couldn't you with the likes of J.R.R. Tolkien's The Fellowship of the Ring ready for release? The first of Tolkien's Lord of the Rings trilogy -- shot consecutively with The Two Towers and The Return of the King -- Fellowship finds Frodo Baggins (the elfin, eerie-eyed Elijah Wood in the role of his 20-year life) and his colorful compadres on the run. With the ring. From the Dark Lord. The trilogy, whose books have sold more than 90 million copies and whose official New Line Web site has seen more than 400 million visits, is in good hands: Peter Jackson (Heavenly Creatures, Meet the Feebles) helms a cast that includes Ian McKellen, Cate Blanchett, Sean Astin, Liv Tyler, and Ian Holm. (Dec. 19)... E. Annie Proulx's cold but hopeful The Shipping News (1993) grabbed the Pulitzer; will Lasse Hallström's (The Cider House Rules, Chocolat) adaptation grab the Academy's gold? Hallström's reputation precedes him, as do Kevin Spacey, Julianne Moore, Blanchett, and Judi Dench's, but the film has reportedly seen as much adversity as Proulx's protagonist Quoyle. (Dec. 25)... Originally slated for an Oct. 19 release, The Count of Monte Cristo, Kevin Reynolds' reworking of Dumas' durable epic, and Christmas' The Time Machine have both flown to February for the fall. The latter, an $80 million special-effects extravaganza directed by Simon Wells (H.G.'s great-grandson), had DreamWorks brass fearing it might get lost in the holiday crowd. The Guy Pearce vehicle also ends with a scene that will face the scissors: chunks of the moon raining down on New York City. (February 2002)