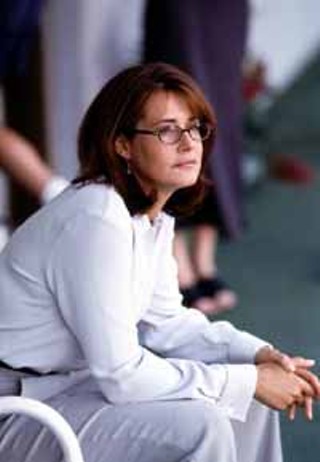 Lorraine Bracco is nominated for her performance in HBO's The Sopranos.

The Primetime Emmy Awards presentation, originally scheduled for Sunday (Sept. 16), has been postponed indefinitely, due to the events that took place in New York City and Washington, D.C., Tuesday. To rant and rave about TV in the wake of this enormous tragedy seems fairly absurd. But perhaps a way to persevere is to allow for the ordinary events of our lives. It's in this spirit that the following Emmy Awards speculation, written prior to the tragic events, is presented.

Lead actor in a comedy series: Ray Romano, Everybody Loves Raymond; Kelsey Grammer, Frasier; Frankie Muniz, Malcolm in the Middle; John Lithgow, 3rd Rock From the Sun; Eric McCormack, Will & Grace. Please! Anyone but John Lithgow, who has won a gillion times already! My pick is McCormack. His refreshingly sophisticated performance gets short shrift only because he's not as flamboyant as co-star Sean Hayes' Jack.

Lead actor in a drama series: Andre Braugher, Gideon's Crossing; Dennis Franz, NYPD Blue; James Gandolfini, The Sopranos; Rob Lowe and Martin Sheen, The West Wing. Will Emmy reward Braugher to make up for the years he was overlooked in Homicide? Doubtful, since Gideon's Crossing was canceled. I think Emmy will go with the charismatic Sheen this year, and so will I.

Lead actress in a comedy series: Calista Flockhart, Ally McBeal; Patricia Heaton, Every-body Loves Raymond; Jane Kaczmarek, Malcolm in the Middle; Sarah Jessica Parker, Sex and the City; Debra Messing, Will & Grace. I'd like to see Kaczmarek rewarded for her riotously funny Lois, though I predict Messing takes the trophy. I suspect Emmy folks consider Kaczmarek's performance too harsh for a TV mom. But she's no worse than Roseanne Arnold (who won in 1993), and a whole lot funnier.

Lead actress in a drama series: Marg Helgen-berger, CSI: Crime Scene Investigation; Amy Brenneman, Judging Amy; Sela Ward, Once and Again; Lorraine Bracco and Edie Falco, The Sopranos. Ward is Emmy's sentimental favorite, though I'd like to see Bracco win for her painful and astonishing performance in "Employee of the Month," the infamous episode in which her character, Dr. Melfi, is brutally raped.

Supporting actor in a drama series: Michael Imperioli and Dominic Chianese, The Sopranos; Bradley Whitford, John Spencer, and Richard Schiff, The West Wing. Though I still believe the WW men are part of an ensemble and shouldn't be nominated individually, Whitford was great in the episodes "In the Shadow of Two Gunmen," in which half the president's staff is gunned down and Whitford's Josh Lyman fights for his life.

Supporting actress in a comedy series: Doris Roberts, Everybody Loves Raymond; Jennifer Aniston and Lisa Kudrow, Friends; Kim Cattrall, Sex and the City; Megan Mullally, Will & Grace. Mullally won last year and may win again, but I vote for Roberts, who plays a busybody like no other.

Supporting actress in a drama series: Maura Tierney, ER; Tyne Daly, Judging Amy; Aida Tur-turro, The Sopranos; Stockard Channing and Allison Janney, The West Wing. I wouldn't be surprised if the tried and true Daly won this year, but I'd like to see Tierney win for single-handedly buoying ER when the beloved Julianna Margulies left the show.

Outstanding comedy series: Everybody Loves Raymond, CBS; Frasier, NBC; Malcolm in the Middle, Fox; Sex and the City, HBO; Will & Grace, NBC. W&G won last year. If it wins again, I wouldn't complain. There's buzz about Malcolm in the Middle this year, but I suspect it's not "nice" enough to win.

Outstanding drama series: ER, NBC; Law & Order, NBC; The Practice, ABC; The Sopranos, HBO; The West Wing, NBC. The West Wing's perfectly calibrated season is what sets it apart from its only other competition, The Sopranos. Though nominated for outstanding writing, The Sopranos season was pockmarked. Whatever became of that Russian thug who Paulie and Christopher were supposed to whack in "Pine Barrens"? What was the payoff of Dr. Melfi's rape in "Employee of the Month"?

Outstanding writing for a comedy series: "Pilot," Ed; "Discos and Dragons," Freaks and Geeks; "Bowling," Malcolm in the Middle; "Easy Come, Easy Go," Sex and the City; "Lows in the Mid-Eighties," Will & Grace. I suspect Emmy will reward the quirky Ed, though I'd love to see the under-appreciated Freaks and Geeks -- canceled after only a handful of episodes -- take the tro-phy.

Outstanding writing for a drama series: "Sec-ond Opinion," "Pine Barrens," "Amour Fou," and "Employee of the Month," The Sopranos; "In the Shadow of Two Gunmen" (Parts I & II), The West Wing. The nominated Sopranos scripts were outstanding, but I suspect Emmy will reward WW. A fair choice, given the complexity of the two-part script and the seamless way it presented the characters' back story to the series.

Ellen DeGeneres is scheduled to host the ceremony.