The Yards works well as an homage to Mean Streets-era Seventies crime movies, but the film's maddening problems with pace and dialogue make it a less enjoyable viewing experience than it could be. 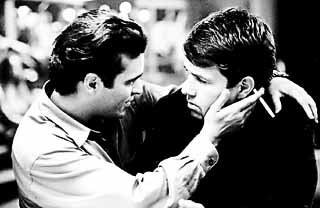 It's so frustrating to see the potential in a film, and then to not see it realized before the closing credits roll. The Yards is a case like that, combining an outstanding cast, gloomy camera work and art direction with a convoluted crime-and-corruption plot. Still, the film plods along at a glacial pace and never gets all the way off the ground. This big can of mixed feelings has Wahlberg as Leo, a young man recently released from prison where he served a few years for auto theft. He tries to get back on the straight and narrow and is referred to his Uncle Frank (Caan) for a job. Frank runs a shop that manufactures and repairs subway cars and only has an opening for a machinist, requiring Leo to do a two-year apprenticeship. Instead, he hooks him up with the "financial" end of the business, with Willie (Phoenix), the boyfriend of Caan's daughter Erica (Theron). Leo soon finds out that Willie is engaged in some very illegal business-related projects, such as extortion, sabotage, and assault. The two go down to the train yards to sabotage another rival company's work when things go awry; Willie murders the yardmaster when the man goes for a pistol, and Leo takes a brutal transit cop's baton away from him and beats him into a coma with it. The cop identifies Leo when he awakens from the coma, and he's a liability to both Willie and Uncle Frank at that point. The story then expands to more grandiose themes of urban political corruption and sleaze. Gray's direction is bleak and humorless, with a color palette that consists of grays, browns, and ochres. The occasional NYC brownout has the screen going black from time to time, which helps contribute to the oppressive tension of key scenes. The action plays out in shabby apartments, grimy train yards, and seedy offices as Gray strives for a noir feel. Actually, the end result seems much more like a Seventies crime film, especially considering the cast, which also includes Steve Lawrence as a corrupt politico, reliable character actor Tomas Milian and Seventies TV icon Tony Musante (looking quite rough these days). Caan sometimes seems to be reprising his Sonny Corleone role, complete with his wardrobe from The Godfather, which is fine except that Caan can play roles like that in his sleep (and sometimes seems to be doing just that). Theron is luminously beautiful, as always, but has little opportunity to do much with her character, while Burstyn (as Leo's ailing mom) mainly tries not to have another heart attack for most of the film. The central performances are those of Wahlberg and Phoenix. Wahlberg's Leo is rather dimwitted and hapless and certainly ill-equipped to deal with life on the straight and narrow. His parole officer invites himself to Leo's welcome-back party, where Leo tells him that he didn't know he was supposed to report to him on his first day back. From there, he continues to fall ass-backward into more trouble, going through all of it with a glassy-eyed, slightly befuddled look on his face. Leo may not be completely guilty, but at the same time he's far from innocent; still, there's a core of decency to his character as he backs out of murdering the comatose cop, then stands on his own two feet by movie's end. Wahlberg's had some great roles (Three Kings, Boogie Nights) and some mediocre ones (The Perfect Storm, The Big Hit -- anyone remember that stinker?): His performance in The Yards falls solidly in the middle. Phoenix, on the other hand, is cruel and remorseless as Willie; unfortunately, Willie is rather one-dimensional in his nastiness, untroubled by questions of principle or conscience. If Gray was shooting for an intentional homage to Mean Streets-era Seventies crime movies, then he certainly succeeded with The Yards, and that's not intended as faint praise. However, the film's maddening problems with pace and dialogue make it a less enjoyable viewing experience than it could be. Let's hope that Gray can live up to his potential for his next film.