When Liz is good, she's very, very good, but when she's bad, she gives it all she's got. 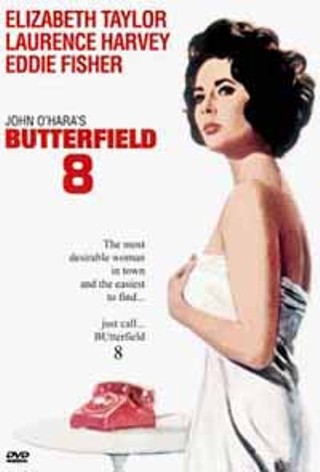 "She's catnip to every cat in town," a bartender says of Gloria Wandrous, call girl and Party Girl No. 1, who is boozing it up, surrounded by a dozen men. Waking up in Wes Liggett's (Harvey) Fifth Avenue penthouse, she discovers he's left her a wad of money and a note saying, "Is $250 enough?" She hurls the money away, scrawling "No Sale" on the mirror with her lipstick. But she seems to forget that she is a call girl, and call girls accept money for services rendered. Unfortunately, Gloria is in love with Liggett, her "John," but he is married to someone else -- a society matron poorly played by the cold, patrician beauty Dina Merrill. As Gloria is leaving, she steals Liggett's wife's $7,000 fur coat and starts all kinds of trouble. It certainly would have caused trouble today -- the entire film is a PETA nightmare, as Gloria can be clocked wearing suede, lynx, coyote, mink, sable, beaver, and something that looks like skunk. The whole movie has Liz in in her last fading bloom of youth, girded to the gills and at the peak of her "eyebrows-of-death" period. Her Gloria-ously voluptuous figure is beginning to bulge and sag, but she is decked out to the nines in drop-dead stylish early-Sixties glamour. At the time, Liz and Jackie Kennedy were neck-and-neck in the glamour department, and the Jackie look is unmistakably present in Liz's styling. Though Jackie's never would be, Liz's cleavage is on abundant display. Cleavage was such a powerful metaphor for sex then -- a set-piece whose effectiveness would be impossible now (you practically have to show actors rutting on the floor to satisfy the modern taste). Liz was also at the peak of her Eddie Fisher period -- playing a harlot onscreen after stealing Fisher away from his real-life wife, Debbie Reynolds, only added to Liz's plummeting reputation. Fisher plays Gloria's friend who loves her but is not taken seriously by her. He's such a drip onscreen that you can't help wondering how in real life this guy managed to attract one of the most glamorous women in the world. The suave and very continental Harvey is equally dull, especially as he commandeers that last 20 minutes of the film. The part of Gloria won an Oscar for Liz Taylor -- mysteriously, since the work is far inferior to many of Liz's previous films. Liz has proclaimed that this is the least favorite film she ever made -- she was simply fulfilling the requirements of her contract. When Liz is good, she's very, very good, but when she's bad, she gives it all she's got. Director Daniel Mann definitely had a way with leading ladies. In addition to guiding Liz toward her Oscar, he did the same for Shirley Booth in Come Back, Little Sheba and Anna Magnani in The Rose Tattoo. Mann certainly excels in these heavy-handed soapers; he also directed Susan Hayward in I'll Cry Tomorrow. Based on the racy John O'Hara novel, the dialogue is dreadful. At one point Gloria tells her shrink, "I don't need you any more. I have no problems. I'm in love," as well as, "Someday Wes is going to find himself, and I want to be there." The script was so bad my companion and I veered off into conversation, missing a scene full of drinking, ultimatums, and arched eyebrows, but we were back riveted to the screen when Gloria screams, "Mama, face it! I was the slut of all time!" Even when shrieking, Liz is irresistible. And like Gloria says in the movie, "I loved it -- every awful moment of it, I loved!"