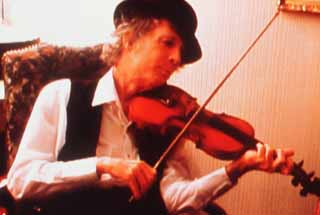 "He holds the whole thing together because it's so much his world," Nick Doob says of the late John Hartford's performance in Down From the Mountain.

Nick Doob's film career is a lot like the musical careers of Down From the Mountain's bluegrass subjects: noteworthy but just barely noted. His camerawork on From Mao to Mozart, the 1980 documentary following violinist Isaac Stern through China, helped score an Academy Award. He has collaborated with famed cinéma vérité pioneer D.A. Pennebaker since the early 1970s, serving as a cinematographer on such treasures as 1993's The War Room, which studies the political voodoo of James Carville and George Stephanopoulos during Bill Clinton's 1992 presidential campaign. And he produced the underappreciated American High, one of "reality" television's few real contributions. But, like musicians the Whites, the Cox Family, and even Alison Krauss, Nick Doob is reaching more people than ever in Down From the Mountain, a homespun, DV-shot second look at the O Brother, Where Art Thou? soundtrack performers, who convened in Nashville for their first concert. He spoke from New York about the documentary, which has spawned a live album and concert tour plans, and his direction (along with Pennebaker and Chris Hegedus) of it.

Austin Chronicle: With its unique association with a major motion picture and a big-selling soundtrack, do you think this will be one of your more successful projects, or do you even think in those terms?

Nick Doob: It's hard to know, you know? I think there's a broader audience for it than people would have thought. But I think people get put off by the idea of a concert film, and I think distributors are worried about that. When you start seeing Emmylou Harris and these kind of banner names coming up, you think this is just a concert film ... but it's a funny little film, 'cause it's not just a concert film. It has its own sort of strange identity.

AC: Was it difficult filming these folks who might not necessarily be used to all this attention?

ND: They're media savvy, and they know what it's like to have a camera in front of them, but I don't think any of them, in a way, had come up against cameras quite like us. We don't do anything. We're just there. ... We're not making a theatrical event out of it. I'm not sure they were used to that, but it was very easy to be around them. They all had big personalities, and the rule on this kind of filmmaking is you don't wanna be the biggest thing that's going on in the room. You wanna be watching the thing that's going on in the room. It was that kind of situation. They had work to do.

AC: Were you a hillbilly music fan going in?

ND: I've always liked it, but no, not really. I think in the beginning we were kind of holding back. If you look at it that way, you can see that as the concert went on, and as people got more and more used to us, we got closer and closer, and there's an intimate quality that gets more so as the film goes along.

ND: She took us in right from the beginning. Everybody was down to earth, but Gillian just has a way of drawing you in.

AC: Did you mean for the film to become an informal tribute to Ralph Stanley, or was I imagining that?

ND: [laughs] It sort of looks that way, doesn't it? I think Penny [Pennebaker] did. He shot some stuff with Ralph at the beginning, always with the intention of that being sort of a stepping-off point. When we were cutting it -- this music all comes from Ralph, Ralph and his generation -- it still kind of made sense even though Ralph is obviously not the center of the concert. There's just a strong, strong feeling about him.

AC: What about John Hartford's presence, as emcee and otherwise? I wanted to know him after watching this. He seemed perfect for the role.

ND: The thing he does for the film that he did in the concert as well, he holds the whole thing together because it's so much his world. He knows everybody. Not to make a big point of it, but the Carnegie Hall concert -- Elvis Costello did it, who is completely charming and wonderful -- but it wasn't the same thing. It wasn't his world. He loves the music, and he knows everybody, I'm sure, but it didn't have that kind of feeling of family that John brought to it. [John Hartford, an ace banjo player and fiddler and much more, died on June 4, 2001, of lymphoma.]

AC: Well, I mean this as a compliment, but the whole film seemed to have that family-home-video feel to it.

AC: Do you take offense to that?

Down From the Mountain is scheduled to open in Austin on Friday, August 24. See Film Listings for theatres and showtimes.