A Guy on a Mission 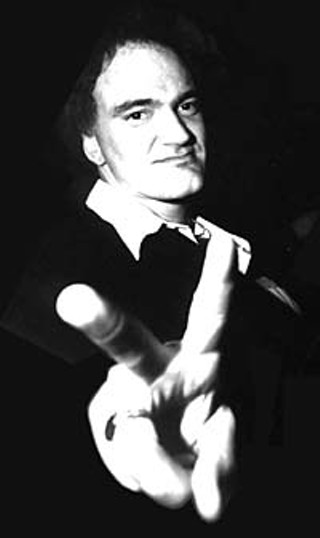 Everyone thinks they've got a handle on who this guy, Quentin Tarantino, is. The films he has directed over the past decade -- Reservoir Dogs (1992), Pulp Fiction (1994), and Jackie Brown (1997) -- have all entered the pop-culture pantheon, and so too has the writer-director. Their many creative achievements are material for the film history books; their cultural impact, however, is immediate and infectious.

The films have earned kudos from cinephiles and an Oscar from the Academy, devotion from pure fans, criticism from any number of special-interest groups who see in them a variety of assaults on a range of moral concerns, and critical scorn from others who delight in pointing out Tarantino's penchant for rampantly "borrowing" from other people's movies.

Add to this Tarantino's outsized personality, which has made the filmmaker a certifiable celebrity whose off-the-set activities are almost as closely watched and discussed as his films. Several spats he's been involved in have aired publicly in the courts and the gossip pages. His longstanding acting ambitions have added to his vulnerability as he's placed himself front and center in a few movies (directed by others) and on the Broadway stage. And sometimes even his staunchest defenders can be heard decrying what they perceive to be his relatively slim volume of output.

Some come to praise him. Some come to bury him. (Ah, the life of a media celebrity.) But one side of Quentin Tarantino is consistently overlooked in these free-ranging points of view: that of the film geek as educator. Tarantino's passion for films is rivaled only by his passion for sharing his enthusiasm with others.

This passion is what brings Tarantino to Austin for the fifth time to host (under the auspices of the Austin Film Society) another of his incomparable 10-day film festivals, wherein he packs up prints from his own collection and elsewhere, ships them to Austin, and presents them in a daily onslaught of double bills, triple bills, and all-nighters. He introduces every program, providing extensive and colorful background on, and free-associating about, the films prior to each unveiling. The selections reflect his interests and tastes, and each night's offerings have a different theme: Kung fu, good ol' boys, Italian crime, and horror are typical of his perennial subjects.

Rather than choosing the more obvious and well-regarded titles in each genre, Tarantino usually goes for the more obscure B programmers. He always has well-articulated reasons for his selections and passions, and conveys them with the animated enthusiasm of a gangly and hyperactive kid who knows he's got the best Show and Tell in the whole damn school. His memory for detail and his comprehensive body of knowledge are always impressive, and the undiluted love he shows for his prints is downright touching. After running through most of the points he wants to make, Tarantino slips into the audience to watch the movie with the crowd, occasionally chiming in with additional comments, afterthoughts, and his distinctive sounds of glee.

Tarantino regards these visits to Austin as vacation time, although it must be said that it's something of a busman's holiday. Still, the filmmaker's idea of a good time is to turn people on to the movies he loves. He is perhaps not so much a teacher as an enabler. You get the impression that little has changed for this film junkie since his early years clerking in an L.A.-area video store. The only real thing his elevated income may have bought him is an upgrade from swapping rare videotapes to collecting rare 16- and 35mm films. Certainly he still spends lots of money on movie posters, only maybe now he splurges and gets his fetish objects framed.

Austin in August may be Tarantino's idea of a perfect time and place for summer film camp (what does it matter when you spend half your time in dark, climate-controlled auditoriums?), but he has also been known to bring versions of his one-man revival show to other locales -- albeit not in 10-day stands. This past June, the programmers at the Seattle International Film Festival invited him to present the Tarantino Tutorials, a four-part study of the films of William Witney, a B-Western director whose career Tarantino regards as sadly neglected (and who he expounded on in a conversation with Rick Lyman in The New York Times the year before). Compared with the personality he most often exhibits at his Austin showcases, the Seattle Tarantino seemed more restrained and pedagogical. Whereas in Austin Tarantino tends to whip the crowd up into a participatory grindhouse frenzy, the Seattle audiences, by comparison, remained quietly attentive while listening to the master's words. Of course it helps that recent Austin festivals have been held at the Alamo Drafthouse Downtown, where beer drinking is actively encouraged.

Critics who frown on Tarantino's widespread appropriation and incorporation of popular culture as key elements in his movies usually fail to see the benefits of this practice, that these borrowings from the past can inform the present. From naming his production company A Band Apart (after Jean-Luc Godard's most playful movie) and his distribution outfit Rolling Thunder (after the title of a great William Devane revenge movie, which is showing during QT5), to including in his movies images that elaborate on film moments that have come before, Tarantino has made a point of passing on what he knows via the medium of film. Anyone who doubts the purity of Tarantino's need to share his pleasures should come watch him introduce Godzilla or Gulliver's Travels to another generation of filmgoers at the QT Fest's annual kiddie matinees. One gets the feeling he's still pretty excited about having the best Show and Tell around.