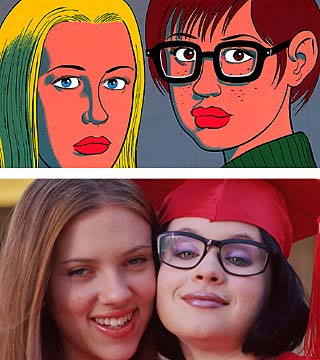 Comic artist Daniel Clowes' Rebecca (left) and Enid are brought to life by Scarlett Johansson and Thora Birch in Terry Zwigoff's dark gem of a movie.

Based on the cult comic book series by Daniel Clowes and directed by Terry Zwigoff of Crumb infamy, Ghost World is an often poignant, frequently hilarious, and occasionally disturbing immersion into the world of 18-year-old Enid (American Beauty's Thora Birch), a teenage outsider who faces the daily tsunami of cultural mediocrity and an uncertain future armed with only her withering cynicism and sullen panache. Along with best friend Rebecca (Scarlett Johansson), Enid wanders through a summer of post-high school malaise, marking time by hanging out in greasy spoons and stalking complete strangers, among then Steve Buscemi's misanthropic Seymour, a 34-year-old obsessive collector of vintage 78rpm jazz records.

To call Ghost World a teen comedy -- as distributor MGM would like to do -- is to miss the point. Fans of the American Pie school of horndog yuks will likely find Zwigoff's precise and economic direction downright confusing, while Birch's turn as the gloomy/artistic retropunk Enid may repel some by hitting too close to home. Who wants to see teens act the way teens really act, anyway?

Apparently, the critics, who have sanctified Zwigoff's dark gem with a four-star geek-chic seal of approval since its New York/Los Angeles opening a month ago, not to mention the audience members who have -- to the shock of MGM -- created some serious (for an "art" film, anyway) box-office numbers.

I spoke with the unprepossessing Zwigoff via telephone and discussed his association with Clowes, the hellish world of the studio pitch meeting, and other outsider filmmaker horror stories.

How was it that you first hooked up with Daniel Clowes? Had you been familiar with his work in Eightball prior to beginning work on Ghost World?

Terry Zwigoff: I hooked up with him in 1994, but I had started reading his work some time before that, probably in the late Eighties. In 1994, Crumb had just come out and I was getting a lot of screenplays sent to me --

AC: I'm curious what sort of scripts "the director of Crumb" would be sent?

Zwigoff: I'd been pigeonholed as the "weirdo" director, so any kind of screenplay that was about a dysfunctional family or some weirdo, I would get. You're never going to get a good screenplay that way, though; the chances are akin to winning the lottery. I had read Ghost World and loved it, but at that time I had never thought of it as a film. I liked those two characters -- Rebecca and Enid -- and thought they were remarkably well-written. They seemed so genuine and so real. They way they acted and talked just seemed ... correct, which is very un-comic-book-like. Most comic books have very one-dimensional characters.

So I actually went over to meet with Dan with the idea of pitching him about writing a screenplay together. I had written two screenplays with Robert Crumb, in the late Eighties, and I'd learned a lot about the craft (although I'd never want to see those get made today). I also felt that I shared sort of a sense of humor and a bit of a world-view with Dan. And then when I met him we hit it off, and I thought he was a very smarmy, very funny guy. We sat down and kicked around some screenplay ideas while my wife kept pushing for Ghost World, and eventually we got down to it.

AC: Did you specifically try to render the film in a non-comic-book palette? It doesn't have that sort of oversaturated feel to it, which is nice.

Zwigoff: Well, I told Dan I was going to make it a more personal film. I told him from the start that I didn't want to re-create the look of the comic, and I didn't want to adapt his comic into a movie. I wanted to take those two main characters, add other characters, add a plot, add a lot of myself to it, and make it something different than the comic. I tried to always think of the script and the film as completely different from the comic. I actively tried not to be influenced by that.

AC: Did you and Clowes go off and pitch this to the studios?

AC: How horrifying was that?

Zwigoff: You can't imagine. I would just go and say the stupidest stuff in the world.

Zwigoff: I'd just walk in there and try to be honest with 'em. I'd say, you know, "What this film has going for it is that it's going to be very different from most films. This is a personal film, and it's not going to be your typical teen comedy. It's going to be something new."

And that's the last thing studios want to hear. They don't want anything new, you know? And it's difficult to even do anything new in that town; it's all set up to sell "product," and they just want to sell the same old shit because they know how to do that.

AC: How was Daniel Clowes during those pitch meetings? Having followed his output over the years, I shudder to think of what the studio suits thought of him ...

Zwigoff: He's a little bit more articulate in person than I am, so that part was good, but he's sort of this real tall, balding, white guy that never sees the sun, this ectomorph type of guy, and I'm sort of like that, too, but I'm short. So we go down to these Hollywood pitch meetings and we walk in there looking like Mutt and Jeff, these two pasty white guys.

The main trouble with Hollywood is that the guys you have to pitch to, the guys who run the studios, are all business school grads. They like to go out and have a pitcher of margaritas, shoot some hoops, have a few brewskis, high-five each other, and drive home and fuck some whores, you know? They're like an alien species to us, and I'm sure to them we just look like total losers.

AC: Did you have a literal pitch to give to them?

Zwigoff: Well, you know, they want you to be able to explain the entire film in one or two sentences, and I understand that, that's how the system is set up. You have maybe a 10-second television spot or a newspaper ad, and you have to get across what the movie's about. And if it's about a guy fucking an apple pie, then you're home free. But with this film it was sort of difficult because the comedy is very nuanced and subtle.

I told them, well, it's sort of a comedy about alienation, and boy, they didn't want to hear that. But at the same time, now that it's completed, people seem to be connecting with it precisely because there's a lot of alienated, angry people in America. And enough of them are going to see the film that it's become quite surprising to these businessmen. They're very shocked that this film is making some money.

AC: Your casting is perfect, through and through. Did you have to fight to get the actors you ended up with?

Zwigoff: Well, in anticipation of a few interviews, I actually pulled together a few of the casting suggestions that we got early on. Ready? Okay: For Enid, we had Angelina Jolie. She's like, what, 30 years old and she's going to be playing 18? Unbelievable. We had Drew Barrymore. Jennifer Love Hewitt was at the top of everyone's list because she had just made a hit film. I have nothing against her personally. She's just too old for this film and too happy and well-adjusted. For the role of Seymour we had Jake Busey, Kelsey Grammer, and Ray Romano (that would have been hilarious). For Josh [Enid and Rebecca's much-abused pal and secret crush, played by Brad Renfro] they wanted Beck --

Zwigoff: I'm not really sure. I don't even know who half of these people on this list are. ... And then you tell them you want Steve Buscemi for Seymour and they don't want him at all. He's not box-office, he's not in a hit TV show, and they don't like him. They were giving us suggestions like Russell Crowe and Harrison Ford. Those are actually the suggestions we got for Seymour. But that's Hollywood.

Ghost World is scheduled to open in Austin on August 24.